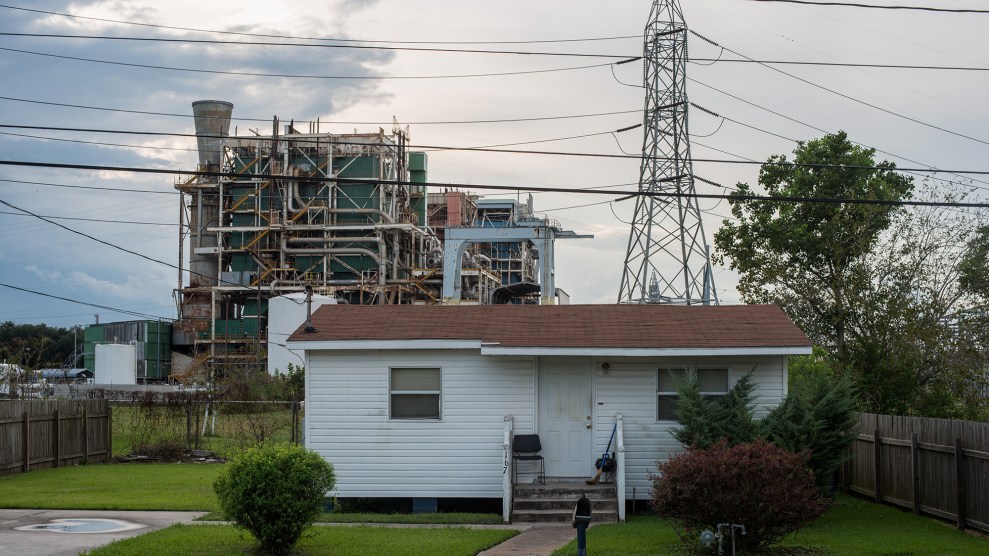 A house sits along a long stretch of River Road by the Mississippi River dubbed "Cancer Alley" because of the many nearby chemical plants. Giles Clarke/Getty

This article was originally published by ProPublica, a Pulitzer Prize-winning investigative newsroom, and it was produced in partnership with The Times-Picayune and The Advocate, which is a member of the ProPublica Local Reporting Network.  Sign up for The Big Story newsletter to receive stories like this one in your inbox.

Louisiana health officials plan to knock on every door within 2.5 kilometers of the controversial Denka Performance Elastomer plant in St. John the Baptist Parish in hopes of determining exactly how many people in the neighborhood have developed cancer.

The Denka plant is the only one in the country that emits chloroprene, which was classified as a likely carcinogen by the U.S. Environmental Protection Agency in 2010. The plant is in the heart of Louisiana’s industrial corridor, which already has some of the most toxic air pollution in the nation, and where a wave of new petrochemical plants is expected to worsen air quality in already overburdened areas, according to an analysis by ProPublica and The Times-Picayune and The Advocate.

Over the last decade, there has been a steady drumbeat of increasingly worrisome news about the Denka plant’s emissions. In 2015, the EPA released an analysis saying the airborne cancer risk in the census tract nearest to the plant was the highest in the nation.

But Louisiana officials have sought to downplay the risks. Chuck Carr Brown, secretary of the state Department of Environmental Quality, has repeatedly expressed doubts about the EPA’s analysis and complained of “fear-mongering” by activists.

Jimmy Guidry, the state’s top health officer, has also stressed in public meetings that Louisiana officials have found no evidence of higher cancer rates in the vicinity of the plant.

Community members have continued to voice concerns, however, and despite significant reductions in emissions in recent months, the plant is still releasing chloroprene at well beyond the level of 0.2 micrograms per cubic meter that the EPA has said is safe.

Three months ago, the Louisiana Department of Health announced plans to conduct a first-ever scientific inquiry into cancer cases around the plant. The announcement came just over a month after an activist group, the University Network for Human Rights, released its own study on cancer rates.

The group used student volunteers to collect information from residents and concluded that cancer rates were well above normal in the neighborhoods around the plant.

But that study was criticized for its methodology — in particular for its failure to verify the cancer claims made by residents by examining medical records or through some other source. Many residents are plaintiffs in lawsuits against Denka and DuPont, the plant’s prior operator.

The new study is designed to be more scientifically rigorous than the July study. While state health officials are still seeking community input, they released a draft of their blueprint in mid-November.

The plan calls for sending graduate students from the Louisiana State University Health Sciences Center in New Orleans to every household within a 2.5-kilometer radius of the plant, essentially the same footprint surveyed in the advocacy group’s study. The area includes about 1,900 households, officials said; the students visit each one to gather information about every case of cancer involving a member of the household.

Researchers will attempt to match that information with data previously gathered by the Louisiana Tumor Registry, an arm of the Health Sciences Center that is charged with cataloging every reported case of cancer in the state. If the tumor registry does not have a record of the cancer case, the resident will be asked for medical records to substantiate the claim.

The survey could serve to inform residents about local cancer rates, as well as to offer a clearer picture of whether the Louisiana Tumor Registry is capturing every case of cancer that occurs in the state.

State health officials say that they go to great lengths to document every cancer case. But some activists have expressed skepticism about the tumor registry’s accuracy. It has been a difficult debate to settle independently, because tumor registry officials, citing medical privacy laws, say they cannot release information that could identify specific cancer cases.

As a result, the registry for years released cancer cases only on a parish-by-parish basis. More recently, the registry has started releasing them at the census tract level. However, census tracts are still relatively large, and in the case of Denka, the surrounding tracts include both areas that are quite close to the plant as well as ones that are at least a couple of miles away.

Louisiana health officials have said they want to share the results of the study with parish residents, although medical privacy laws may still bar them from presenting a granular view of where they found cancer.

In a statement, Jim Harris, a Denka spokesman, said the company “welcomes any additional studies that are based on sound scientific methodology and conducted by credentialed health research professionals. It is also important that any study be peer reviewed by experts.”

Harris also noted that the most recent data from the state tumor registry showed that “the number of all cancer cases combined in St. John the Baptist Parish and in the census tracts close to the facility were not statistically different than the numbers for the state.”

Robert Taylor, a leader of the activist group Concerned Citizens of St. John, also welcomed the new research, but he said officials suggested to the community that their real aim was to bolster Louisianans’ faith in the work of the tumor registry — rather than to protect residents.

“How does a well-established, well-respected tumor registry translate into relief for us?” he asked.

But, he added: “If we can help you establish credibility and you’re going to use the credibility to help us, we’ll be willing to do whatever is necessary to help protect our community from this plant.”

While the study will focus on cancer, residents may report other health issues to the researchers.

“We are trying to collect as much information as they provide,” and that data could inform future investigations, said Dr. Edward Trapido, associate dean for research at LSU’s School for Public Health.

Officials expect to hold a final community advisory meeting in the next few weeks and to have students in the field before the end of the year. The study could be done sometime in late 2020.

Hugh “Skip” Lambert, a lawyer representing many of the plaintiffs, including Taylor, said that if the study is done properly, he expects it will confirm the findings of the advocacy groups.

“I’m happy the new study is being done,” Lambert said. “I just hope it’s being done in a way that captures reality. If it’s done properly and it’s done objectively, it will confirm that there are way too many cancers in that area.”