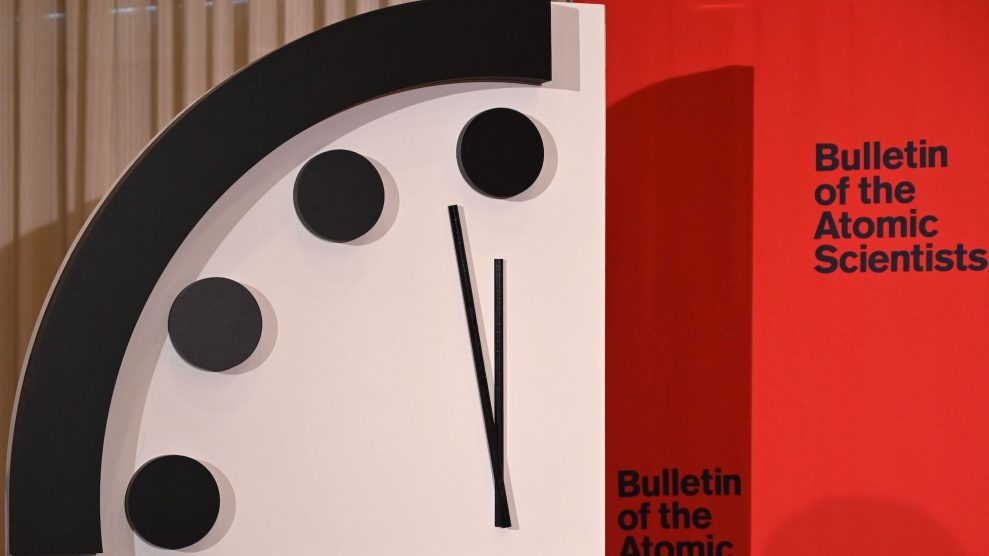 The Doomsday Clock reads 100 seconds to midnight, a decision made by The Bulletin of Atomic Scientists.Eva Hambach/Getty

Thursday morning, scientists responsible for maintaining the Doomsday Clock—a metaphor for how close mankind stands to its own destruction—announced that it advanced 20 seconds from last year, to within 2 minutes of midnight, the bookend marking human extinction. The clock is maintained by The Bulletin of the Atomic Scientists, a non-profit founded in 1945 by nuclear scientists who were involved in the Manhattan Project in order to monitor human-made existential threats. This is the first time since the clock was created in 1947 that the hands have come so close to midnight. The science and security board of the Bulletin explained some of the reasons for the alarming time change: World leaders have stalled nuclear de-escalation, failed to address the rising tides of the climate crisis, and continued to invest in potentially dangerous technologies.

Jerry Brown, the executive chair of the Bulletin and four-term former governor of California, appeared at the Washington, DC, event and admonished policy makers for their failure to meaningfully confront the threats. “I’ve spent my life seeking the favor of these powerful people” he said. “Most of them are totally ignorant, blind, and deaf to our predicament. The task is wake up! Wake up America, wake up the world!” This is the time, he said, that average citizens had to pressure governments instead of waiting governments to take the lead.

The Doomsday Clock was originally envisioned to exclusively track nuclear proliferation, but in recent years it has added climate change and now unrestrained technological growth as under-addressed threats to the future. Those hazards brought the clock’s arms past the two-minute mark, which is where they sat during the Cuban Missile Crisis, considered by many the closest humanity came to self-destruction. But even then, they did not move as close to midnight as they did today.

Climate change is one factor that has made the world more dangerous. During the announcement, experts pointed to a lack of urgency by national representatives during 2019’s international climate conferences. COP25, for example, was panned by the media as little more than an empty display by some countries, despite the scientific evidence pointing to the serious consequences of a warming world. UN secretary-general, António Guterres, described himself as “disappointed” with the outcome. Even a slight variation in the world’s average temperatures—which have already increased one degree Celsius in recent history—could doom human civilization.

“Government policies are hardly commensurate to an emergency,” Sivan Kartha, a senior scientist at the Stockholm Environmental Institute who spoke on climate inaction at the Bulletin’s announcement, said. Kartha pointed to the last Ice Age, when average global temperatures were only five degrees lower than today’s. “Let me put it into perspective,” he said. “During the depths of the last Ice Age, the earth was only a few degrees colder, yet its surface was utterly transformed.”

That doesn’t mean all is lost on the climate front, Kartha said. He spoke optimistically about the swift increase in public alarm over the climate threat, which could prompt greater efforts to address the crisis. That’s more than can be said for nuclear proliferation.

“While public pressure gives us a sliver of hope on climate, the opposite is true on nuclear,” said former president of Ireland Mary Robinson, who chairs The Elders, a non-government organization founded by Nelson Mandela in 2007, whose members include former world leaders like former UN official Ban-Ki Moon and Jimmy Carter. The Elders were charged with the responsibility for revealing the Doomsday clock update at the event. “As long as nuclear weapons are in existence,” Robinson said, “it is inevitable that they will eventually be used, whether by accident, miscalculation, or design.”

A year of failed negotiations between the United States its adversaries—Iran and North Korea in particular—added to the sense of urgency. And despite having offered to discuss stronger anti-proliferation treaties, Russia ended the year by unveiling a supersonic missile system called Avangard. Robinson urged world leaders to fully recognize that using nuclear weapons as pawns in diplomacy games carry great risks. Instead she proposed declaring a moratorium on threats to use them, ramping down missile programs, then dramatically reducing the number of them. In response to Vladimir Putin’s offer to meet with the United States on the issue, Robinson said, “I urge President Trump to respond in kind.”

In terms of civilization-ending weapons, the chances of their use increase with the prevalence of disinformation technology, one of several recent “disruptive” technological advancements that fuel a highly-charged world stage, in which momentary misunderstandings or manipulations can trigger actions that could lead to sudden extinction. Robert Latiff, a retired US Air Force general who sits on the Bulletin’s science and security board, listed artificial intelligence, hypersonic weaponry, biological threats and outer space conflicts as variables that further garble humanity’s effort to evolve beyond conflict. “An uneasy equilibrium exists around the world,” he said. “A simple mistake in a world bristling with weapons is all it takes for a war to start and escalate catastrophically.”