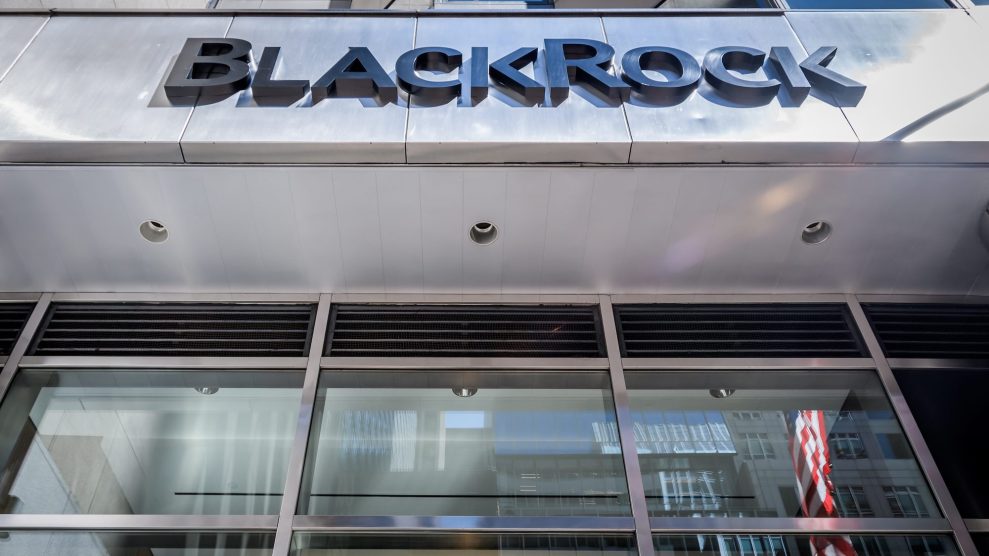 This piece was originally published in the Bulletin of Atomic Scientists and appears here as part of our Climate Desk Partnership.

On Tuesday, January 14, the New York Times ran a story in its “Dealbook” business section that contained some startling news. Larry Fink, the founder and chief executive officer of the world’s largest asset manager, BlackRock, announced that his firm would fundamentally shift its investing policy to focus on climate change. The idea is for BlackRock—a firm overseeing $7 trillion in investments—to get out of coal and other fossil fuels, which he called a “high sustainability-related risk.” In fact, said the Times, “His [Fink’s] intent is to encourage every company, not just energy firms, to rethink their carbon footprints.”

In his annual newsletter, Fink went into more detail, saying that BlackRock would introduce new funds that shun fossil fuel-oriented stocks, move aggressively to vote against management teams that are not making progress on sustainability, and press companies to disclose plans “for operating under a scenario where the Paris Agreement’s goal of limiting global warming to less than two degrees is fully realized.”

In a subsequent interview with the Times, Fink went on to explain that this decision was a bit of enlightened self-interest. We are fiduciaries, he told the newspaper; “Politics isn’t part of this.” Or, as he put it in his closely scrutinized newsletter: “Will cities, for example, be able to afford their infrastructure needs as climate risk reshapes the market for municipal bonds? What will happen to the 30-year mortgage—a key building block of finance—if lenders can’t estimate the impact of climate risk over such a long timeline, and if there is no viable market for flood or fire insurance in impacted areas? What happens to inflation, and in turn interest rates, if the cost of food climbs from drought and flooding?”

Just the fact that the head of the world’s largest investment firm wrote this in his newsletter—and repeated it to the very public forum of the New York Times—has an enormous impact. It will likely affect the calculations of every chief executive officer in a public company affected by climate change. It will make all their attorneys, auditors, and accountants ask their CEOs if climate impacts are correctly reflected in SEC filings.

Of course, there could be a “a touch of greenwashing” here—echoing an earlier observation made by billionaire British hedge fund activist Christopher Hohn, who called the firm’s previous climate efforts “appalling” and “full of greenwash,” according to the Financial Times. Environmental organizations such as Ceres said that BlackRock has some of the worst records when it comes to issues dealing with climate change. Similarly, data collected by ProxyInsight found that BlackRock opposed more than 80 percent of climate change-related motions at fossil fuel companies between 2015 and 2019, The Guardian said.

And Fink made it a point to emphasize that while he intends for BlackRock to consider climate risks, he was not pursuing a complete, across-the-board sale of energy companies that produce fossil fuels. Because of its sheer size, BlackRock would likely remain one of the world’s largest investors in fossil-fuel companies. (The company holds a 6.7 percent stake in Exxon Mobil, 6.9 percent in Chevron, and 6 percent in the mining company Glencore, CNBC reports.)

Still, Fink’s move to transition clients away fossil fuel and toward renewables could put the pressure on some other large financial firms in the United States to make similar moves—including such financial behemoths as JPMorgan Chase, Vanguard, and T. Rowe Price.

Ironically, if Fink had pulled BlackRock funds out of fossil fuels a decade ago, “his clients would have been well-served,” the Times noted. The energy sector gained only two percent in that time frame, while the broader S&P 500 nearly tripled—showing that there can be serious money to be made by getting out of companies that contribute to climate change.