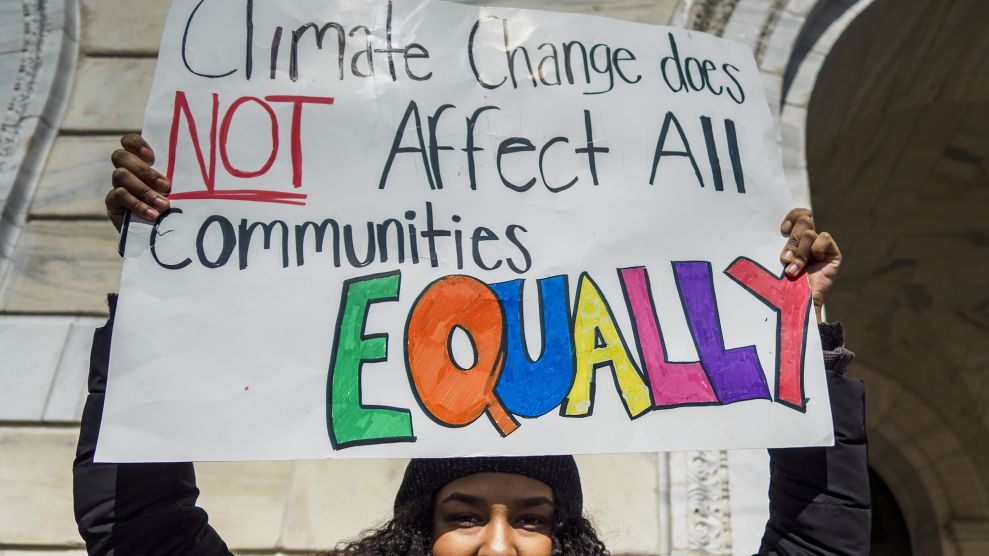 Climate breakdown and the global crisis of environmental degradation are increasing violence against women and girls, while gender-based exploitation is in turn hampering our ability to tackle the crises, a major report has concluded.

Attempts to repair environmental degradation and adapt to climate breakdown, particularly in poorer countries, are failing, and resources are being wasted because they do not take gender inequality and the effects on women and girls into account.

Campaigners called for governments and institutions to take note, saying that the impacts on women and girls must be at the heart of any viable strategies on the climate and ecology.

The International Union for the Conservation of Nature (IUCN) carried out what is understood to be the biggest and most comprehensive study yet of the issue, taking two years and involving more than 1,000 sources of research.

Six in 10 respondents to a survey by IUCN, with more than 300 responses from organizations around the world, said they had observed gender-based violence among female environmental rights defenders, environmental migrants and refugees, and in areas where environmental crimes and environmental degradation were taking place. More than 80 case studies clearly showing such links were uncovered as part of the research.

Gender-based violence includes domestic violence, sexual assault and rape, forced prostitution, forced marriage and child marriage, as well as other forms of the exploitation of women. The report found human trafficking rises in areas where the natural environment is under stress, and links between gender-based violence and environmental crimes such as wildlife poaching and illegal resource extraction.

“Gender-based violence is one of the most pervasive but least talked-about barriers that face us in conservation and climate work,” said Owern. “We need to take the blinders off, and pay this concerted attention.”

Owren found abundant examples of the close links between gender-based violence and the exploitation of women and girls, and the competition for resources engendered by the impacts of global heating and our destruction of the natural environment. For instance, sexual abuse was found in the illegal fishing industry in south-east Asia, and in eastern and southern Africa fishermen reportedly refused to sell fish to women if they did not engage in sex. The illegal logging and charcoal trade in the Democratic Republic of Congo is linked to sexual exploitation, and in Colombia and Peru illegal mines are strongly associated with an increase in sex trafficking.

There have also been numerous examples of gender-based violence directed against environmental defenders and activists, who try to stop the destruction or degradation of their land, natural resources and communities. Sexual violence is used to suppress them, undermine their status within the community and discourage others from coming forward.

Yet few projects that are aimed at conservation and improving the environment, or tackling the climate crisis, display any recognition of these issues, according to the report.

Global heating puts pressure on resources, as extreme weather, including heatwaves, droughts, floods and fiercer storms, grows more frequent and devastating. In most parts of the world, women are already disadvantaged and lack land rights and legal rights, so are vulnerable to exploitation. When the additional stresses caused by the climate crises bite, they are the first to be targeted. For instance, in some communities, young girls are married off as early as possible when the family faces hardship exacerbated by the climate. Globally, about 12 million more young girls are thought to have been married off after increasing natural disasters, and weather related disasters have been shown to increase sexual trafficking by 20-30 percent.

Women and girls are also burdened with tasks such as drawing water and finding firewood, which are becoming more scarce in many areas under the ecological impact of our scramble for resources, and which expose them to further dangers of violence.

Grethel Aguilar, acting director-general of the IUCN, said: “Environmental degradation now affects our lives in ways that are becoming impossible to ignore, from food to jobs to security. This study shows that the damage humanity is inflicting on nature is also fueling violence against women around the world – a link that has so far been largely overlooked.”

At the UN climate conference in Madrid last December, governments were criticized by campaigners for ignoring the plight of women and children and the threats they face.

Some governments are moving to put action for women and girls into their climate and development policies, and the UN in Madrid moved to include a gender action plan as part of the climate negotiations. Campaigners and some countries are hoping for even greater focus on the issue at the crunch UN climate talks in November, to be hosted by the UK in Glasgow.

There have been numerous examples of gender-based violence directed against environmental defenders and activists, who try to stop the destruction or degradation of their land, natural resources and communities.

The UK’s department for international development said it was already factoring in gender issues in climate change funding, including a large-scale study on violence against women and girls during the humanitarian crisis in South Sudan, where about three quarters of women and girls who had been in a relationship experienced violence at the hands of their partner. A spokesperson said: “Women and girls can be disproportionately affected by climate change. This is why we’re spending UK aid on helping to promote gender equality, as well as leading the fight against climate change.”

Bob Ward, policy and communications director at the Grantham Research Institute on climate change and the environment at the London School of Economics, who was not involved in writing the report, said: “This report highlights the complex but clear link between growing climate change impacts and violence against women and girls.”

He pointed to the role that female campaigners were playing in bringing the world’s attention to the problems. “When we see the inspiring leadership of female activists like Greta Thunberg, we should recognize that the lives and livelihoods of women and girls around the world are particularly threatened by climate change,” said Ward. “The empowerment of women and girls and their protection from the direct and indirect consequences of climate change must lie at the heart of the just transition to zero-carbon and climate-resilient societies.”

The report also provided a timely reminder that “concerted action to tackle inequality can unlock new opportunities for climate action and women’s empowerment,” added Mary Robinson, chair of The Elders. “We need to recognize the unequal effects of the climate crisis on women, but also that women’s participation brings with it creative and sustainable solutions to both the climate emergency and social injustices. Tackling climate change and environmental degradation without the full inclusion of women will not succeed: gender equality is a prerequisite to the collective effort needed to address the climate emergency.”