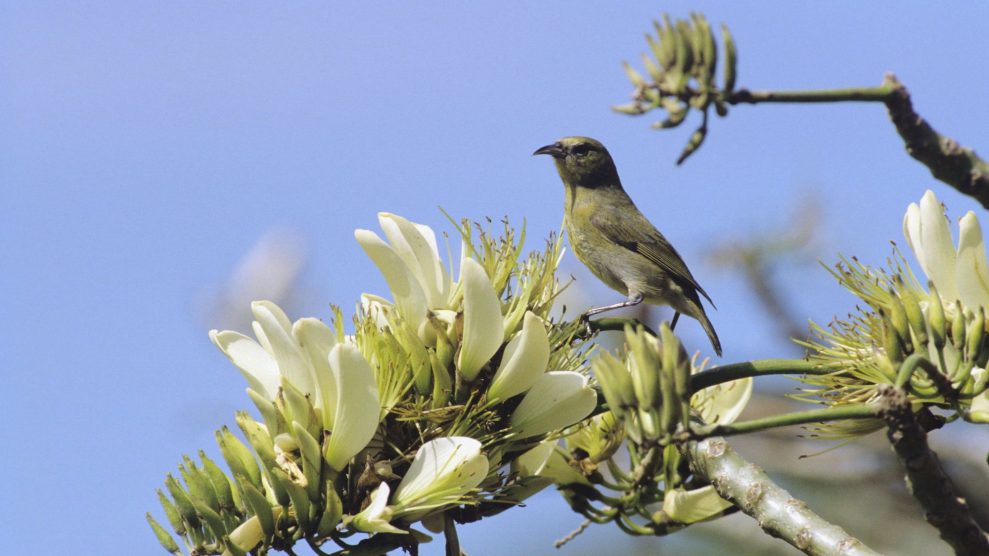 The sounds of Kauai’s forests are changing. Thirty years ago, David Kuhn could hear a dawn chorus and identify the many different birds that lived on the Hawaiian island. But more recently, Kuhn, a wildlife recordist based on Kauai, began noticing that not only are the forests becoming quieter, it’s becoming increasingly difficult to tell the remaining birds apart by their songs.

Investigating further, in 2014 he recorded a native honeycreeper, an akekee, singing the songs of other endangered honeycreeper species. “That confirmed my confusion up to that point,” says Kuhn. “I thought, what the heck, these guys are starting to sound alike.”

The disappearance of songs can reduce the ability of bird populations to reproduce and survive, making life even more precarious for endangered forest species.

Kuhn’s discovery prompted research into the plight of three of Kauai’s six remaining honeycreeper species: the anianiau, the Kauai amakihi, and the akekee. His hunch was correct—the three species now sing much more similar songs, with less complex vocal signals, due to the decreasing size of their populations, especially among mature birds that pass on song repertoires to younger offspring. It’s the first time this type of behavior among endangered birds has been recorded, says Kristina Paxton, lead author of a paper on honeycreepers published last year in the journal Royal Society Open Science, and a postdoctoral researcher in the Department of Biology at the University of Hawaii at Hilo.

There is far more at stake than the loss of beautiful songs. Birdsong plays an important role in mate attraction and selection, communication about food resources and predators, and the selection of breeding territories. The disappearance of songs can reduce the ability of bird populations to reproduce and survive, making life even more precarious for endangered forest birds like those on Kauai.

Above, a recording of an akekee songbird as recorded on the island of Kauai more than a generation ago. Audio: Douglas H. Pratt

The songs are culturally transmitted—learned from parents and other birds in the environment where young birds are maturing. But if young birds don’t hear songs, they won’t learn them, and the lack of repertoire could create problems when it’s time to find a partner and reproduce. “I don’t think we often think about these behaviors that are also really critical to the survival of the species, and how the loss of those could also be a compounding effect of population loss,” says Paxton.

Paxton gathered 40 years’ worth of sound files from the Macaulay Library at the Cornell Lab of Ornithology as well as her own recordings and those from Kuhn and Justin Hite, another of the paper’s authors, to analyze the acoustic characteristics of honeycreeper songs over time, such as how long they lasted, how many syllables (very brief repeated song elements) they contained, frequency changes, and note range. Beginning in the early 2000s and through to 2017, the songs’ variety and complexity significantly decreased. Not only are the three honeycreepers singing the same songs, but the songs themselves contain fewer syllables, fewer notes within those syllables, and fewer frequency changes.

Paxton’s experience in the Kauai forest echoes Kuhn’s. She has spent 20 minutes following male anianiaus and akekees without hearing a single song. She believes that is because they have no reason to sing out a predator warning or a mating call if there’s no one around to hear. “If your territories are so far apart, and there’s so few birds, why vocalize out to the birds around you?” she says.

Six of the seven birds native to Kauai’s forests are in a state of precipitous decline. Twenty-five years of population data shows dramatic decreases among honeycreepers—57 percent for anianiau, 91 percent for the Kauai amakihi, and 98 percent for the akekee in their home ranges between 2000 and 2012 alone. The birds have been pushed to small forested areas; the akekee and anianiau are now only found in very small ranges in remote areas of the Alakai Plateau, spanning the central to northwest region of the island.

The losses are linked to a variety of factors, including climate change, invasive flora, and non-native animals, including introduced birds, some of which were imported in the early 20th century to replace endangered native species, thus hastening further decreases. “There was a really large decline in birds, and people decided to bring in their favorite birds from Europe and other places to be able to hear a morning chorus,” says Paxton.

Non-native birds also brought avian malaria. Once mosquitoes were accidentally introduced, malaria was vectored to native bird species, which have not developed the resistance that non-native birds have. Their one defense was to move to forests in higher elevations that were too cool for mosquitoes to survive. But even that is no longer a secure redoubt—the warming climate means mosquitoes and diseases are surviving there, too.

An interesting result of Paxton’s honeycreeper research is that it documents the loss of both population and cultural diversity—the different socially learned behaviors unique to different animal groups—says Alison Greggor, a postdoctoral research associate at San Diego Zoo Global’s Institute for Conservation Research, who wasn’t involved in the study. The research “shows that there are fewer distinct families reproducing” because the young “would learn their songs from their parents,” she says.

The loss of cultural diversity can impact a species’ chances of survival, which is particularly important in the face of climate change, says Adolfo Cordero-Rivera, a professor of ecology at the University of Vigo in Spain, who coined the term ethodiversity for animal populations to encompass the diversity of behaviors that are culturally transmitted, originate genetically, or are learned individually. “We don’t know how the environment will change in the future, and which can kind of behaviors will be useful when the environment changes.”

At the moment, the survival of the Kauai honeycreepers and other highly endangered birds may depend on captive breeding programs. But cultural behaviors, like songs and foraging skills, haven’t yet been incorporated into many of those programs, says Greggor. “The behavior of animals in conservation breeding facilities before they’re being introduced into the wild is something that is gaining more attention,” she says. “Previously, people would put animals out and then maybe come back six months later and say, ‘Oh, there are this many still alive.’”

But that approach may be changing. A captive breeding program for the akekee and akikiki (another endangered honeycreeper) at San Diego Zoo Global’s Keauhou Bird Conservation Center uses recorded Kauai soundscapes as part of their pre-release training.

In other programs, mature birds are used to train young birds in cultural behaviors before they’re released in the wild, providing parental rearing instead of the usual hand rearing by humans. The benefits are important, Greggor says, because many birds have a critical period when they learn vocalizations and need to hear and see a tutor to learn and make the connection between sound and behavior.

Some birds need that training very early. Greggor points to evidence that some bird species begin learning even before they’ve hatched. “As soon as their ears start developing, they’re listening for the sounds that are going on around their nest,” she says. “Right after that they can already discriminate between what they’ve been exposed to, and what they haven’t been.”

This shows that the natural diversity of birdsong is culturally learned, instead of innate, she says, which is also supported by other recent research.

One thing is certain: Once cultural behaviors are lost in a given species, they can take a long time to restore. Research analyzing the migration patterns of reintroduced bighorn sheep and moose found that it took several decades before they rediscovered the traditional routes that followed seasonally available food.

For Kauai’s honeycreepers and other native birds, recent research has identified a suite of approaches to stem their losses, including the introduction of genetically modified mosquitoes (a subject of some debate), preserving habitat and reforestation, predator control, and translocations.

But in the end, the captive-bred honeycreepers will need to learn the songs that will allow them to successfully repopulate their territories. “When we lose these songs, we’re losing part of that what makes up the Hawaiian forest,” says Paxton.