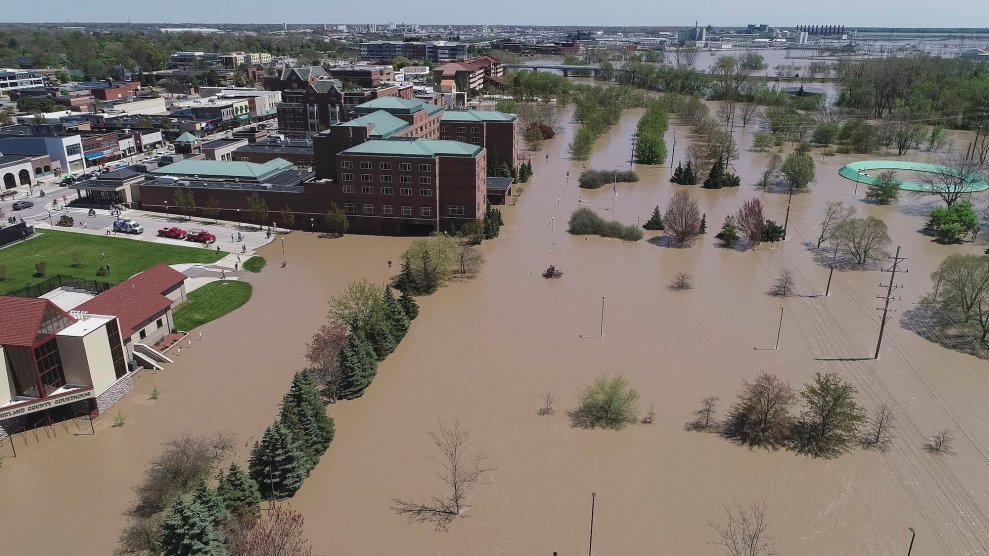 Rivers swollen from days of record-breaking rain topped two dams in Michigan’s Midland County this week, flooding neighborhoods with enough brown, muddy water to fill an Olympic-size swimming pool every two seconds. The flooding sent 10,000 residents who had sheltered in place from the coronavirus pandemic scrambling for higher ground.

Parts of the county 140 miles northwest of Detroit are facing 9 feet of flooding as nearly 5 inches of rain fell over 36 hours, the kind of deluge that takes place only once every 25 to 50 years, meteorologist Paul Gross said. The National Weather Service called the disaster “extremely dangerous” and urged drivers who encounter inundated roads to “turn around, don’t drown.”

By Wednesday, fears mounted that the deluge could infiltrate a Dow chemical plant and endanger a nuclear research reactor. The company confirmed that floodwaters were “commingling with on-site containment ponds.”

“This is unlike anything we’ve seen in Midland County,” Gov. Gretchen Whitmer said at a press conference late Tuesday. “If you have a family member or loved one who lives in another part of the state, go there now.”

“If you have a family member or loved one who lives in another part of the state, go there now.”

The flooding marked only the latest immediate environmental threat amid the pandemic, which has a global death toll of almost 319,000, with nearly 90,000 lives lost in the United States.

In India and Bangladesh, millions braced for Cyclone Amphan, which meteorologists described as the most powerful storm on record to hit the Bay of Bengal.

The southeastern United States, meanwhile, faced Tropical Storm Arthur, the eighth storm this decade to form before June 1, the historic start of hurricane season. Scientists say this is a symptom of warming oceans and a preview of what’s to come as temperatures increase globally.

In the South Pacific, the island nations of Fiji, Tonga and Vanuatu are struggling to recover after the powerful Cyclone Harold destroyed homes in April and the pandemic hampered rebuilding efforts.

The storms were hardly the only global warming-linked events to stir panic as public health officials struggled to contain the virus and prepare for another wave of infections.

Last week, an unusual heat wave settled over the Arctic, elevating temperatures to the highest levels for this time of year since record keeping began in 1958. That could jump-start Greenland’s melt season by two weeks, according to two reports in the Washington Post. One climate scientist in Denmark called the warming “quite extraordinary.”

Extreme droughts parched parts of Northern California, Oregon, South Texas, some Great Plains states and the Northern Mariana Island, a US territory in the Pacific, as of last week, according to the University of Nebraska-Lincoln national drought tracker.

In Siberia, where flames charred the world’s largest forest for months last summer, the hottest April on record once again reduced the northern Russian region to a tinderbox.

In Canada, images of a wildfire spreading quickly across farmland showed a horizon glowing orange with flames and black with smoke.

Wildfires torched parts of the United States, too. In the Florida Panhandle, several fires forced hundreds to evacuate earlier this month. In Southern Utah, a fire sparked by a vehicle and spread by high winds forced the evacuation of nearly two dozen homes.

It’s difficult to establish causal relationships between climate change and individual storms, heat waves and fires. But a study published Monday by researchers at the National Oceanic and Atmospheric Administration and the University of Wisconsin at Madison found that planetary warming over the last 40 years increased the likelihood of tropical cyclones becoming major hurricanes by 8 percent per decade.

NOAA’s annual Arctic report card, meanwhile, confirmed that the northern polar region is warming year after year roughly twice as fast as the rest of the world. And a growing body of research shows that fires are likely to be worse and more frequent as the planet heats up and governments fail to curb homebuilding near at-risk woodlands.

In 2018, the Federal Energy Regulatory Commission revoked the license of the Edenville Dam, one of the two structures that failed Tuesday night. FERC cited numerous violations and concerns that the dam could not withstand flooding, The Detroit News reported. The commission first pressed the dam’s owner about inadequate spillways in 1999 and renewed its calls for upgrades in 2004 and 2017.

In January, the local government in Midland and a neighboring county stepped in to buy Edenville and three other dams. But upgrades weren’t due to be completed for another three years.

Despite earmarking money for water infrastructure, none of the $3 trillion allotted in the economic stimulus bill House Democrats passed last week would go toward fortifying facilities vulnerable to extreme weather resulting from climate change.

Abdul El-Sayed, a progressive political commentator and 2018 gubernatorial contender in Michigan, said the flood showed the effects of “a broken politics of austerity … hitting us all at the same time right now.”

“It’s catastrophe upon catastrophe,” El-Sayed said by phone. “We needed infrastructure investment a long time ago.” —