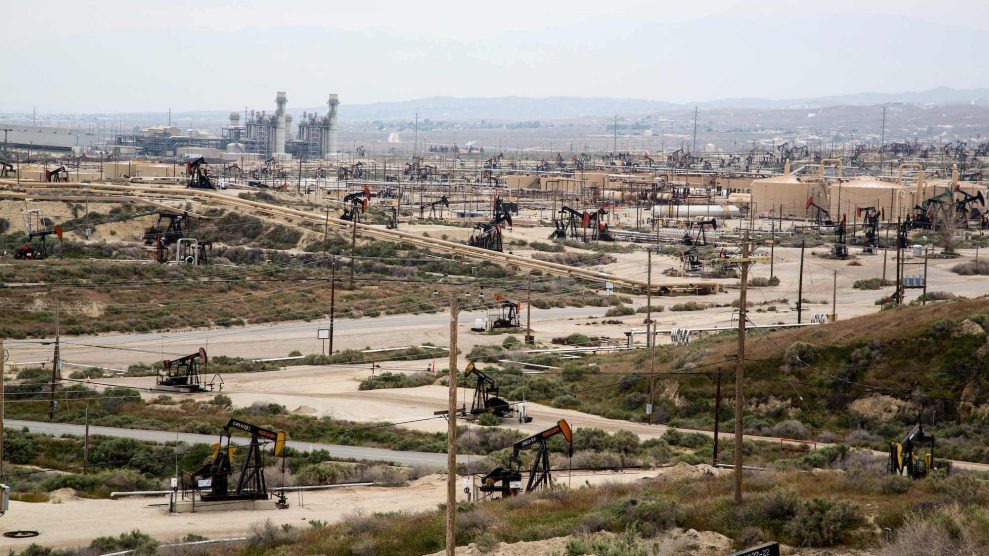 The oil and gas wells that cover Kern River Oil Field in Bakersfield, CA, are on public land leased by the federal Bureau of Land Management.Bob Wick/Zuma

In April, oil prices on the stock market dipped below zero and into negatives for the first time in history. In effect, companies were paying investors to take oil off their hands. The coronavirus pandemic had caused an unprecedented plunge in global demand. The market was saturated; storage facilities filled up across the world. News reports from Singapore described dozens of oil tankers sitting off the coast, filled with petroleum that no one would buy. And the low prices have endured, causing the largest ever-recorded decline in US oil and gas rig counts. Some companies have gone bankrupt, with more likely to follow, and many others have laid off workers and scaled back operations.

When it comes to addressing this oil supply excess, the federal government has few tools at its disposal. In some of the nation’s top oil-producing regions, including West Texas and North Dakota, much of the drilling takes place on private land. In the Western US, however, the federal Bureau of Land Management oversees about 96,000 oil and gas wells on more than 24,000 leases, according to 2018 statistics. Today, even Texas and Oklahoma—states that tend to favor industry, not regulation—have considered measures to limit drilling. But the federal government has taken the opposite approach.

The new policies instruct state offices to let companies apply for lease suspensions and avoid royalty payments, which are the legally mandated taxes on the revenue from resources drilled or mined on public lands. Several BLM state offices confirmed to High Country News that they are carrying out these policies.

These new directives are not outliers. Despite the pandemic, the BLM appears to be encouraging public-lands drilling, rather than pressing operators to shut in wells and not produce oil. In the past few months, the BLM held lease sales in Colorado, Montana, Nevada and Wyoming. A September auction could make more than 100,000 acres of public land available for drilling just outside Canyonlands and Arches national parks in Utah. No such aid has been offered to renewable energy industries, which have also suffered in the downturn. Instead, the Interior Department hit solar and wind projects on federal land with large retroactive rent bills in mid-May, Reuters reported.

“It looks like an effort to exploit COVID-19 to give away public resources in ways that are ultimately quite destructive.”

Taken as a whole, these drilling incentives will not do much to help the oversaturated oil market, said Mark Squillace, professor of natural resource law at University of Colorado Law School. But since federal oil and gas leases last 10 years—and companies often get them extended—operators can grab cheap leases now and sit on them until oil prices rebound, while the lease suspensions and royalty rate reduction provide short term relief on existing wells. The BLM is offering lease sales at the exactly wrong time, selling valuable oil and gas properties during a down market, Squillace said. That, combined with the royalty reduction, means lower financial return on federal oil for energy-dependent Western states. “It looks like an effort to exploit COVID-19 to give away public resources in ways that are ultimately quite destructive,” he said.

A BLM employee who requested anonymity for fear of retaliation, told High Country News that the new guidance was not only unnecessary, it was created in a way that violated agency procedures.

Guidance documents of this sort often go through something called the “Instructional Memorandum” process, which, according to the agency website, exists for “new policy or procedures that must reach BLM employees quickly, interpret existing policies or provide one-time instructions.” The process includes reviews from agency experts—lawyers, engineers and regulatory officials—who are consulted to make sure the documents track with federal law and agency regulations. According to the employee, this process was only partially followed for the lease suspension guidance and was skipped altogether for the royalty tax policy.

“The guidance was written at the highest levels of the BLM Washington Office (or DOI) without consultation from the usual BLM experts,” the employee wrote to High Country News. “The guidance was not reviewed internally by BLM personnel who would be implementing it and was definitely not checked to make sure it conforms to regulation. This is highly unusual.”

An internal memo drafted by agency lawyers and obtained by High Country News, was sent to acting BLM Deputy Assistant Director Mitch Leverette on April 16. The document provided legal backing for the lease suspensions, stating that the pandemic justifies the suspension of drilling operations or production under the lease. “Operators are shutting in producing wells because they cannot travel to well sites or work together at close quarters due to the public health risks and government constraints associated with the coronavirus pandemic or that personnel or service contractors are not available,” the memo read.

But no equivalent memo was produced for the royalty rate relief or shared with agency staff, according to the BLM employee. In the document emailed to state directors, the national BLM directs state offices to let oil and gas operators set their own royalty rates, suggesting 0.5 percent rather than the standard rate of 12.5 percent. Federal royalty rates are calculated based on the price of the commodity, meaning that, since oil prices are low, active drillers on public land are already getting a reduction.

Squillace, a former Interior Department lawyer, agrees that the process was abnormal. He added that significant changes of this sort ought to be treated as rules that likely warrant environmental assessments, as well as public notice and comment periods. But the merits of these particular proposals concern him even more than the unusual process, especially when it comes to the royalty rate relief.

Now, companies can request a lower royalty rate if they can demonstrate economic hardship due to the COVID-19 pandemic. For most operators, this will not be hard to do. Companies must also show that their leases would become “economic” once the standard royalty rate is reduced. Operators have already submitted hundreds of applications for lease suspensions and royalty rate relief, with many of the relief rate requests at either 0.5 percent or 0.0 percent, according to agency and industry sources.

Both the lease suspensions and the royalty relief period are set at 60 days, according to the BLM website. Yet both policies include open-ended language allowing the agency to extend lease suspensions and rate reductions as long as the pandemic endures, without public notice and without the operator having to reapply every 60 days. State BLM officials confirmed to High Country News that some companies are receiving six-month extended periods of royalty relief and lease suspensions. “The lease suspensions can be extended beyond 60 days if COVID-19 conditions exist,” wrote Chris Rose, BLM Nevada spokesperson. “In the case of the royalty rate reductions, the BLM action referred to in the guidance allows us to extend the rate relief without the producer having to file an application every 60 days. The time frames are also subject to modification if conditions improve.” The national BLM office did not respond to HCN‘s request for comment on the new guidance.

“There is too much oil worldwide.”

Industry groups say that these relief policies are not overly helpful. The requirement that companies re-apply for suspensions and relief every two months is an arduous one, said Kathleen Sgamma president of the Western Energy Alliance, a trade group that represents hundreds of independent oil and gas companies in the intermountain West. Sgamma wrote in an email that a comprehensive “system-wide policy” of aid would better serve struggling operators. She added that the conditions for royalty reductions are misguided, because at current prices, few wells are profitable even at a reduced rate. Low demand and an over-supplied global market are to blame, and that will not change anytime soon.

“There is too much oil worldwide. Companies need to shut in production and suspend operations because there is often simply no physical place to put all the oil,” Sgamma wrote.

Half of all oil and gas royalties go to the states where the resource was produced, so this decline matters a great deal for states like Wyoming and New Mexico. In fiscal year 2019, New Mexico received $1.1 billion in federal mineral royalties, according to Interior Department data. Wyoming industry produced $640 million in the same time. These royalties fund state universities, public school systems and hospitals. A record-setting lease sale on the New Mexico side of the Permian Basin, for example, helped fund a $450 million increase in public education spending for fiscal year 2020.

That was before the coronavirus. Oil and gas revenues make up 40 percent of New Mexico’s current budget, which was based on oil prices twice what they are now. Now, due to COVID-19, the state faces a potential $2 billion budget shortfall for the fiscal year that begins this summer, the Albuquerque Journal reported.

Royalty payments exist because the public lands and the resources they contain are held in common by the American public. So when a company profits from these resources, Squillace pointed out, it stands to reason that the public should benefit, too—especially citizens in the state where the extraction took place. Oil and gas companies are struggling. But so are Western states, and the new BLM policies allow companies to drill for public resources while generating scant public revenue. “That amounts to effectively giving away the public’s oil,” Squillace said.