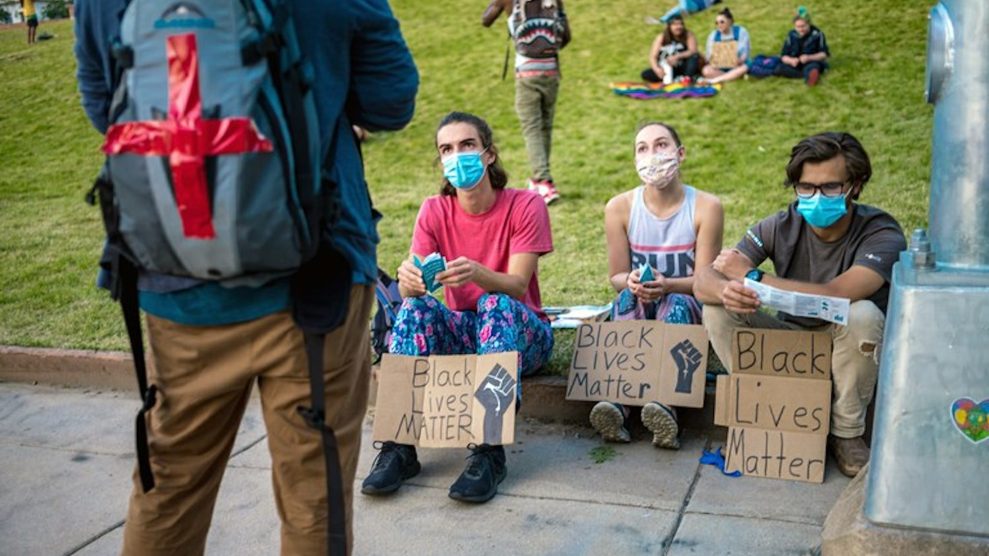 As citizens across the country fill the streets to protest police killings of Black people, the violent response from law enforcement has added urgency to a national conversation about police brutality. Pressure is mounting to reform or abolish police departments. City officials in Western urban centers like Los Angeles are reducing police budgets—LA’s currently totals $1.8 billion—and reinvesting in underfunded social initiatives. The Minneapolis City Council pledged in June to disband its police department entirely. As cities look for what’s next, there is already a proven system of de-escalation for the high volume of mental health calls that police respond to, which often end in violence.

Mobile, community-based crisis programs employ first responders that are not police to address disturbances where crimes are not being committed. One of the nation’s longest-running examples is CAHOOTS—Crisis Assistance Helping Out On The Streets—in Eugene, Oregon. CAHOOTS has inspired similar programs in other cities in the region, including the Denver Alliance for Street Health Response, Mobile Assistance Community Responders of Oakland and Portland Street Response in Oregon.

Such programs take police out of the equation when someone is going through a mental health crisis, struggling with substance abuse, or experiencing homelessness. When police show up, situations can escalate, and the use of force can be disproportionate, especially towards Black people; a 2016 study estimated that 20 percent to 50 percent of fatal encounters with law enforcement involved someone with a mental illness. Advocates say the CAHOOTS model shows those encounters aren’t inevitable: Less than one percent of the calls that CAHOOTS responds to need police assistance. The CAHOOTS system relies on trauma-informed de-escalation and harm reduction, which reduces calls to police, averts harmful arrest-release-repeat cycles, and prevents violent police encounters.

The White Bird Clinic in Eugene started CAHOOTS 31 years ago as an alternative for people who felt alienated or disenfranchised from systems that had failed them, CAHOOTS Operations Coordinator Tim Black said in an interview. “We’re there to listen, we’re there to empathize, and we’re there to really reflect on what they’re going through,” and to discuss ways to access resources to help them. CAHOOTS — a free, 24/7 community service — is funded by Eugene and neighboring Springfield at a cost of around $2 million, equal to just over 2% of their police departments’ annual budgets. The program is currently fundraising to expand and make up for COVID-19-related budget cuts.

Under the model, instead of police, a medic and a mental health worker are dispatched for calls such as welfare checks or potential overdoses. In 2017, such teams answered 17 percent of the Eugene Police Department’s overall call volume. This has saved the city, on average, $8.5 million each year from 2014-2017, according to the White Bird Clinic.

“The patient that we’re serving is the expert in their situation. They know that we’re a voluntary resource and that we’re not going to take their rights away just because we’ve shown up on scene.”

Though CAHOOTS uses the police department’s central dispatch, it is distinct from the department. Employees do not carry guns or wear uniforms; instead, they wear casual hoodies and drive vans with a dove painted on the side. CAHOOTS’ methods are designed to prevent escalation, Black said. “If an officer enters that situation with power, with authority, with that uniform and a command presence, that situation is really likely to escalate.”

It’s a false assumption that people experiencing a mental health crisis will respond violently, Black said, and a police response is often unnecessary. CAHOOTS fielded over 24,000 calls last year; less than 1 percent of them needed assistance from police, and no one has ever been seriously injured. “That type of mentality really contributes to the othering that has permitted oppression and marginalization to persist,” Black said. “By and large, folks who are unhoused, who are experiencing behavioral health issues, are much more likely to be the victims of violence than the perpetrators.”

CAHOOTS differs from other mental health partnerships with the police in important ways: Staff employ “unconditional positive regard,” a phrase from psychology that means complete support and acceptance for the people they encounter, and the organization is run as a “consensus collective,” rather than a hierarchy. Every employee’s voice carries equal weight.

Each crisis worker completes 500 hours of training in areas including medical care, conflict resolution and crisis counseling. Around 60 percent of CAHOOTS’ patients are homeless, and about 30 percent have severe or persistent mental illness. “The patient that we’re serving is the expert in their situation,” Black said. “They know that we’re a voluntary resource and that we’re not going to take their rights away just because we’ve shown up on scene.”

Dorothy Siemens, an artist who grew up in Eugene and still lives there, said that she, her family and her friends all call CAHOOTS, rather than the police, when they see someone in distress. The option makes her feel like a more responsible community member. When Siemens managed a downtown cafe, she used the service often. “I really don’t have the tools, and I think the police in our community also don’t have the tools” for people in crisis, she said. “There really shouldn’t be one group of people who is expected to cover all of those bases, especially a group a people who are weaponized and militarized. … Their training shows them ‘that’s something I have to respond to with force.’ “

Increasingly, community organizers are reaching out to CAHOOTS, hoping to develop similar programs. Since 2013, the city of Portland, Oregon, just a couple hours north of Eugene, has seen a 60 percent increase of “unwanted person” calls to 911, according to a Willamette Week analysis of Portland Police Bureau data. In 2017, an Oregonian analysis found that 52 percent of arrests involved homeless individuals, even though they comprise less than 3 percent of Portland’s population.

In 2019, Portland City Commissioner Jo Ann Hardesty and Street Roots, a homeless advocacy publication, introduced Portland Street Response, a police alternative based on the CAHOOTS model. The pilot program, which was officially approved and funded by the city last November, focused on a southeast Portland neighborhood where 911 calls were on the rise. The program is now on hold because of the coronavirus, but Hardesty hopes to get on the ground soon. As the city considers cutting its police budget, Hardesty is pushing for $4.8 million to go towards Portland Street Response instead. “We are long overdue for investments in police alternatives, including Portland Street Response,” Hardesty, the first Black woman elected to Portland’s city council, said in a statement to High Country News. “There’s no doubt we need to reimagine what it looks like to get the right responder to the right situation at the right time.”

Nationwide protests have spurred renewed urgency for programs like these, which show a stark contrast to the typical police response. This month, the Coalition for Police Accountability in Oakland presented a final report to the city council to begin its own pilot program, MACRO, this summer. In Denver, in May, Vinnie Cervantes worked as a medic with the Denver Alliance for Street Health Response, which he also directs. It’s part of a mutual aid nexus that emerged during protests in the city over the police killing of George Floyd in Minneapolis. Cervantes and others treated protesters who were left bleeding and bruised after police fired off tear gas, rubber bullets and flash-bangs and pummeled them with batons. To Cervantes and others, it was yet another example of how quickly police resort to excessive force. “Our community stepped up to collaborate and create a network of support to solve a larger public safety crisis,” Cervantes said. “That’s something we can take beyond protest.”

“There’s no doubt we need to reimagine what it looks like to get the right responder to the right situation at the right time.”

Policing and jails account for 30 percent of Denver’s overall budget. The repurposing of those funds would be a huge opportunity for collective efforts like Denver Alliance, which resembles the CAHOOTS model. But no single model will work for every city, said Cervantes. Each program needs to be adaptive and reflect its community; Eugene, after all, is much smaller and has a whiter population than Denver, Oakland or Portland. “It’s really important that it is community-based, by people that look like us and that have our shared experience,” said Cervantes, who is Latino. Otherwise, the program will only replicate the same systemic problems.

In June, Cervantes’ organization helped start a pilot program in partnership with the city of Denver, called Support Team Assisted Response. Cervantes hopes to develop a full-fledged program by 2021. But, for now, on the streets, “we’re literally seeing our own proof of concept of how we can take ownership of crisis ourselves, and have solutions,” he said. “We don’t have to view everyone as a threat.”