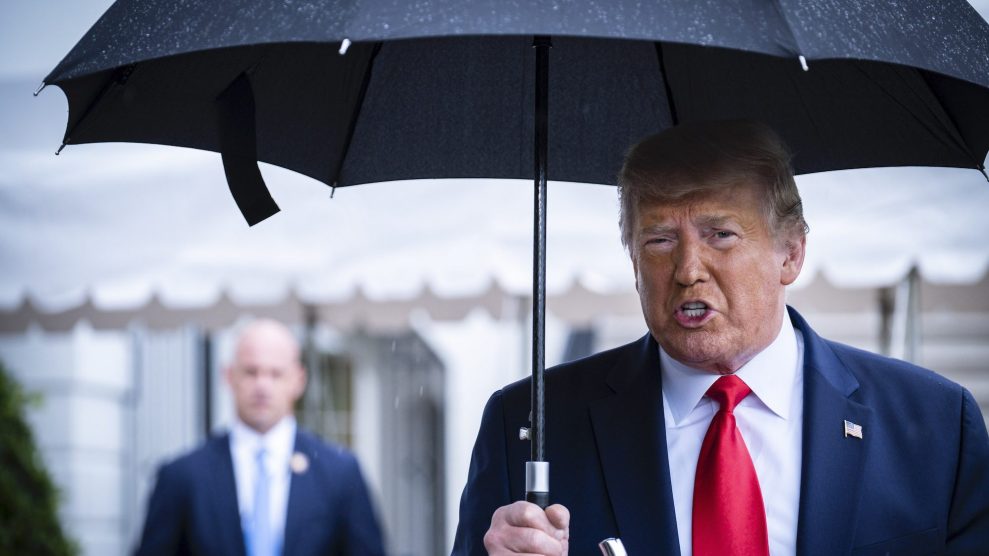 Amid a national uprising for racial justice and a deadly pandemic that’s disproportionately impacting Black, Latinx and Native communities, President Donald Trump is promising lengthy prison sentences for anyone who destroys or dismantles a monument to a slave-owning president or leader of the Confederacy.

At a Saturday campaign rally in Tulsa, Oklahoma, Trump came to the defense of Confederate leaders like Jefferson Davis, Robert E. Lee and Stonewall Jackson, whose statues have been defaced and removed in recent weeks. “The unhinged left-wing mob is trying to vandalize our history, desecrate our monuments―our beautiful monuments,” he said, adding that “they want to demolish our heritage.”

And after protesters attempted to topple a statue of slave-owning Trump hero President Andrew Jackson near the White House on Monday, Trump announced on Twitter that he had “authorized the Federal Government to arrest anyone who vandalizes or destroys any monument, statue or other such Federal property in the US with up to 10 years in prison.” Effective immediately, he added, but “may also be used retroactively for destruction or vandalism already caused.”

But it is Trump who has done the most damage to national monuments, dismantling or desecrating four federally protected land and water sites with significant cultural, archeological and natural resources.

Those rollbacks include carving more than 2 million acres from a pair of protected national monuments in Utah—Bears Ears and Grand Staircase-Escalante―in December 2017. The boundary of Bears Ears, a 1.35 million-acre landscape that several tribes consider sacred, was cut by 85 percent. Nearby 1.87 million-acre Grand Staircase-Escalante, the largest land national monument in the country and rich in both archeological and paleontological resources, was cut roughly in half. This month, Trump signed a proclamation to greenlight commercial fishing within Northeast Canyons and Seamounts Marine National Monument, a vast protected site off the East Coast―a move that goes against the very purpose of designating a marine sanctuary.

The administration has also bulldozed and blown up Indigenous cultural and burial sites within Organ Pipe Cactus National Monument, a UNESCO biosphere reserve that is also home to endangered species, to make way for Trump’s wall along the US-Mexico border. Ned Norris Jr., the chairman of the Tohono O’odham Nation, has compared construction of the wall on sacred burial sites to desecrating Arlington National Cemetery.

The Interior Department has floated additional cuts at several other protected national monuments.

In the case of Bears Ears, five Native American tribes had come together to petition for the creation of the monument to honor and safeguard their cultural heritage. The Obama administration protected the site, named after a pair of buttes, which is home to thousands of Native American archeological and cultural sites.

Trump railed against “far-away bureaucrats” in Washington, DC, and boasted that he was ending “another egregious abuse of federal power.”

When Trump traveled to Salt Lake City to sign the proclamation gutting Bears Ears, he said nothing about the tribes’ years long fight to secure monument status for the area. Instead, he railed against “far-away bureaucrats” in Washington, DC, and boasted that he was ending “another egregious abuse of federal power” and opening up protected areas to “tremendously positive things,” namely potential energy and mineral development.

The rollback was widely viewed as an illegal assault on tribes, tribal sovereignty and tribal culture. The Bears Ears Inter-Tribal Coalition—a group of the five tribes with ties to the region—called the move “a slap in the face to the members of our Tribes and an affront to Indian people all across the country.” The coalition is among several groups now suing the administration in an effort to restore the monument’s original boundaries.

Trump and his team barely engaged with tribal leaders on the issue. Then-Interior Secretary Ryan Zinke, who also has a history of defending Confederate monuments, even scolded and shook his finger in the face of a Navajo woman when asked why he hadn’t spent more time talking with tribal leaders as part of his review of the site.

But when anti-racist protesters target monuments honoring US leaders with racist and genocidal legacies, Trump becomes a forceful defender of American history. The president “will not allow rioters to dismantle our cultural heritage,” the White House wrote in a Twitter post that included a video of Trump blasting the protesters who targeted the statue of President Andrew Jackson. Along with owning more than 100 slaves, Jackson oversaw the deadly Trail of Tears that forced tens of thousands of Native Americans off their ancestral lands.

President @realDonaldTrump will not allow rioters to dismantle our cultural heritage. pic.twitter.com/tNVuDTb1SD

“The president showed no concern for our ‘heritage’ when his Interior Department was decimating Bears Ears, land that is sacred to Native history and culture,” Sen. Tom Udall (D-N.M.) said via email. “President Trump’s decision to sell off lands that are treasured by Tribes for development reveals that the president is not concerned with ‘heritage’ but rather dividing Americans in ways he thinks will benefit him politically.”

Trump’s dismantling of Bears Ears and quick defense of symbols upholding white supremacy shines a clear light on how his patriotism and perception of cultural heritage serves one demographic over all others, said Alastair Bitsoi, a member of the Navajo Nation and spokesman for Utah Diné Bikéyah, a nonprofit organization working to safeguard Bears Ears and other ancestral lands. Bitsoi noted that there are more than 100,000 cultural and archaeological sites within the original monument boundary―ancient rock art panels, granaries, burials and well-preserved cliff dwellings―that were significant to Indigenous communities long before people like Andrew Jackson came along. The Trump rollback cut an estimated 74 percent of the known archeological sites out of the monument.

“If he thinks that people who are destroying national monuments across America should go to jail and he is not restoring Bears Ears monument, then he should go to jail himself,” Bitsoi said. “I’m just following his logic.”

In response to a request for comment, the White House sent an off-the-record statement. Officials did not include anything HuffPost could actually use in this article.

Trump said this week that he is readying an executive order to better protect national statues and monuments. NBC News reported Wednesday that Trump instructed Interior Secretary David Bernhardt to re-erect a statue of Gen. Albert Pike, the only Confederate monument in Washington, D.C., after protesters tore it down and set it on fire on Juneteenth, the day commemorating Black emancipation from slavery.

“We will protect these monuments and we will do it with dispatch and severity,” Bernhardt said in a Tuesday night interview with Fox News. “Every time a monument is destroyed or damaged,” he added, “that’s an injury against all of us.”

The administrative effort and upcoming executive order are unlikely to benefit the Indigenous cultural and spiritual sites that have lost protections and been desecrated during Trump’s tenure.

“The Trump Administration fails to acknowledge the incredible cultural history of indigenous people on this continent,” Rep. Deb Haaland (D-N.M.), one of the first two Native American women to serve in Congress, wrote on Twitter. “The President’s defense of white supremacy is incredibly insulting and his actions reflect his lack of respect for Tribes.”