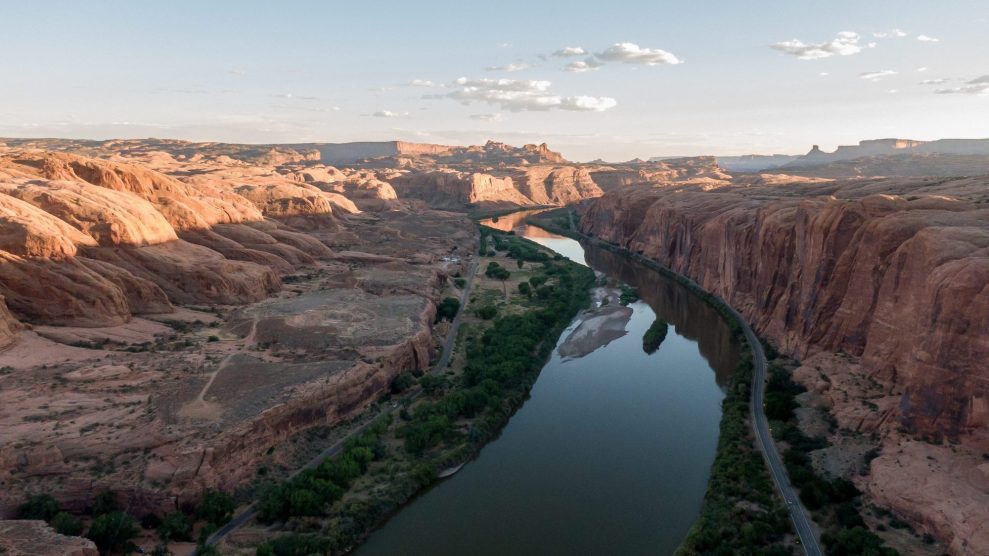 The sun sets on the Colorado River outside Arches National Park in Moab, Utah.Justin L. Stewart/Zuma

On July 22, Congress passed the biggest public-lands spending bill in half a century. The bipartisan bill, called the Great American Outdoors Act, puts nearly $10 billion toward repairing public-lands infrastructure, such as outdated buildings and dysfunctional water systems in national parks. It also guarantees that Congress will spend the $900 million it collects each year through the Land and Water Conservation Fund, or LWCF. The legislation boosts access to nature, funds city parks and will pay for a significant chunk of the massive maintenance backlog on public lands in the US.

But it all comes at a cost to the climate. To pay the bill’s hefty price tag, Congress is tapping revenue from the fossil fuel industry. Though the new law has been cheered by conservation groups, it fails to address either the modern crisis of climate change or the impacts of the West’s growing recreation and tourism economy on wildlife. In this way, the Outdoors Act exposes the gaps between conservation and climate activism, while providing a grim reminder of the complicated entanglements of energy, economics, climate—and now, a pandemic.

The biggest windfall from the Great American Outdoors Act—up to $6.5 billion over five years—will go to the National Park Service. National parks are the public lands’ top tourist attraction, receiving more than 327 million visits in 2019 alone, but dwindling annual funding has left the agency with about $12 billion in overdue projects. These projects include everything from a $100 million pipeline to bring water to visitors and communities on the South Rim of the Grand Canyon to routine campground and trail maintenance.

The money will also benefit gateway communities in the West. A National Park Service analysis projects that the new legislation will create an additional 100,000 jobs over the next five years, on top of the 340,500 jobs the parks already support in nearby towns. For many places reeling from the pandemic’s economic toll on tourism, such as Whitefish, Montana, a gateway community to Glacier National Park, the bill will be a shot in the arm. Glacier has more than $100 million in overdue projects, and the infusion of money will bring new jobs after a dismal tourist season.

The impacts also stretch beyond immediate job gains because of the way access to recreation drives economic growth in the rural West. Communities that have more protected lands nearby generally grow faster and have higher income levels, said Mark Haggerty, who researches rural economies for Headwaters Economics, a nonprofit think tank in Montana. That growth is driven by both tourism and new arrivals looking to live closer to the outdoors. “Residents and businesses want to be close to public lands,” Haggerty said. “Recreational amenities can attract high-wage jobs.”

Federal public lands aren’t the only places that will benefit from the bill. Since 1964, the Land and Water Conservation Fund has paid for a variety of outdoor projects around the country with taxes and royalty payments from oil and gas drilling in the Gulf of Mexico. The Outdoors Act obliges the LCWF to spend the entire $900 million it collects each year, something that’s happened only twice in the past 50-plus years.

With full LWCF funding, more money will be flowing from federal coffers to local projects. In urban areas, like the South Park neighborhood in Seattle, the fund recently paid for new playground equipment and a spray zone at a local park. Out in the country, the program typically finances projects to protect habitat and improve public access, as at Tenderfoot Creek in Montana, where the fund paid for more than 8,000 acres to be transferred from private to public ownership by 2015.

But rising recreation comes at a cost for critters. Recent studies have shown that it poses a serious threat to the very wildlife that draws people to backcountry trails. In Vail, Colorado, a town built around access to nature and outdoor sports, local elk herds have been in precipitous decline, a phenomenon biologists attribute to more people tromping through the woods. In Idaho, snowmobilers and federal land managers are battling over whether to reroute the machines to save wolverines. And a recent review by the California Department of Fish and Game found that vulnerable species can be pushed to extinction by expanding human activity on public lands.

Supporters of the Outdoors Act see securing LWCF funding as vital for conservation. “It’s the best and virtually only tool for protecting land for wildlife,” said Tracy Stone-Manning, the leader of the National Wildlife Federation’s public-lands program. But that doesn’t mean that recreation’s impacts are being ignored, Stone-Manning said. “We need to protect open spaces, then we need to get smart about managing the impact of recreation on wildlife.”

Even as many rural Western communities grapple with an economic future tied to recreation, the Outdoors Act underlines the enduring legacy of American dependence on fossil fuels. The $9.5 billion set aside for the public-lands maintenance backlog will come from revenue paid by private companies that produce energy—from both fossil and renewable sources—on federal lands and waters. At first glance, this appears to be a shift away from the LWCF’s funding model, which depends solely on offshore oil and gas income. But for now at least, most of the money will still come from fossil fuel production: In 2019, for example, federal offshore wind energy generated just over $410 million in revenue, a drop in the bucket compared to the nearly $9 billion from fossil fuels on federal land and waters.

“You have to give kudos to the Republicans for shifting the conversation so far to the right that the premise has been agreed to that we should fund conservation with the destruction of the earth.”

Reliance on oil production to pay for parks ignores the need to reduce greenhouse gas emissions to preserve a livable climate. “You have to give kudos to the Republicans for shifting the conversation so far to the right that the premise has been agreed to that we should fund conservation with the destruction of the earth,” said Brett Hartl, government affairs director for the Center for Biological Diversity.

Because they depend on the oil and gas industry, the LWCF and park maintenance are vulnerable should the US transition away from fossil fuels, or if production drops for another reason, like the current pandemic. (Compared to the same time period in 2019, onshore oil and gas royalty receipts dropped 53 percent and offshore royalties plummeted by 84 percent in April 2020.) The arrangement also provides rhetorical cover for energy executives. “These programs underscore the need to continue safe development of domestic offshore energy reserves,” said American Petroleum Institute Vice President Lem Smith in a press release cheering the Senate passage of the bill. “Policies that end or limit production in federal waters would put these essential conservation funds in doubt.”

Even as Congress relies on the fossil fuel industry to pay for conservation projects, legislative frameworks that recognize the climate and extinction crises are intertwined are emerging. Recently proposed initiatives like the “roadmap for climate action” put forward by the House Select Committee on the Climate Crisis and the 30 by 30 resolution, a Senate push to protect 30 percent of US land and oceans by 2030, tie climate action to land and wildlife conservation. And proposals for different funding models for conservation, including a “backpack tax” on outdoor apparel and equipment that would shift some conservation costs to recreationists, have been proposed for decades.

All of these plans are a far cry from the bill currently being celebrated as a major win for conservation and public lands. “We need to be sure we’re not pretending our work is done; this money is not a panacea for reaching conservation goals,” said Kate Kelly, the director of public lands for the Center for American Progress and an Obama-era Interior Department senior adviser, who supports the bill. “The funding model needs to be re-examined and reimagined.” Moving forward, addressing climate change and biodiversity loss requires acknowledging that the crises are inextricable. “The climate and conservation communities haven’t always coordinated, and that needs to change,” Kelly said. “They’re two sides of the same coin.”