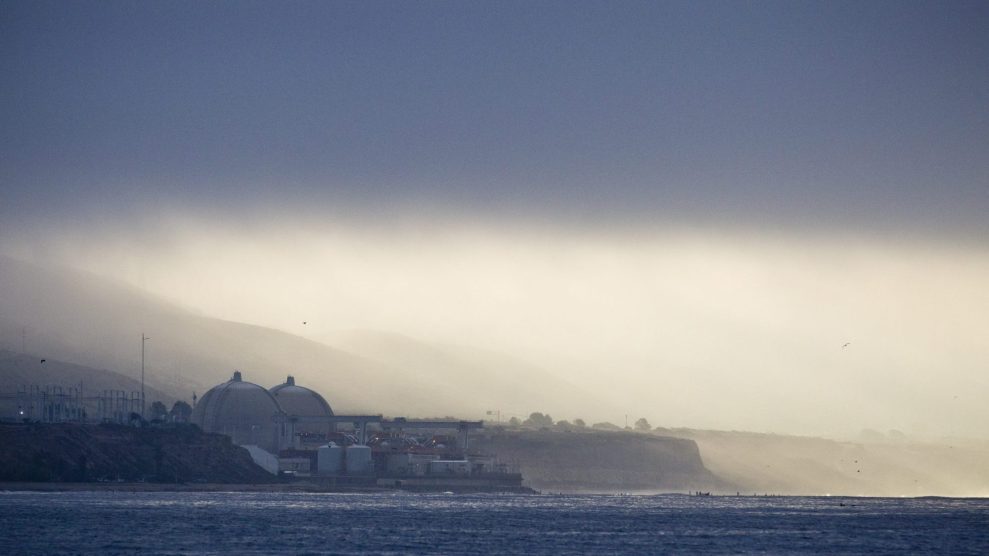 San Onofre nuclear power station—which has been in the process of decommissioning since 2013—in the early morning fog in San Clemente, California.Jason Murray/Zuma

The basic idea behind all nuclear power plants is the same: Convert the heat created by nuclear fission into electricity. There are several ways to do this, but in each case it involves a delicate balancing act between safety and efficiency. A nuclear reactor works best when the core is really hot, but if it gets too hot it will cause a meltdown and the environment will get poisoned and people may die and it will take billions of dollars to clean up the mess.

The last time this happened was less than a decade ago, when a massive earthquake followed by a series of tsunamis caused a meltdown at the Fukushima Daiichi power plant in Japan. But a new generation of reactors coming online in the next few years aims to make these kinds of disasters a thing of the past. Not only will these reactors be smaller and more efficient than current nuclear power plants, but their designers claim they’ll be virtually meltdown-proof. Their secret? Millions of submillimeter-size grains of uranium individually wrapped in protective shells. It’s called triso fuel, and it’s like a radioactive gobstopper.

Triso—short for “tristructural isotropic”—fuel is made from a mixture of low enriched uranium and oxygen, and it is surrounded by three alternating layers of graphite and a ceramic called silicon carbide. Each particle is smaller than a poppy seed, but its layered shell can protect the uranium inside from melting under even the most extreme conditions that could occur in a reactor.

Paul Demkowicz is the director of the Advanced Gas Reactor Field Development and Qualification Program at Idaho National Laboratory, and a large part of his job is simulating worst-case scenarios for next-generation nuclear reactors. For the past few years, Demkowicz and his colleagues have been running qualification tests on triso fuel that involve putting them in a reactor and cranking the temperature. Most nuclear reactors today operate well below 1,000 degrees Fahrenheit, and even the next generation high-temperature reactors will top out at about 2,000 degrees. But during the INL tests, Demkowicz demonstrated that triso could withstand reactor temperatures over 3,200 degrees Fahrenheit. Out of 300,000 particles, not a single triso coating failed during the two-week long test.

“In the new reactor designs, it’s basically impossible to exceed these temperatures, because the reactor kind of shuts down as it reaches these high temperatures,” says Demkowicz. “So if you take these reactor designs and combine them with a fuel that can handle the heat, you essentially have an accident-proof reactor.”

“So if you take these reactor designs and combine them with a fuel that can handle the heat, you essentially have an accident-proof reactor.”

In a conventional nuclear reactor, the main line of defense against a meltdown is the fuel control rod, which power plant operators use to control the fission rate in the core. If things get too hot, they push more rods into the core so the fission rate—and temperature—goes down. Every operating nuclear reactor in the world is also ensconced in a massive containment structure designed to prevent radioactive material from escaping if something goes wrong.

But with triso fuel, these safety features are redundant, since each particle is effectively wrapped in a control rod. This opens the door for small reactor designs that wouldn’t have been possible before. “Now you don’t have to go build this large containment vessel that costs hundreds of millions of dollars for a reactor, because the fuel carries its own containment,” says Joel Duling, the president of the Nuclear Operations Group at BWXT, a company that makes triso fuel and nuclear reactors. “So you can have a reactor that fits in a cargo container and still has all the safety features of a traditional commercial reactor.”

Triso fuel has been around since the 1960s, but it was expensive to manufacture and didn’t have enough energy density to meet the needs of the giant light-water reactors found in most of the world’s nuclear power plants. Yet once the Department of Energy started throwing its support behind companies developing small high-temperature reactors in 2015 with the launch of the Gateway for Accelerated Innovation in Nuclear program, it looked like triso fuel’s time had come. There was just one problem: No one was producing it.

America’s nuclear fuel production capacity has been in freefall since the mid-1980s, spurred by declines in uranium price and demand. But in 2003, BWXT partnered with the Department of Energy to make triso fuel for testing and demonstrated that it could produce the fuel at scale should the demand arise. At the time, President George W. Bush was promoting an imminent “nuclear renaissance” in the United States, but the announcement turned out to be premature. The renaissance didn’t start to materialize for another 15 years, after hundreds of millions in federal funding was injected into a wave of nuclear startups. And it wasn’t until last October that BWXT announced that it was restarting its triso production line to supply fuel to the next generation of high-temperature nuclear reactors that will come online in the next few years.

“We see a large demand from a wave of new reactors in the not-too-distant future,” says Duling. “By the late ’20s and early ’30s, triso will take over as the dominant fuel type.”

BWXT is one of just two companies in the US developing triso fuel for commercial production, and it is also supplying it to the US government for use in its experimental 3D-printed nuclear reactor. The other company, Maryland-based X-energy, is a relative newcomer to the nuclear energy business but has been operating a pilot triso production facility at Oak Ridge National Lab since early last year.

Turning raw uranium into triso is a multistep process that begins by treating the uranium—either ore mined from the Earth or down-blended from weapons-grade material—with chemicals to turn it into gel-like beads. These beads, each only a millimeter in diameter and the consistency of a jelly bean, are then put in a furnace that is injected with gases that break down in the oven, depositing thin layers of graphite and silicon carbide around the uranium kernel. The result is a lot of indestructible triso fuel particles that are pressed by the tens of thousands into cylindrical or spherical fuel pellets.

The pellets made by BWXT take a more conventional shape—a small cylinder the size of a bullet—but X-energy is putting its triso fuels into a shiny silver orb the size of a billiard ball. Clay Sell, X-energy’s CEO and a former US deputy secretary of energy, likes to call them “power balls,” and says they’ll be used to fuel the company’s new reactor, the Xe-100.

The Xe-100 is a small pebble-bed reactor that is designed to produce just 75 megawatts of power. (For the sake of comparison, the smallest operating nuclear reactor in the US today produces around 600 megawatts.) Pete Pappano, X-energy’s vice president of fuel production, likens it to a gumball machine. “The power ball goes down through the core, comes out the bottom, and then goes back to the top,” Pappano says. It takes the triso ball about half a year to complete the cycle through the reactor’s guts. It can pass through the core six times before it needs to be replaced.

There are other benefits too. Rather than needing to have miles of open space around a reactor, future plants running on triso fuel could be situated close to their users, Sell says. “It is physically impossible—as in, against the laws of physics—for triso to melt in a reactor,” says Sell. “And when you start with a reactor that can’t melt, your safety case completely changes.” This is part of the reason why the Department of Defense inked a deal with both X-energy and BWXT this year to develop a small mobile nuclear reactor for remote military bases and why NASA is considering triso fuel for nuclear powered spacecraft.

Like every other commercial advanced nuclear reactor, the Xe-100 is currently under review by the Nuclear Regulatory Council. It’s a lengthy and arduous process, but if the regulators give it their stamp of approval, Pappano says X-energy is prepared to do a full scale demonstration of the reactor before the end of the decade. In the meantime, both X-energy and BWXT are focusing on expanding their triso production facilities so that when the next generation of nuclear reactors arrive, they’ll have the fuel they need to make meltdowns history.