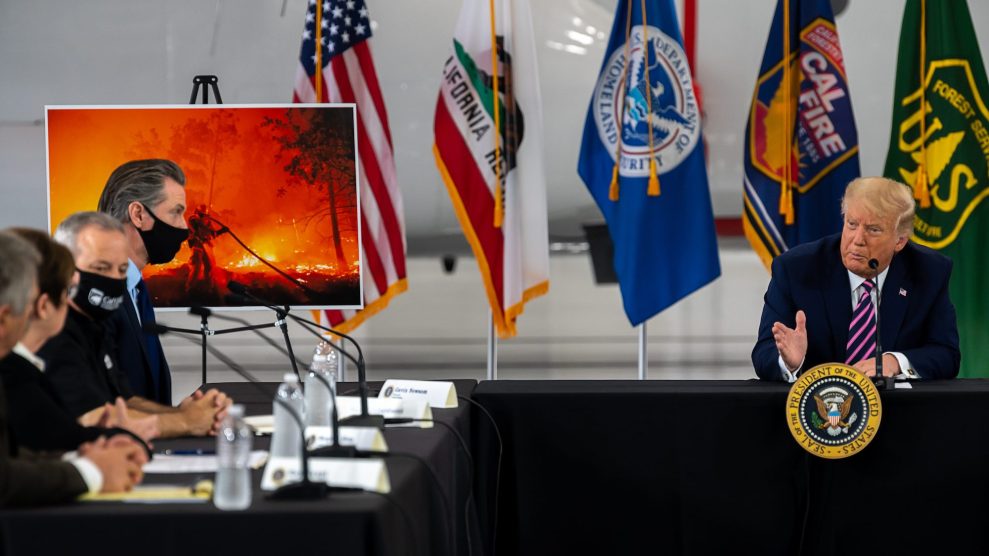 As wildfires blazed across the American West, causing evacuations as far east as Idaho and spewing smoke over the Atlantic coast, President Trump flew to California on Monday to meet with Gov. Gavin Newsom and show support for firefighting efforts. It wasn’t long before climate change denialism surfaced. During a press conference with state officials, California Natural Resources Agency head Wade Crowfoot raised the importance of climate science in wildfire prevention strategy.

Trump was having none of it. “I don’t think science knows,” whether climate change is behind the severe flames seen this wildfire season, he said. Currently, six of the largest 20 fires in state history are burning across California. In Oregon, 40,000 people have had to evacuate from fires there.

Experts who study climate change and wildfires say science, actually, does know, and the spike in wildfire prevalence is directly linked to global climate change. Earlier this week, Zeke Hausfather, a climate scientist at the Oakland-based think tank Breakthrough Institute, told the LA Times, “What we’ve been seeing in California are some of the clearest events where we can say this is climate change—that climate change has clearly made this worse.” During an interview with Mother Jones at the beginning of this year, when wildfires were devastating Australia, climatologist Michael Mann said there has been no historical for wildfires of this frequency and destruction. “[T]hese processes have been in operation for decades and centuries and millennia,” he said. “And yet we have never witnessed the sorts of catastrophic impacts that we’re seeing right now.”

“What we’ve been seeing in California are some of the clearest events where we can say this is climate change—that climate change has clearly made this worse.”

This message has not reached the president. Almost immediately after stepping out of his plane onto the tarmac in Sacramento, where smoke has lowered air quality, Trump revived a debunked theory on wildfires: Climate change isn’t to blame for severe wildfires, but forest mismanagement is—specifically unraked leaves. “When trees fall down after a short period of time, they become very dry—really like a matchstick,” he said, according to the New York Times. “And they can explode. Also leaves. When you have dried leaves on the ground, it’s just fuel for the fires.” The president also noted that an unnamed European leader had told him that European counties “have trees that are far more explosive—explosive in terms of fire” than in California, but that diligent forest management precludes fires.

Experts who point to climate change as a leading cause of recent, devastating wildfire seasons acknowledge that unburnt ground brush can fuel the flames, but that it’s just one piece of a complex problem.

President Trump’s reluctance to accept climate change as a reality has a long history. The Trump administration has overseen massive rollbacks of environmental regulations and deep funding cuts for federal programs like the Environmental Protection Agency, while denying the severity of climate change and supporting the fossil fuel industry.

But his theory on wildfires is uniquely strange. It’s unclear which European leader Trump was referring to, but his understanding of wildfires appears to come from a misunderstood conversation with the Finnish president Sauli Niinistö in 2018 on the subject. After they met in Paris Trump seemed to believe that Finland, “a forest nation,” has avoided wildfires by vigorously raking its forest floors of leaves and brush. “[T]hey spend a lot of time on raking and cleaning and doing things, and they don’t have any problem,” he said at the time. Niinistö seemed to remember the conversation differently. In an interview with a Finnish newspaper, Niinistö said he told Trump that Finland’s wildfire mitigation program relies on “a good surveillance system and network.”

What’s more, Finland isn’t a wildfire free nation. Just this summer, Finland faced unusually large burns. In fact, in 2018, the year Trump’s misconception around wildfires apparently began, almost a dozen large wildfires burned north of the Arctic Circle above Europe. During the string of summer weeks that the wildfires burned, a series of daily temperature records were set worldwide.

In Sacramento, the president stuck to his guns, rejecting any suggestions that the fire’s catalyst could be weather-related. “It’ll start getting cooler,” he insisted. But, as Newsom noted, even if Trump’s theory is true, California only oversees three percent of its own land. Almost 60 percent of the land, and most of the raking, is the responsibility of the federal government.