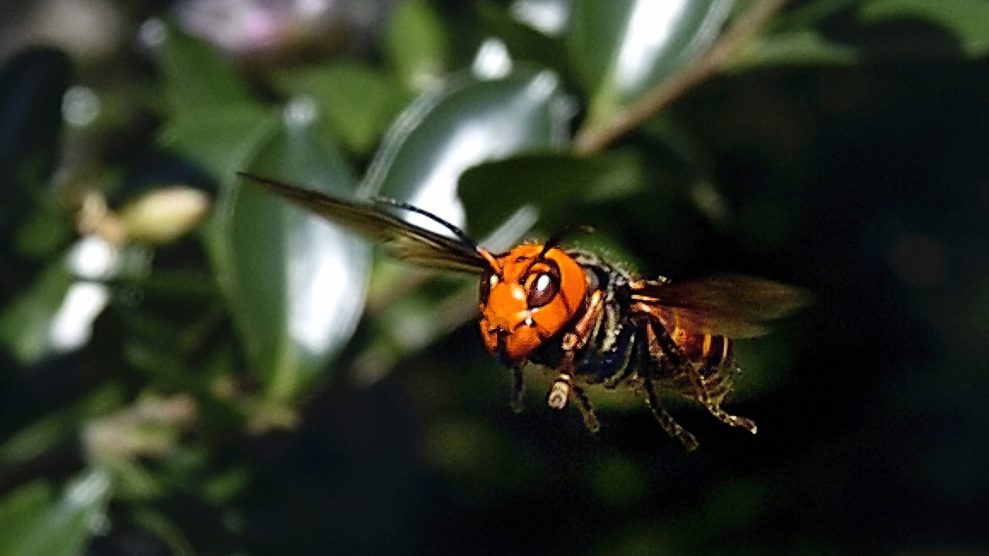 On Saturday before dawn, entomologists launched their attack on a colony of snoozing murder hornets. Clad in cartoonish protective suits and brandishing a vacuum hose, they sucked 85 wasps alive from the nest and suffocated the rest with carbon dioxide and expanding foam. It’s the first time a nest of Asian giant hornets (as they are more correctly known) has been located and destroyed in the United States.

To find the elusive nest, researchers carried out some high-tech subterfuge. They captured a hornet, attached a tracking device, then followed the insect as she returned home. The signal led them to a nest tucked inside the crevice of a dead alder tree.

“We’ve now demonstrated that we can actively trap, track, find the nest, and take it out,” Sven-Erik Spichiger, an entomologist with the Washington State Department of Agriculture, said in a virtual press conference on Monday. “And that’s really what we need to be able to do to win the war overall.”

Native to Asia, the hornets first showed up in Washington and British Columbia late last year. The good news is that the 2-inch-long insects rarely attack people. It’s the hornets’ voracious appetite for bees that’s earned them the murderous moniker. They’ll eat just about any insect, but a bustling beehive “is like a supermarket, just an endless supply,” said the University of Exeter’s Peter Kennedy, who studies a similar wasp in Europe and has advised the WSDA. During the hornets’ horrifying-sounding slaughter phase, “a few Asian giant hornets can take out 30,000 healthy honeybees in just a matter of a few hours,” said Spichiger at a press conference on Oct. 23.

“A few Asian giant hornets can take out 30,000 healthy honeybees in just a matter of a few hours.”

If the hornets gain a foothold in North America, researchers are worried that they will decimate honeybee populations and hamper their vital crop-pollinating work. To stamp out a hornet infestation, it’s crucial to destroy the nests and kill the queens, says Kennedy.

But getting to the nests in the first place is tricky, as the Washington state entomologists learned. The best bet to find a nest is to let a wasp lead the way with the help of a so-called Judas insect that betrays the location of its kin. To prepare a Judas wasp for its treacherous mission, the team captured the insect in a trap baited with a wasp-attracting cocktail of orange juice and rice wine. Next, they used dental floss to affix a miniature radio transmitter to its waist like a tiny belt. The wasp refueled with some strawberry jam, then headed for home—with the researchers in hot pursuit. The battery-powered transmitter sends out “chirps” on a radio frequency that are picked up by a handheld receiver tuned to that frequency, much like a car radio antenna. As the team zoned in on the wasp, the chirps got louder.

“It was getting very nerve-wracking as we got closer and closer. We were fully expecting them to be nesting in the ground and come boiling out like they do on YouTube and start stinging us,” said WSDA entomologist Chris Looney. “And then suddenly we realized that they were actually flying out [of a tree] right above [Spichiger’s] head. It was pretty exciting. I felt like I was in a movie, like a spy or something.”

The team’s successful espionage came after two failed attempts with a different tracker that sends a Bluetooth signal to a cellphone. Earlier this month, researchers attached the device to a wasp and followed it for a while, but soon lost track of the signal. “It actually flies a lot faster than we can run through 10-foot-high blackberry hedges, so it out-flew us,” Spichiger told NPR on Oct. 17. Bluetooth only works over a distance of a few hundred feet, whereas radio signals can travel much farther.

Radio technology has been used by biologists for decades to track mammals and birds with tags attached to collars, necklaces, and tiny backpacks. But it’s only recently that miniaturization of these devices has made tracking insects possible. Although the lightest tags weigh just 200 milligrams (about seven grains of uncooked rice), only chunky insects like hornets or large beetles can retain their aerodynamic prowess with such a cargo. “We’re working at the edge of what’s possible,” said Kennedy.

Matthew Siderhurst, professor of chemistry at Eastern Mennonite University, agrees. Attaching trackers is “quite a saga to figure out for different insects,” he said. His team pioneered the Judas insect technique on invasive coconut rhinoceros beetles in Guam. To track the beetles to their cryptic breeding sites, the researchers glued transmitters to their backs. After trial and error with super glue, dental adhesives, and hot glue, they settled on cool melt glue because it dried quickly and didn’t injure the beetles. “You don’t want to cook your insect while you’re putting on the tag,” he said.

When researchers in Europe tried to glue transmitters to yellow-legged hornets, close relatives of Asian giant hornets, it didn’t work. The insect became top-heavy, spinning around and dropping to the ground. “After watching quite a few hornets breakdancing on the floor, you realize this isn’t going to work,” said Kennedy. Inspired by images of helicopters carrying heavy loads, they ended up tying the tags to the wasps’ undersides with cotton thread. “They were able to readily fly with tags that would be up to 80 percent of their actual weight, which is quite impressive.”

WSDA researchers used a similar approach to affix trackers to Asian giant hornets with dental floss. “This worked out fairly well,” Spichiger said in the Oct. 23 press conference. “We did have one of the hornets get hold of the string and chew it off,” however, he added. “We may look at different kinds of string going into next year.”

Aside from seeking out pests to exterminate, researchers also track insects to learn about their movement and dispersal patterns. A different technology can work for insects that are too petite to carry a radio transmitter. Harmonic radar tags modify a radar signal emitted from a handheld device and reflect it back. Because the tags don’t use batteries, they can weigh as little as 3 mg (about one-tenth of a rice grain), and they’ve been used to track invasive spotted lanternfly and brown marmorated stink bug.

The Washington team believes there’s one or two more nests left in the area. But Spichiger said Monday, “We’re going to continue to look for those [nests] and just keep fighting these battles until we have eradicated Asian giant hornets—if that’s possible.”