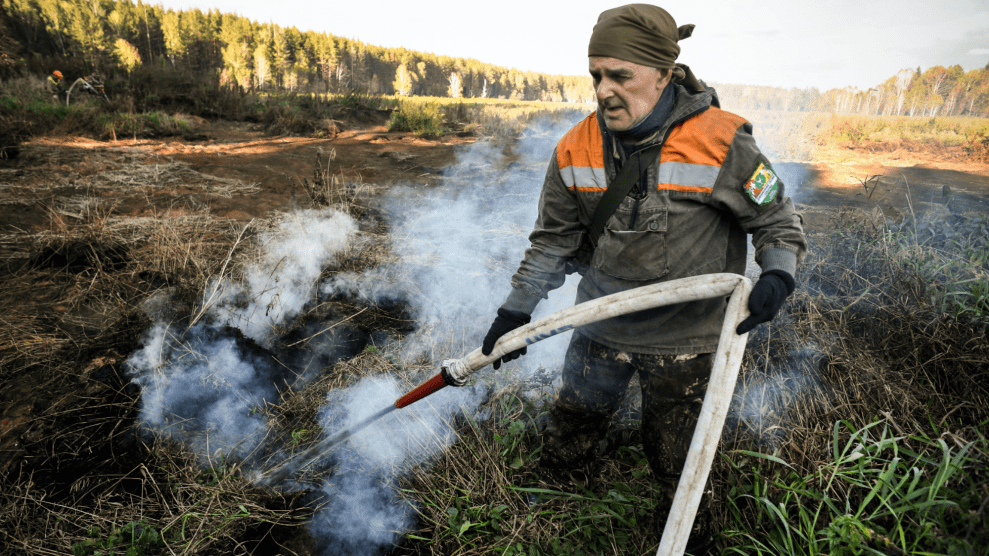 A local activist extinguishes a peat fire near a village outside of the Siberian city of Novosibirsk in September 2020.Alexander Nemenov/Getty

The largest fires on Earth aren’t the monsters that have been burning across California and Australia, but the zombies smoldering in the soils of the Arctic and tropics. Undead fires live on in peat: wet, carbon-rich soil made from dead vegetation that accumulates over hundreds or even thousands of years. When it dries out—as it is increasingly doing on a warming planet—peat fires can fester, slowly spreading both laterally and vertically for months and releasing astonishing amounts of greenhouse gases. In the Arctic, which is warming twice as fast as the rest of the planet, peat fires even smolder under the snow throughout winter and reanimate in the spring, alighting as new surface wildfires. Hence, zombie fires.

Since they’re much less conspicuous than your typical wildfire, the dynamics of peat fires have been a bit of an enigma for scientists—for instance, how do they spread? Where do they end up in the landscape? How quickly do the fires propagate? But some clever new modeling, known as cellular automata, is giving fire scientists unprecedented insight into the life, spread, death, and rebirth of zombie fires. That could help firefighters better predict where the zombies might later emerge.

“The magic of cellular automata is that by aggregating very simple rules in a space, it actually is able to capture what is called an ‘emergent behavior,’ which is a behavior that is extremely complex,” says Imperial College London engineer Guillermo Rein, coauthor of a new paper describing the work in the journal Proceedings of the Combustion Institute. “You can do what is called ‘super real-time’—in the sense that you get results of the future location of the fire before the fire is already there. If you want to help firefighters predict the movement of a fire, you have to have super real-time.”

“You can do what is called ‘super real-time’—in the sense that you get results of the future location of the fire before the fire is already there.”

The modeling works like this: The researchers first partition a stretch of imaginary peat into square cells—think of it like a sheet of graph paper. Each of these cells is given simple states: For instance, does it contain fuel or not? (In this case, the fuel is sufficiently dry peat.) And has a cell burned yet? Cells of course border one another, and thus influence each other’s states as the fire spreads. This comes with certain probabilities—maybe a cell has a high probability (say, 95 percent) or a low probability (say, 5 percent) of also burning when any of its neighbors are. “It’s very simple rules,” says Rein. “One: If the nearby cells are burning with a probability, you start burning. And when you’re burning after X amount of minutes, you stop.”

Because the model operates on simple rules, it doesn’t require much computational power—running it 100 times takes five seconds on a regular laptop. “So you run many of them, and then you put everything together,” says Rein. “And then you see these maps of probability: Where the fire will be the fastest, where the fire will be the strongest.” Rein can add still more variables like wind and topography, even roads and rivers that act as firebreaks. “You can literally complicate as much as you want, and it will still be really, really quick to run,” he says. Because those cells operate individually and collectively by certain rules, together they create the emergent behavior of a real-world peat fire.

But as the old saying goes: All models are wrong, but some are useful. There’s just no way that Rein and his colleagues can perfectly simulate a smoldering peat fire, given the galaxy of variables involved. So for their new study they compared their simulated model fires to what they and other scientists have already observed with controlled burns set experimentally in actual peatlands. They also got drone footage that showed the spread of a peat fire in Indonesia in 2015. Sure enough, their model jibed with the real-world observations of how peat fires spread, and how at times individual fires in a landscape merge into several bigger fires. “That was being predicted by the model,” says Rein. “We think that, of course, in science you can always develop any model further, but this model has a substantial level of credibility already.”

McMaster University ecohydrologist Mike Waddington, who studies peat but wasn’t involved in the research, agrees. “Researchers have long known that as peatlands dry they switch from a fire break to a fire propagator,” he says. “And this study, for the first time, has modeled how peat fires ignite and spread to better estimate what that critical moisture content is.” The modeling also helps researchers understand how peat fires “transition” from smoldering in the ground to igniting surface vegetation fires, then digging into the soil once more.

“This was a case where the zombie fires truly became a nightmare for the Netherlands,” Rein adds.

Understanding both the spread of peat fires and how they transition is all the more critical as the planet, and particularly the Arctic, rapidly warms. When peatlands burn, they can release thousands of years’ worth of accumulated carbon into the atmosphere in great burps, further warming the planet—we’re talking up to 100 times the amount of carbon that’s released from the average above-ground wildfire. “I also think this research makes a very compelling case of the importance of rewetting degraded peatlands,” says Waddington. “The restoration and conservation of tropical and northern peatlands is very important for global climate mitigation.” This means returning water to peatlands previously drained in the name of developments like roads, or for agricultural reasons, like to convert peatlands to fields for crops and livestock.

“The restoration and conservation of tropical and northern peatlands is very important for global climate mitigation.”

For land managers, such modeling could help them determine when it’s safe to do prescribed burns, in order to clear out vegetation aboveground without accidentally igniting the dried peat below. They can measure soil moisture quite easily with simple instruments stuck into the ground, but the trick is knowing which reading signifies that it’s safe to proceed with a burn. “Obviously, people know that you should not do prescribed burning while your peat is dry—everybody knows this,” says Rein. But this work quantifies the peat moisture levels that could mean the difference between a controlled burn that accidentally sparks a peat fire below, and avoiding that fate. “The model is able to accurately predict this,” Rein adds. Such caution is critical because once you start a peat fire, it easily spirals out of control.

There’s often no way to forcibly extinguish a peat fire. These things can burn several meters deep, so the fire’s moving both horizontally and vertically, making it hard to tell where to concentrate efforts. Even then, fighting them is dangerous work, as crews must essentially walk on fire. The resulting fumes also tend to linger around ground level, bad news both for firefighters and nearby cities. (A typical wildfire’s heat produces rising air that carries smoke high into the atmosphere—often far from where it started.)

Unlike a typical wildfire—which is actually beneficial in the sense that it clears out brush to periodically reset an ecosystem—peat fires are very bad, whether they’re set by humans or naturally by lightning strikes. “Peat fires are monsters. They are devastating,” says Rein. “Nature has no role whatsoever for the peat to burn.”

Not only do they release far more carbon than a vegetation wildfire, but that carbon ain’t coming back to Earth anytime soon. When a forest burns, it releases carbon but then sequesters that carbon again when it grows back; trees take in CO2 and spit out oxygen. Peatlands, by contrast, develop layer after layer of dead vegetation over thousands of years, so we can’t rely on them to quickly reabsorb the carbon lost when they burn.

Yet across the tropics and the Arctic, they’re burning more and more, a harbinger of a kind of zombie fire apocalypse. Perhaps now, though, we can fight off the horde with weaponized math.