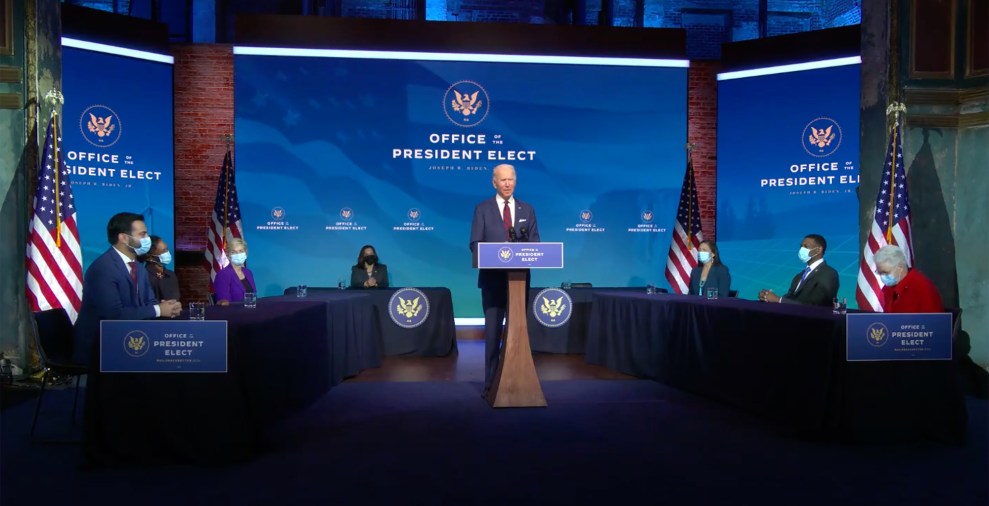 President-elect Joe Biden is entering office with the most ambitious plans for climate change of any president in history. In a Saturday afternoon speech from Wilmington, Delaware, Biden formally announced six members of his Cabinet who will be key to carrying out that agenda.

“Folks, we’re in a crisis. Just like we need to be a unified nation in response to COVID-19, we need a unified, national response to climate change,” Biden said, with his appointees masked and seated at a distance to the side of the stage. “We need to meet the moment with the urgency it demands just as we would any national emergency.”

Biden’s announcements include a series of firsts: The first Native American to serve in a Cabinet, the first African-American to lead the White House’s Council on Environmental Quality, the first Black man to ever lead the Environmental Protection Agency, and the first-ever national adviser on climate change.

Many of the speeches Saturday underscored the theme that tackling the climate crisis will require a truly comprehensive, coordinated approach from day 1 to make up for the lost time of the Trump administration’s inaction. These nominees join a climate-focused Cabinet that already include Pete Buttigieg at Department of Transportation and John Kerry as the special climate envoy who will be the first to sit on the National Security Council.

Here’s the rundown of the core climate team:

The Environmental Protection Agency has powers granted by Congress to push our economy in a cleaner direction, by issuing pollution regulations for the power sector and cars and methane emissions from fracking operations. Biden’s nominee to lead the EPA is North Carolina’s environmental regulator, head of the Department of Environmental Quality, Michael Regan. Regan, a former EPA official, made a name for himself negotiating settlements to clean up coal ash and toxic chemicals known as PFAS in the state.

As the first Black man and second African-American to lead the EPA, Regan ensured the EPA would “enact an environmental justice framework that empowers people in” in communities that suffer the worst pollution.

The Department of Interior oversees the nation’s public lands, from national parks to holding lease sales for the fossil fuel industry. That also includes the Bureau of Indian Affairs. It’s one reason Rep. Deb Haaland’s (D-N.M.) appointment—the first Native American to join the Cabinet—is so significant. In her speech Saturday, Haaland struck themes that resonate with progressives, addressing the “communities who have shouldered the burdens of environmental negligence.”

Biden introduced the congresswoman as earning “the respect of a broad coalition of environmental groups, labor groups and tribal people,” promising “she will be a true steward of our national parks, our natural resources and all of our lands.”

The Council on Environmental Quality plays a powerful role coordinating the environmental efforts across the entire federal government, including evaluating the environmental costs of building pipelines and highways. Brenda Mallory, who is currently director of regulatory policy at the Southern Environmental Law Center, will work closely with many of the other nominees Biden announced Saturday. Mallory has served under both Republican and Democratic administrations, is a former EPA official, and was the general counsel  for CEQ under Obama.

Jennifer Granholm has strong ties to the auto industry, a holdover of days as Michigan governor during the 2009 financial crisis. Most of Granholm’s work at the Department of Energy will be maintaining the country’s nuclear weapons, but Energy also sets efficiency standards for appliances and drives technological advances in clean energy, nuclear energy, and climate research.

Gina McCarthy will be Biden’s highest-level domestic climate official as the new National Climate Adviser, while Ali Zaidi, who led renewable energy development in New York as deputy secretary for energy and environment will be the deputy.

McCarthy, the former EPA head worked with Biden closely during the Obama administration. “I’m here today because climate change isn’t only a threat to the planet, but a threat to our health and well-being. It’s a threat to people everywhere and the precious natural resources we depend on,” McCarthy said in her speech. “Defeating this threat is the fight of our lifetimes. It will require every community, every sector in the nation and every country in the world.”