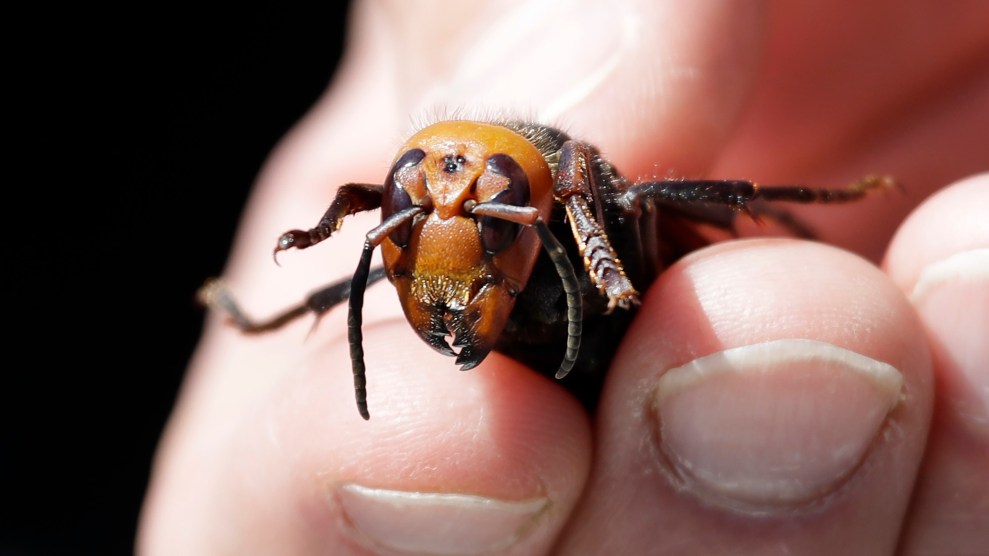 Insects don’t come much cuter than the humble honey bee. Those fetching stripes, the “waggle” dance they do to tell each other where they’ve found nom-noms, that thing where they smear buffalo crap all over their hives.

Excuse me—the more scientific term is dung. But whatever you call it, the fact remains that the Asian honey bee species Apis cerana flies around collecting bird and water buffalo poo not with its hind legs, like it does with pollen, but with its mouth. Back at the colony, it applies the dung as “spots” around the entrance to the hive. That might seem like bad housekeeping, but scientists just showed that there’s a brilliant method to this scatological madness: Heavily spotted colonies repel the bees’ archenemy, the giant hornet Vespa soror, a close cousin of the infamous Vespa mandarina or Asian giant hornet (colloquially dubbed the “murder hornet”) that’s invaded the US.

If you knew what Vespa soror was capable of, you might not be so quick to judge these bees. At nearly an inch and a half long, the hornet wields massive mandibles that quickly guillotine Asian honey bees, which are about a quarter of its size. When one of them finds a nest, it slices up any workers that mount a defense and releases pheromones that tag the colony for its compatriots to find. Soon, reinforcements swoop in, the formidable air force gnawing at the small opening of the nest to fit their outsized bodies through.

Once they’re in, it’s like a human army breaching a castle’s walls: Things are going to go downhill quick.

Once they’re in, it’s like a human army breaching a castle’s walls: Things are going to go downhill quick. The hornets snag the honey bee larvae and carry them off to their own nest to feed to their young. “They’re hunters, so this is like a bonanza for them,” says Wellesley College biologist Heather Mattila, lead author on a new paper in PLOS One describing the insect war. The bees that survive end up retreating, knowing they’re now powerless to stop the looting. “The poor Asian honey bees, they are just plagued by a suite of really relentless hornets,” says Mattila.

Joining Vespa soror in the torturing of these bees is Vespa velutina. Instead of infiltrating the nest, this smaller hornet just hovers around the colony “hawking,” picking off victims on the wing. The bees, though, aren’t entirely defenseless. They’ll actually hiss at the hornets. More famously, they perform “heat balling,” in which the diminutive bees form a swarming mass of bodies around a hornet, raising their temperatures until the invader literally cooks to death.

Honey bees will also perform a hypnotic behavior called shimmering, in which large groups of the insects coordinate their movements to send dazzling waves across their massed bodies. This could serve to confuse hornets. Alternatively, it could be something called an “I see you” signal. “When an animal’s looking to defend itself against a predator, sometimes it’s valuable to the animal to let the predator know that it’s been spotted,” says University of Colorado Boulder social insect biologist Michael Breed, who wasn’t involved in this new research. “That actually subverts a predator’s attempt to be stealthy.”

Still, often that’s not enough for the Asian honey bee. It’s apparently been under such predatory pressure from vicious hornets that it’s evolved to weaponize other animals’ crap. And Mattila and her colleagues have now experimentally shown just how effective that unconventional tactic is.

Working with Asian honey bee hives in Vietnam, the team first of all had to collect dung from pigs, chickens, cows, and water buffalo. (Because: science.) They placed the material near an apiary and snagged the bees that came to collect it, painting the foragers so they could track them once they returned to their hives. Because the researchers were working with multiple hives with varying intensities of spotting around the entrances—they classified them as light, moderate, and heavy—they could actually quantify the effectiveness of the defense.

“The dung spotting around the entrances greatly reduces the time that the hornet spends landed at the entrance and really reduces the amount of time that they’re chewing on those entrances,” says Mattila. In fact, they found that the giant hornets spent a whopping 94 percent less time on highly spotted hives than on control hives. “They can still be outside, hunting individual bees and carrying them away, but they’re not able to execute that next step, which is the really lethal step of getting into the colony,” she says.

Furthermore, the team confirmed that the bees dung-spot the entrances to their hives in response to the presence of the giant hornets. When they exposed colonies to the pheromones that the giant hornet uses to mark hives for attack, the bees performed more spotting than at a control hive where the bees were not exposed to the hormone. In other words, it’s not that the bees like decorating their homes with animal dung, which hornets just happen to hate—this appears to be a deliberate, reactive countermeasure, and it works very well to ward off a coordinated attack by the hornet menace.

The big question now is: How? “It could be that the poop itself is repellent,” says Mattila. Since the hornets are so big they have to gnaw their way into the colony, they would end up getting a mouthful of dung if the entrance is heavily spotted. “And certainly a lot of animals use feces as a way of kind of grossing out predators and keeping them away,” she continues.

Let us count the ways, shall we? The larvae of the tortoise beetle build shields of their own poo and smack their predators with them. Badgers dig rectangular pits to use as latrines, which signals other badgers to back off. Skipper caterpillars have a different problem: Ants are attracted to their dung. So they increase the blood pressure in their bums in order to fire their turds 40 times the length of their bodies, thus keeping the ants at a distance.

In the case of the honey bees, there may be a specific chemical in the borrowed dung that repels the hornets. “It could be something that is plant-based, but is going through an herbivore first, essentially, and is then being foraged on by the bees,” says Mattila. Intriguingly, scientists have observed that Asian honey bees in Japan spread chewed-up plant material around the entrances of their hives, rather than poop. So it could be that the bees in Vietnam are getting the same benefit from some sort of plant compound, only in a rather roundabout way. But scientists still aren’t sure which plant or chemical compound it might be.

Still another theory is that there’s something in the poop that interferes with the pheromones at play between hunter and prey. “It could be masking the smell of either the colony itself, or masking the pheromone that [the hornets are] depositing as a marker for targeting that colony,” says Mattila. “All of these are kind of open hypotheses that we would need to figure out.”

Once scientists do figure out what’s going on here, it could well have implications for the welfare of western honey bees in the US. This species has not evolved alongside the giant, voracious hornets that menace Asian honey bees, so they’re not equipped to put up as strong of a defense. And in late 2019, the Asian giant hornet landed in North America. (The first nest found in the US was removed this October.)

It’s not like scientists can breed this poo-spreading behavior into western honey bees. But if they can isolate a particular compound, or variety of compounds, that make animal dung so repulsive to hornets, perhaps beekeepers in North America can apply it to hives, should the Asian giant hornet begin spreading here. “I think that’s the most immediate, obvious application that could come out of this groundbreaking research,” says University of British Columbia biochemist Leonard Foster, who studies the giant Asian hornet but wasn’t involved in this research. “If that compound can be discovered or identified, then for sure, it could be used as a way to ward off the Asian giant hornet.”

Now for a more philosophical question: Is this dung spotting actually considered tool use for the bees, as the authors of the paper claim? That’s wading into fraught territory, as biologists fight constantly about what’s considered a “tool.” The authors say the dung spotting meets four criteria put forth by one definition of tool use: The bees employ an environmental object (the poo), they alter another object (their home) with the tool, the bees manipulate the tool (with their mouths, unfortunately), and finally the bees orient their tool by spreading it around the hive entrance. “Thus, collection of feces and other filth materials from the environment and their application to nest surfaces for the purpose of defense by A. cerana meets current conceptions of tool use,” the authors write.

Foster notes that the poo-spreading is actually similar to another already-documented behavior in honey bees, in which they collect plant resins to use as antibiotics for the colony. “Where you draw the line in what’s a tool and what’s not a tool seems like a little bit of a semantic argument to me,” says Foster. “For sure, this is extremely interesting behavior. Whether it’s the equivalent of a human chipping a rock to make an arrowhead, or something like that, I think is not yet agreed upon by the whole community.”