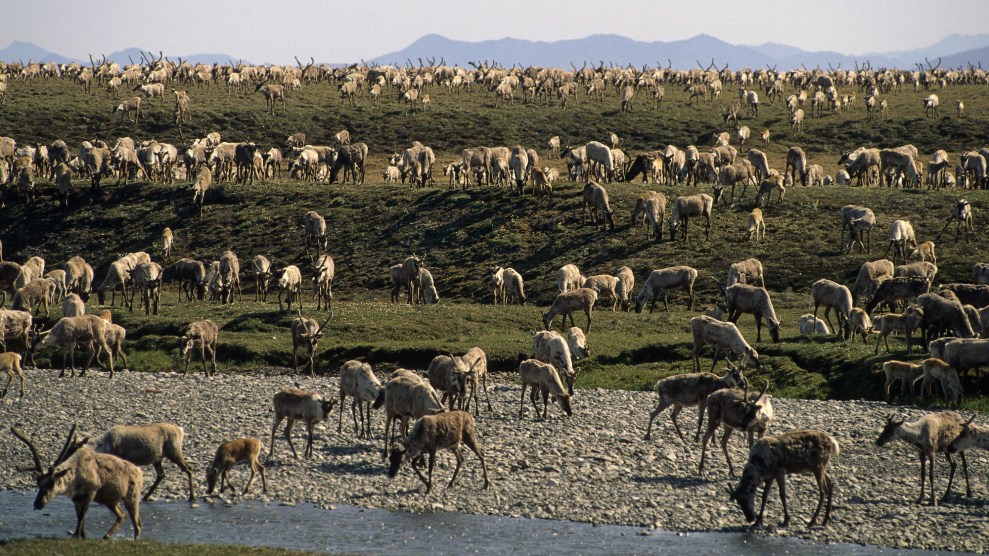 The same day the nation watched pro-Trump supporters stage a coup at the Capitol, the Bureau of Land Management held its most controversial auction yet in the 1.5 million-acre Arctic National Wildlife Refuge, an environmentally sensitive coastal plane that the native Gwich’in people call the “The Sacred Place Where Life Begins.” The firesale for oil and gas leasing only raised a small fraction of revenue Republicans had estimated it could generate. Though the sales aren’t final yet, environmentalists already suspect the Trump administration will skip mandatory steps in its rush to approve leases before president-elect Joe Biden’s inauguration.

Trump’s real intention is “to clog up the works and slow the Biden administration down.”

The Trump administration has managed to rush through some of its most enduring environmental rollbacks in the president’s final days. By now it’s clear that the pandemic, the election, and even Wednesday’s domestic terrorist attack won’t slow down the polluter free-for-all. Earlier this week, the Environmental Protection Agency finalized a regulation that censors the science the agency can consider in its rulemaking, a policy that was first championed by the tobacco industry. And in the last few months, according to a list assembled by the advocacy group Public Citizen, the administration has rushed to finish at least 15 other environmental reversals like it.

One of the quickest and easiest way to clean up the mess that Trump has made? The slim Democratic majority in Congress will have the chance to invoke the Congressional Review Act (CRA). The law allows a simple majority of Congress to reverse regulations that a president finalized in the last 60 working days of the congressional calendar. In 2017, Republicans used the once-obscure law to reverse 14 Obama regulations, including an environmental rule regulating coal ash runoff into streams.

“The CRA is a tool, albeit an imperfect tool, to undo a lot of the damage that Trump has done,” said Matt Kent, Public Citizen’s regulatory policy associate. But there’s a cost to using it. Each regulation must be addressed individually, within the first few months of Congress, sucking up valuable time when the Biden administration will also need to seek Senate confirmation for appointments and Senate floor time to debate new legislation. Kent doesn’t expect the CRA to be used as a “big firehose,” but as a more targeted approach.

Two good candidates for the CRA are the recent rule to censor science and a second to manipulate how the EPA considers costs and benefits to new rulemaking, both of which will make it much harder to strengthen other environmental standards. (The Trump administration has tried to circumvent the likelihood of their repeal by arguing that they are not subject to the CRA. The administration claims—incorrectly, environmentalists say—that the rules are procedural changes, which are exempt.)

There are other problems with the CRA: The window of 60 days would miss some of the most damaging reversals of the Trump administration, like freezing fuel efficiency and clean power sector standards and weakening restrictions on methane from gas operations. Second, it’s unclear how the CRA, as a largely untested law in courts, would apply to Trump’s other actions like lease sales in the Arctic.

The other options left to the Biden administration won’t be as quick. Some of Trump’s sloppiest rules may be thrown out by courts: Two dozen states are already suing over Trump’s fuel economy rules finalized in March. But for other rules, agencies like the EPA will have a daunting task: writing their justification for rescinding the weak rules, and then rewriting draft and final regulations for stronger protections. All of this will be subject to public comment—a process that will take time and resources.

All told, it won’t be an easy feat for Biden to wipe the slate clean from Trump’s mess. The more rules that Trump’s agencies destroy in his last few days in office, the bigger the challenge facing the Biden administration to pick up the pieces, let alone advance on goals to seriously tackle climate pollution. Trump’s real intention is “to clog up the works and slow the Biden administration down,” said Richard Revesz, an environmental regulatory expert at New York University’s Institute for Policy Integrity. “Repealing and replacing them will take time, and will tie up agency resources. And I think that’s exactly what the Trump administration is trying to accomplish.”