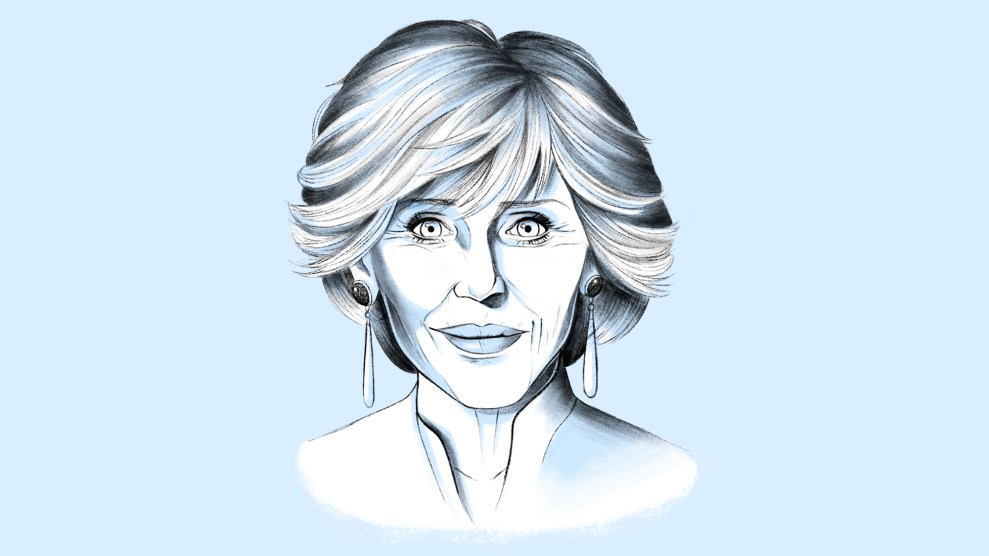 Jane Fonda didn’t invent the genre of the multihyphenate star, but she’s certainly spent her nearly 70-year career pushing the boundaries of the term. As an actress-fitness guru-activist, she’s acquired an expansive collection of trophies, a closet full of belted leotards, and a long record of arrests. As an advocate, Fonda has seemingly taken on as many causes as she’s had roles in feature films, ranging from anti-war protester to outspoken feminist. These days, at 83 years young, here’s what’s atop her civil disobedience to-do list: dealing with climate change.

For years, Fonda has been spotted protesting Arctic drilling and new pipelines—including this week, when the fully-COVID-vaccinated Oscar winner traveled to Minnesota to protest the Line 3 tar sands pipeline alongside Indigenous activists. But she said the true urgency of the climate crisis didn’t fully hit her until she witnessed the widespread student protests of 2019—and all their powerful teen energy and rage.

Sure, Fonda had taken measures to reduce her own carbon footprint in whatever ways she could. But those efforts felt, as they do for so many frustrated environmentalists, insufficient. “I knew that it wasn’t enough because I’m famous and I have a platform,” she told Grist. “But I just didn’t know what to do to be strategic about it.”

“35 million Americans…are alarmed about the climate crisis but…haven’t done anything because nobody asked them.”

With the help of some well-connected friends—activist-authors Bill McKibben and Naomi Klein, as well as Greenpeace USA’s Executive Director Annie Leonard—Fonda moved to DC later in 2019 and launched Fire Drill Fridays, a weekly teach-in and demonstration to draw her massive following into the climate movement. And given the number of women who have held Fonda up as a role model since long before Greta Thunberg was born, it’s perhaps no surprise that her efforts have tended to engage a more mature audience. Suddenly, the Eileen Fisher demographic was descending upon the US Capitol to peacefully protest in the name of climate awareness. Fellow famous octogenarians, including Fonda’s Grace and Frankie costar Lily Tomlin and feminist icon Gloria Steinem, also showed up—and, like Fonda, often left in handcuffs.

Then COVID-19 hit, and the whole campaign had to move online.

Police have never stopped Fonda, and a global pandemic wouldn’t either. Over the course of 2020, 9 million viewers Zoomed in to Fire Drill Fridays. (“Dig this!” she exclaimed, before relaying that statistic.) The virtual sessions also evolved in resp onse to current events, broadening to make connections between climate and issues like race, gender, and health care access.

Grist spoke with Fonda—on International Women’s Day, no less—about the roles that both younger and older women have to play in the climate movement.

Eve Andrews: Fire Drill Fridays have certainly reminded the world that Jane Fonda, the activist, is as rowdy as ever. But why the emphasis—at least, in pre-COVID days—on getting arrested?

Jane Fonda: You know, you don’t start out with civil disobedience. But when you’ve marched and protested and petitioned and lobbied, and the elected officials haven’t paid enough attention, the next step is civil disobedience. Because, of course, it brings attention to the issue. It raises people’s awareness of the urgency. And I know because I was 82 years old, that if people started seeing Jane Fonda getting arrested with more and more people with her, that a lot of people would start saying, “Well, God, if this old lady can do it, why aren’t I out there?”

And by God, it worked. People started coming from all over the country. People came from Europe! And they had never done it before, for the most part, but many of them kept coming back. So pretty soon they got to be old hand at getting arrested. We knew from research at Yale that there are 35 million Americans who are alarmed about the climate crisis but don’t know what to do and haven’t done anything because nobody asked them. So our goal was to ask them. We wanted to mobilize people who know there’s a climate crisis but have never done anything.

EA: You mentioned that Fire Drill Fridays were inspired by student activists. It’s hard to miss that most, if not all, of the very prominent student climate activists are young women. How does that compare to your experience in your early years as part of the anti-Vietnam War and civil rights movements?We always have a call to action and people respond. People who have never done this in their lives are calling and writing their elected officials. And we tell them how to do it and what to ask for and so forth. So it’s gone from one person’s idea to an organization’s idea to a national movement. And, you know, when I can—after COVID is over and after I finish with a few professional acting things—I’m going to be back out there traveling the country and starting local Fire Drill Fridays.

JF: Well, back in the anti-war days, men were the leaders, and women did the schlepping. Women got mad about doing the schlepping and joined the women’s movement. It was kind of what turned a lot of women into feminists.

“Women have been socialized to think collectively. We understand interdependence.”

I mean, think about it: Women are sewing bees, women are book clubs, women are quilters. Women, they do things together and they talk. We go to our women friends crying and saying, “I feel the bottom is dropping out. Please help me. What can I do?” But the important thing, I think, is that—well, first of all, women are more impacted by the climate crisis just as they’re being more impacted by the pandemic. But also, women have been socialized to think collectively. We understand interdependence. We have, over millennia, depended on each other for survival more than men have.

But women are holding fast to the collective good. And I could see as the crowd at Fire Drill Fridays got bigger, that it was women. And because I’m older, I guess I attracted older women. But it made me happy because the young climate activists were saying, “Where are the old people, you guys who can vote? Come on!”

EA: How did an intergenerational connection, between the older women and the younger women, show up in the social movements of your own youth?

JF: It wasn’t at all intergenerational. In fact, there was tremendous tension between generations, especially around the war. And I think it was most common that parents were scared, angry, disagreeing with their children, who were part of the civil rights movement or part of the anti-war movement. You know, it was just the opposite.

After the murder of George Floyd, the unbelievable uprisings that were happening all over the country, the diversity of those uprisings, not just racially but generationally, was shocking. It was unbelievable. And, you know, that’s why I’m so very hopeful.

EA: What advice do you have for all the young women who are leading the climate movement today, and who are also gaining some notoriety and public attention for their roles in doing so?

JF: I know a lot of them. They’re so smart. My message is: Keep it up! Keep doing it! You make a difference! Your voices matter!

And tell your stories. The young speakers who spoke in D.C. at Fire Drill Fridays just broke my heart when they talked about how the climate crisis is affecting their lives and the grief they’re carrying—about what has been lost and what they know is going to be lost.

Stay brave, and understand that those who come after you and criticize you, they’re doing it because you’re having an effect, because you matter. Don’t let them stop you. Kind of what my life has been about, right?