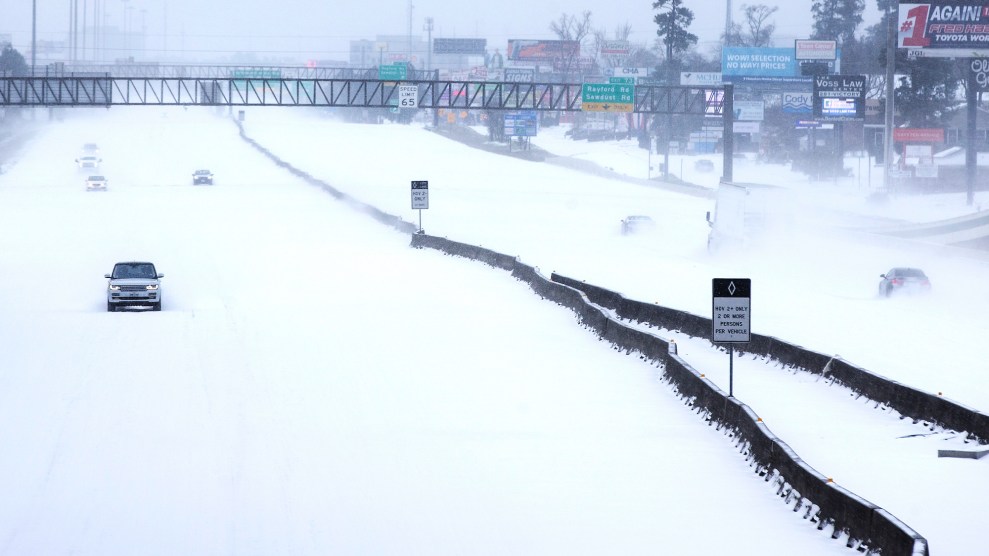 Interstate 45 near The Woodlands, Texas covered in snow.Brett Coomer/Houston Chronicle/AP

One night last month during the historic winter storm in Texas, Sharon Wilson was huddling in her sleeping bag inside her freezing home when her phone buzzed. A man was messaging her on Twitter from the small town of Wickett, in the sparsely populated part of west Texas that overlaps with the Permian Basin, home to some of the densest oil production in the state. He asked for Wilson’s help, saying he could smell noxious fumes coming from a nearby compressor station, which moves gas along the network of pipelines by maintaining the necessary pressure. He was worried the fumes could make his family and neighbors sick.

Wilson wasn’t surprised by the man’s message. She knew when the power went out on 4.3 million Texans last month that the oil and gas industry would face a disaster of its own. A seasoned field advocate for the environmental watchdog Earthworks, Wilson, 68, regularly measures climate and air pollution from oil and gas fields using a specialized camera. Even when she was stuck at home because of the snow and the pandemic, she was still busy trying to track down leaks. In fact, she told me, she had never worked harder than she did in the weeks that followed the deep freeze.

When things go awry in the oil and gas fields, “there is no help.”

Like most of the Texas infrastructure, the state’s many oil and gas sites weren’t built to withstand freezes and other kinds of extreme weather. The vast chain of pipelines, tanks, and wells is vulnerable when the weather turns bad. “The supply chain is very fragile,” Wilson explains. There are hundreds of thousands of wells in Texas, and very little gas is stored onsite. The gas, which contains a host of pollutants, including methane, propane, butane, crude oil, chemicals, and radioactive elements, has to be sent to tanks for separation, then onto a network of pipelines and compressor stations before reaching the refineries in Texas’ more populated areas. If at any point there’s a problem—like a mechanical issue with a switch or a frozen valve—everything upstream gets choked back, and the entire system is subject to too much pressure. The only place for the gas to go is in the air.

In the aftermath of the rolling blackouts, much of the political narrative centered on what caused the blackout. Some Texas Republican leaders instead pounced on falsehoods that frozen wind turbines were to blame, even though data from the state utility body ERCOT showed most of the outages were from gas shortages caused by blackouts at the refineries. Far less attention has been paid to the disasters closer to the actual locations for drilling, and the unintentional release of pollution throughout the supply chain for oil and gas. “Most of the world focuses on the refineries and the big facilities, not realizing that it all starts with a hole in the ground somewhere,” Wilson says.

Without power or water of her own, unable to get out on Texas’ snowbound roads, Wilson tried to get to the bottom of what was happening in Wickett by calling the company line, which repeated the same rote information about power outages affecting operations. She helped the man (who requested anonymity for speaking out against the oil industry) file a complaint with state environmental regulators. They haven’t heard about any resolution—an outcome that didn’t surprise Wilson. When things go awry in the oil and gas fields that are sending fossil fuels to downstream facilities for processing and distribution, Wilson says, “there is no help.”

This lack of accountability is the byproduct of a political system built on intentionally limited oversight of the energy industry. Texas does not regulate methane emissions, the main component of natural gas. A greenhouse gas, methane has as much as 84 times the warming potential of carbon dioxide. Companies do not have to disclose their methane emissions to the state (or to the federal government, thanks to Trump), and for the other air pollutants that coexist with gas, the self-reporting is uneven and inconsistent at best. Most of the time, companies disclose one pollutant, like sulfur dioxide, or non-methane natural gas, despite methane comprising most of the gas. Companies don’t have any incentive to do better because there is only limited enforcement by environmental regulators, who visit sites irregularly. According to state public records obtained by Earthworks, they have only checked out the highly specialized camera equipment comparable to what Wilson uses 48 times since 2017 in the state’s most active oil and gas region.

Texas relies on its vast network of operating companies to self-report detected emissions leaks. In cases where emissions are not regulated, like methane, it’s entirely up to the company whether to report them at all. Companies are required to self-report emissions events to TCEQ to avoid fines for exceeding their pollution permits, but while larger and more cautious companies may report their emissions, some notoriously do not not, because Texas’ limited environmental oversight means they rarely get caught. Inspectors and regulators don’t visit these sites, and enforcement grew even spottier in the pandemic. There’s no strong federal backstop, either: The EPA has a long tradition of deferring to the state enforcement. In Texas, it has only collected infrared images and air monitoring data with flyovers over Beaumont, Corpus Christi and Houston—completely missing Texas’ most active oil and gas fields.

Because of that emissions free-for-all, a month after Texas’ deep freeze, we still don’t have much of an idea of how much climate and air pollution came from the production side of oil and gas. Earthworks and another environmental group, Environmental Defense Fund, have spent the last month navigating the byzantine database from the regulatory body, the Texas Commission on Environmental Quality (TCEQ) to determine how much pollution escaped into the atmosphere. EDF found, based on TCEQ data, that for 13 days in February, Permian Basin emissions of volatile organic compounds, a component of smog, were 35 times higher than in January.

Now well into March, the reports coming in keep showing a situation far worse for air and climate pollution than we knew.

According to EDF’s analysis based on reporting to TCEQ data gathered in early March, levels of volatile organic compounds are high, and even climbed in the weeks following the disaster, as shut-down equipment came back online again. EDF reported 3.5 million pounds of extra pollution in the air, based on filings in TCEQ immediately after the event, and Earthworks found on TCEQ 483 emission events filed by companies for the month of February, twice as many as January.

Environmentalists suspect these numbers underestimate the true toll. “We don’t trust the TCEQ data from the oil fields,” says  Colin Leyden, EDF’s Director of Regulatory and Legislative Affairs. “It isn’t an accurate picture for the best of times.”

Now well into March, the reports coming in keep showing a situation far worse for air and climate pollution than we knew. As wells that were out of commission because of the freeze started up again, emissions from gas spiked as pressure in the supply chain went haywire.

The situation alarmed state Representative Vicki Goodwin (D). Earlier this month, she asked on Twitter, “What can we do to prevent the emissions in the future? Does this square with what the producers said in the investigative hearings?” Wilson and a handful of state Democrats suspect Texas politicians and their oil benefactors are trying to direct attention away from the bigger problem—gas production—by pinning the blame entirely on the power plant operators and regulators.

1/2 To summarize TCEQ's report: for 20 hours there was an "emissions event" – approx. 7,531 lbs of natural gas released. Producers brought gas wells back on after being shut down by the freeze. The overwhelmed system had too much pressure. Gas was let go, protecting the pipeline. https://t.co/tjPofFT6lo

In the next month, a handful of environmental groups will continue to fill in the gaps in data after the recent freeze. EDF commissioned a plane to fly over the Permian Basin in late February to collect information on methane emissions, and they’re currently waiting for that data to be analyzed.

Wilson, meanwhile, plans to hit the road as soon as she can after her second COVID-19 vaccine, armed with her camera to make the invisible methane gas visible to the public. She can’t take on the whole Permian Basin alone—she wishes state leaders and the EPA would help her. But “until the political situation changes in Texas,” she says, “it’s really not realistic to think that that anything’s going to get better here.”