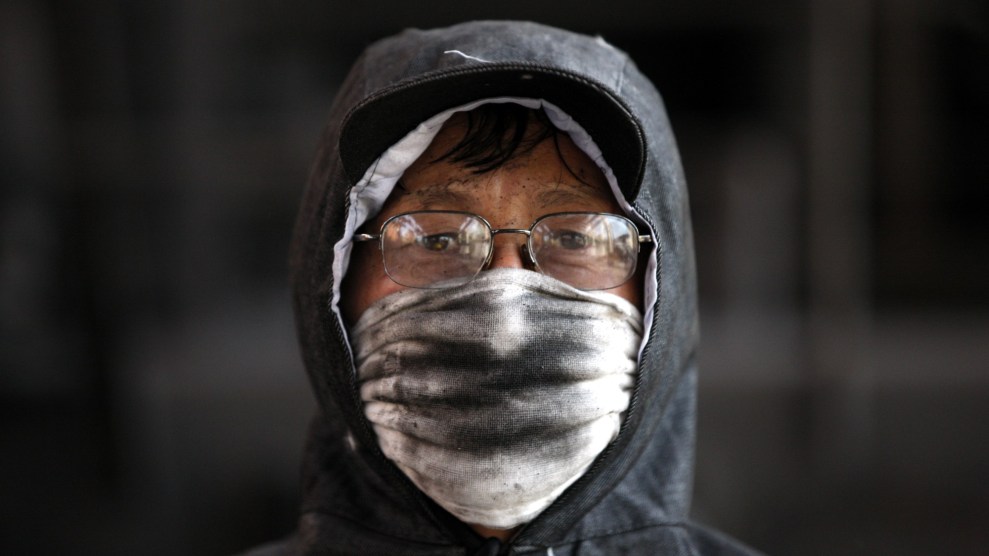 A worker at the rail repair unit of a Chinese coal mine in 2015.Jie Zhao/Corbis via Getty

This story was originally published by Yale Environment 360 and is reproduced here as part of the Climate Desk collaboration.

China’s National People’s Congress meetings, which ended earlier this month, were shrouded in both a real and figurative haze about how strong its climate ambitions really are and how quickly the country can wean itself from its main source of energy—coal.

During the Congress, air pollution returned to Beijing with a vengeance, hitting the highest levels since January 2019, as the economy hummed out of the pandemic. Steel, cement, and heavy manufacturing, predominantly backed by coal power, boosted China’s carbon dioxide emissions 4 percent in the second half of 2020 compared to the same pre-pandemic period the year before. At the same time, the goals in the country’s 14th Five-Year Plan on energy intensity, carbon intensity, and renewables were hazy as well, little more than vague commitments to tackle carbon dioxide emissions.

Coal remains at the heart of China’s flourishing economy. In 2019, 58 percent of the country’s total energy consumption came from coal, which helps explain why China accounts for 28 percent of all global CO2 emissions. And China continues to build coal-fired power plants at a rate that outpaces the rest of the world combined. In 2020, China brought 38.4 gigawatts of new coal-fired power into operation, more than three times what was brought on line everywhere else.

China has pledged that its emissions will peak around 2030, but that high-water mark would still mean that the country is generating huge quantities CO2—12.9 billion to 14.7 billion tons of carbon dioxide annually for the next decade, or as much as 15 percent per year above 2015 levels, according to a Climate Action Tracker analysis.

This continued reliance on coal highlights the dichotomy between China’s overriding goal of fostering economic growth to lift the living standards of its 1.44 billion people and the country’s desire to cut CO2 emissions. In recent months, China’s leadership has signaled a move toward deeper decarbonization by reiterating its Paris Agreement pledge of a 2030 emissions peak and by vowing to reach carbon neutrality by 2060, the latter goal outlined by leader Xi Jinping last September to much global fanfare.

Whether China can flatten its carbon emissions in the next decade remains to be seen, and its goal of carbon neutrality by 2060 depends heavily on increasing reliance on renewable energy and nuclear power, as well as major technological advances in areas such as carbon capture-and-storage. At this point, China’s coal dependence threatens both its long-term decarbonization plans and global efforts to limit temperature increases to 1.5-degrees Celsius (2.7 F).

In the short term, the Communist Party’s chief concern remains how to grow the economy by around 6 percent per year. And, as identified in its latest Five-Year Plan, one of the top risks to China’s aim of maintaining a “moderately prosperous society” remains a lack of energy to drive its economy.

“Energy security in the Chinese context primarily means coal,” said Li Shuo, a climate policy advisor at Greenpeace East Asia. “So how do you reconcile these two narratives? I don’t think the plans that have been announced have given us a clear answer.”

Analysts say that a number of actions in the coming decade could signal how serious China is about reducing its CO2 emissions. One is whether the central government sets an absolute—and steadily declining—cap on CO2 emissions, and another is whether Beijing sticks to its pledge to stop setting an explicit five-year GDP target, which has long locked provincial and local governments into a development-first mentality.

Beijing’s central economic planning for the next five years highlights China’s indecision regarding how fast to make its low-carbon shift, Li says. It also sends mixed signals to provincial and lower government officials about whether decarbonization, the economy, or energy security should be the top priority.

Additionally, a struggle is underway between the coal sector and government forces pushing for a more rapid transition away from coal-fired power. In recent months, both the environment ministry and top Communist Party leadership reprimanded the National Energy Agency for approving too much coal-fired power too fast. President Xi delivered a widely publicized speech before the country’s top financial planners on March 16 in which he said the years leading up to 2025 would be critical to ensuring that China’s emissions peak by 2030. Many analysts saw this as a sign that the country’s leadership is unhappy with provincial and local government planners who have approved the increased coal-power rollout.

Despite China’s growing drive to expand wind and solar power, the target for non-fossil fuel sources, including renewables and nuclear energy, as part of the total energy mix is a modest 20 percent over the next five years..

Swithin Lui, an analyst at Climate Action Tracker and the New Climate Institute, said that post-2030, China is betting big on technology solutions to meet its 2060 carbon neutrality goal, including expensive and not yet widely deployable carbon capture-and-storage technology, further expansion of renewables, hydropower, hydrogen fuel cells, and a greater push for nuclear power. “There’s no implementation plan for that,” Liu said of the post-2030 technology solutions gamble. “It’s basically hedging for the future.”

One possibility is that China has lowballed its commitments to decarbonize. It could be dangling continued expansion of coal-fired power plants as a way to extract concessions on the international stage, either directly for assistance to deal with its energy security challenges or for leverage on other geopolitical fronts. These would include trade and technology negotiations with the United States, which if resolved in Beijing’s favor would allow more room to push back domestically against powerful coal and energy interests.

Other negotiating levers could be related to what China considers its non-negotiable core interests, such as Taiwan, Hong Kong, the Tibet and Xinjiang regions, and its claims in the South China Sea. With the Biden administration making climate change a priority and calling it an existential threat, China’s negotiators are likely to push hard on their own concerns, which the Communist Party increasingly mentions as existential threats to its power.

The good news: “For the first time, the idea of green development is everywhere, it is across the board.”

President Xi has left himself ample leeway to meet China’s modest carbon-reduction goals under the Paris Agreement and to make stronger commitments in the next decade. As for the expanded coal-fired power capacity that China has proposed, analysts say there are questions about how much of that will actually move forward, which could give Chinese negotiators more room to commit to larger cuts in CO2 emissions.

“Is this leaving some room for negotiation, given the Glasgow [climate conference in November] and the upcoming engagements with the Biden administration?” asked Lauri Myllyvirta, lead analyst at the Center for Research on Energy and Clean Air.

Despite the near-term commitment to coal power, some China experts say, there are reasons to believe that the country can begin to cut its emissions by the early 2030s. “What is welcoming in the overall plans is that, for the first time, the idea of green development is everywhere, it is across the board,” Zhang said. “This is really the first time that green development has been integrated into the plans in as comprehensive a way as it could be.”

These plans include electricity and energy development guidelines that will contain critical target limits on overall coal consumption and possibly a capacity cap on coal-fired power. And while it is adding overall coal capacity, China’s planners are also phasing out smaller, dirtier, and less efficient coal-fired power plants and replacing them with larger, more efficient plants, Zhang said.

Chinese officials realize that the country’s renewable energy resources are insufficient—and too intermittent—to ease dependence on coal in the near future. Zhang cited recent problems with energy grid failures in Texas as a prime example of what Chinese officials don’t want to see happen in their country.

Moving forward, one key indicator will be whether a forthcoming climate plan from the Ministry of Ecology and Environment will include an absolute, long-term cap on CO2 emissions. If such a cap is adopted, five-year plans from provincial governments will then have to include their own road maps for key carbon-emitting sectors to follow. How stringent those carbon-cutting plans are could indicate how serious China is about reducing carbon emissions as quickly as possible from 2030 onward.