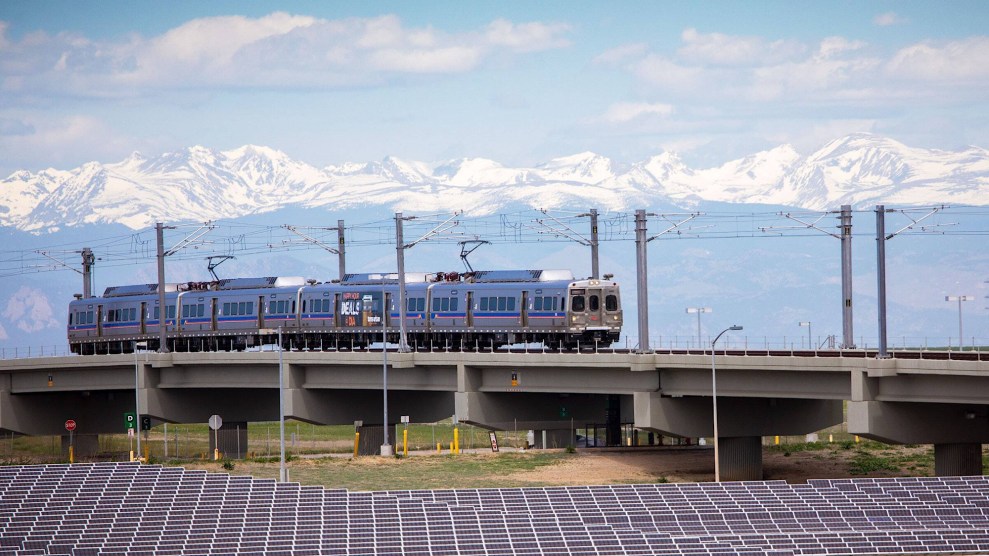 A solar installation at Denver airport.Courtesy of Denver International Airport

THE NEXT TIME you’re staring out a plane window during takeoff or landing, give the airport a scan. You’ll see hangars and other support buildings and, of course, the terminal. But mostly, you’ll see lots of empty space. Airplanes, as many aeronautical engineers have noted, like open spaces—for obvious reasons, including not getting along with trees.

You know what also likes open spaces? Solar panels, which abhor the shade of not only trees but also tall buildings. So why aren’t we covering our airports—dedicated spaces that can’t be used for anything other than the business of air travel—with solar arrays?

But let’s talk about their potential first. New research out of Australia shows how massively effective it would be to solarize 21 airports in that country. Researchers scanned satellite images of the airports for open roof space, where solar panels best avoid shadows, and found a total of 2.61 square kilometers, or 1 square mile, of usable area.

For comparison, they also scanned satellite imagery and found 17,000 residential solar panels in the town of Bendigo, just north of Melbourne in southern Australia. The researchers calculated that the airports could potentially produce 10 times the amount of solar energy as those 17,000 residential panels—enough to power 136,000 homes. Perth Airport alone would generate twice as much as Bendigo. (Perth is very sunny, and the airport has lots of big buildings.) They further calculated that solarizing all 21 airports would reduce greenhouse gas emissions by 152 kilotons a year, the equivalent of pulling 71,000 passenger cars off the road.

It may be cheaper to use ground solar panels, especially if an airport has a lot of space—DEN has 53 square miles.

With their plentiful sunshine, Australians are sitting on the energy equivalent of a gold mine; large swaths of blank rooftop space in airports provide an opportunity to centralize solar energy production. Installing panels house by house is great—and no one is saying we should stop, because we need all the solar power we can get. But commercial panels are bigger and more efficient, so they can generate more power. Plus, residential roofs come in all shapes and sizes, making them more difficult to work with than a commercial roof, which is usually flat.

“Just imagine the labor to install on all the different shapes of residential buildings,” says Royal Melbourne Institute of Technology geospatial scientist Chayn Sun, the corresponding author on the new paper describing the modeling in the Journal of Building Engineering. “Compare that with flat-roof, low-rise airport buildings.”

Solarizing airports could potentially power the airport itself and even export energy. “Not only can they be self sufficient, they may have excess electricity they can send to the grid to supply the surrounding area,” says Sun.

While paneling these roofs may be efficient, it still won’t be easy. In the United States, for instance, the Federal Aviation Administration requires that airport officials prove that their new panels won’t produce glare, firing sunlight into the eyes of pilots and the air traffic controllers in the tower. (That shouldn’t be a problem, thanks to coatings on modern solar panels, but it’s still something officials have to take into account in their planning.) The FAA also wants to be sure that the panels don’t interfere with radar communications at the airport.

Also, mounting panels on existing roofs could require a retrofit, which will add to costs, says Scott Morrisey, senior vice president of sustainability at the Denver International Airport, aka DEN. But when building new structures or expanding terminals, solar capacity can be engineered right into the plan. “The fact that you are designing and integrating solar into that building makes it a lot more cost-effective than going back and trying to retrofit older buildings,” says Morrisey.

For older buildings, it may be cheaper to instead deploy solar panels on the ground, especially if an airport has a lot of space at its disposal, as DEN does—53 square miles of it. (When airport officials commissioned their first array in 2008, it was ground-based.) Still, for urban airports without large swaths of empty real estate, the only real option may be rooftops.

DEN is actually doing both: A recently expanded concourse features a roof-mounted system, with more panels to come in expansions currently underway. All told, the panels will soon cover more than 120 acres, providing 25 to 30 percent of the airport’s annual energy. When conditions are sunny, the facility might even generate all of its power from solar.

That brings us to the intermittent nature of solar power: A snowy winter day in Denver means a drop in the energy harvested from the sun. And once the sun goes down, you lose that power source entirely. So it’s not like DEN can divorce itself from the larger grid. Still, panels can be a complement to an airport’s energy infrastructure, giving it a power boost on a sunny day.

SFO officials are studying where they might locate more panels to build out a self-sufficient “microgrid.”

As battery costs drop, airports will be able to store that energy. San Francisco International Airport’s solar panels currently generate 4.6 megawatts, while its peak demand is 55 megawatts. (In contrast to DEN’s wide open spaces, SFO sits on about 8 square miles.) Officials there are currently studying where they might locate more panels to build out a “microgrid,” or a self-sufficient system that would use solar to charge massive batteries. If there’s a blackout, instead of shifting to generators—like SFO currently does—they could switch to backup batteries to electrify essential facilities.

“We can island and microgrid our buildings and leverage that renewable energy across different periods of the day,” says Erin Cooke, the director of sustainability at SFO. A much smaller airport north of San Francisco, in Humboldt County, is actually already developing its own microgrid to both power itself and send excess energy back to the larger grid. (And airports are not the only spaces researchers think we should coat in solar panels and transform into microgrids; other options include California’s canal system, family farms, affordable housing projects, a casino, your electric car, and even satellites in space.)

Still, investing in solar panels and batteries will set an airport back financially. Their deployment, then, has to make business sense, or a government would have to step in to fund a project. The costs of renewables, though, are falling constantly. “We really feel like we’ve cracked the nut here, in terms of how we can do this in a way that we can put more solar into the system to power the airport, but do it in a really cost-effective way as well,” says Morrisey.

So panel by panel, some airports are indeed taking advantage of their cleared space to generate solar power. See for yourself the next time you’re waiting for takeoff.