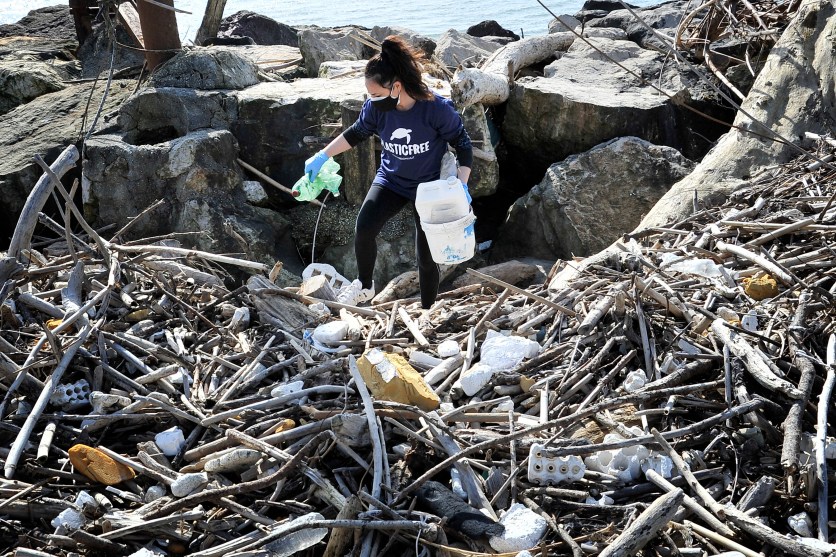 Volunteers work to clean up what has become known as "Plastic Beach" in Caserta, Italy. Vincenzo Izzo/LightRocket/Getty

In Europe, beachgoers have grown accustomed to the dispiriting sight of plastic garbage strewn along shorelines. Indeed, 85 percent of the continent’s saltwater beaches and seas exceed pollution standards on marine litter. The Mediterranean Sea is the most defiled of all, with researchers collecting an average of 274 pieces of plastic refuse per 100 meters of shoreline. And beneath the waves, microplastics have turned coastal waters into toxic “plastic soups.”

In an all-out push to clean up Europe’s beaches—one plank in the European Union’s trailblazing efforts to address the almost 28 million U.S. tons of plastic waste it generates annually—a ban comes into effect July 3 that halts the sale in EU markets of the 10 plastic products that most commonly wash up on the continent’s shores. These include, among other items, plastic bottle caps, cutlery, straws and plates, as well as Styrofoam food and beverage containers.

The ban is the most visible sign of Europe’s efforts to curtail plastics pollution by creating the world’s first-ever circular plastics regime. By the end of this decade, this will lead to a ban on throwaway plastics, the creation of a comprehensive reuse system for all other plastics, and the establishment of an expansive and potentially lucrative European market for recycled plastics.

A raft of EU measures is now driving investments and innovation toward circular solutions that, according to experts and EU officials, will come to define Europe’s low-carbon economy and enhance its global competitiveness. A circular economy is one in which products and materials are kept in use along their entire life cycle, from design and manufacturing to reuse or recycling. In contrast to the current, linear system, products don’t end up in the rubbish bin, but rather are reintroduced into the production process.

“The EU is taking the creation of a circular economy very seriously, and plastics are at the center of it.”

Under the EU Plastics Strategy, put forward in 2018, waste guidelines will overhaul the way plastic products are designed, used and recycled. All plastic packaging on the EU market must be recyclable by 2030, and the use of microplastics circumscribed.

The measures are the toughest in the world and have already pushed plastic packaging recycling rates in the EU to an all-time high of 41.5 percent — three times that of the United States. The EU has set a target for recycling 50 percent of plastic packaging by 2025, a goal that now looks within reach. And in 2025, a separate collection target of 77 percent will be in place for plastic bottles, increasing to 90 percent by 2029.

This overarching regime will rely on the widespread adoption of extended producer responsibility schemes, which means that if a company introduces packaging or packaged goods into a country’s market, that firm remains responsible for the full cost of the collection, transportation, recycling or incineration of its products. In effect, the polluter pays.

And as of this year, EU companies may no longer unload plastic waste on countries in the developing world such as Malaysia, Vietnam, India and Indonesia. By exporting plastic waste, the EU had essentially been fobbing off the scourge—about 1.7 million tons of it a year—a sizeable quantity of which was burned in the open air, dumped in landfills, or simply tossed into the sea. Now, Europe is forced to tackle the entirety of the waste burden itself.

“The EU is taking the creation of a circular economy very seriously, and plastics are at the center of it,” said Henning Wilts, director of circular economy at Germany’s Wuppertal Institute for Climate, Environment and Energy.

Elsewhere in the world, governments and the private sector are responding to public ire about plastic pollution, though with much less effect than in Europe. Worldwide, only 14 to 18 percent of plastics are recycled (less than half the European average), and less than 10 percent are recycled in the U.S. According to Greenpeace, although many governments and multinational companies boast high-profile pledges to make their products more circular, much of it is greenwashing.

“Many types of commonly used plastic packaging are not recyclable, and are being landfilled, incinerated, or exported without verification of recycling,” according to a Greenpeace report.

The U.S., which generates the largest amount of plastic waste in the world, is awash in waste now that China—the largest manufacturer of plastic — no longer accepts imported waste; many U.S. cities end up pitching plastic waste into landfills or burning it. Congress has commissioned the National Academies of Sciences to conduct a sweeping review of the U.S. contribution to plastic waste, due out at the end of this year.

Europe’s battle against plastic waste will help the EU reach its ambitious climate target of slashing greenhouse emissions by 55 percent below 1990 levels by 2030. The EU estimates that the drop in oil-based plastics production could shave 3.4 million tons of CO2-equivalent off Europe’s carbon footprint and pre-empt environmental damages that would run to 22 billion euros by 2030.

“The 10-items ban is big. It’s not greenwashing,” said Clara Löw, an analyst at the Öko-Institute, a German think tank. “There are many more measures afoot within the European Green Deal to rein in plastics and establish circularity as the cornerstone principle of Europe’s plastics economy. Even most Europeans aren’t aware of how much is happening right now.”

Critics note, however, that the EU’s showy 10-item ban covers just one percent of Europe’s plastic production. They also point out that the total quantity of plastic waste generation in Europe has not fallen — something the new measures aim to reverse.

Zero Waste Europe says that plastic waste generation in Europe will drop only when sanctions like the 10-items ban and other measures take full effect.

Carmine Trecroci, an economist and recycling expert at the University of Brescia in Italy, said that external factors like the price of oil have a major impact; as long as oil is cheap, which it has been in recent years, so too is plastics production, making it all the harder to rein in. The plastics sector in the EU is big business, employing 1.5 million people and generating 350 billion euros in 2019. Trecroci said the powerful Italian plastics lobby fought fiercely to block the 10-item ban, and then to slow and dilute it. In the end, however, the EU approved the ban.

While EU countries still produce large quantities of plastic, the amount of post-consumer plastic waste sent to recycling has soared by 92 percent since 2006, according to PlasticsEurope, a European association of plastics manufacturers. Meanwhile, landfilling—by far the dirtiest waste treatment option — has fallen by 54 percent.

Since January 1 plastic producers in the EU have had to pay a levy of 800 euros per metric ton of non-recycled plastic packaging waste. Pressure from Brussels has also resulted in voluntary measures in the private sector: Coca-Cola Europe, for example, is well on its way to manufacturing 50 percent of its plastic bottles and cans from recycled content.

According to EU, only 5 percent of plastic packaging’s value currently remains in the economy after first use. This, it estimates, costs the European economy between 70 and 105 billion euros a year.

“A closed loop,” Löw said, “is when every material, every product and its components will be used as long as possible, repaired or refurbished if broken, [and] recycled into secondary raw material several times without losing material quality.”

Wilts of the Wuppertal Institute added, “Europe is a continent with few raw materials, like oil and metals, so a recycling industry that circumvents the need for virgin raw materials is an industrial strategy as much as an environmental program.” He and others say that recycling and recovery facilities will propel recycling in Europe as plastic waste becomes more valuable, waste-to-energy incineration is properly taxed, and more products are standardized for recyclability. “There’s going to be a doubling of sorting and recycling facilities in the next five years,” Wilts said.

A mandatory minimum on the amount of recycled plastic in bottles adds value to waste, as producers need plastic and will pay for it.

Europe’s new plastics economy dates back to the mid-1990s, when the principle of extended producer responsibility was enshrined in EU law. Extended producer responsibility (EPR), argues a Zero Waste Europe paper, is “crucial to incentivize the redesign of products with circularity in mind … Ensuring producers bear 100 percent of the cleanup costs will encourage the manufacturer to work with municipalities to ensure high collection of their products.”

Trecroci notes that EPR on a significant scale is already a reality in Northern and Central Europe. In Germany, companies pay fees totaling 1.5 billion euros a year that finance the transport, sorting and recycling of their waste end-materials. “In southern Europe, we’re at an earlier stage, but EPR will apply here, too, in full, in a few years’ time,” Trecroci said.

Also, in 2019 the EU adopted a directive that by 2025 all EU countries integrate 25 percent recycled plastic in clear plastic bottles and 30 percent in all plastic beverage bottles by 2030. This mandatory minimum—already in force in Germany, Denmark and Norway—adds value to plastic waste, since plastic producers need it and will pay for it.

“This creates a demand for high-quality recycling material,” Wilts said. Soon, the same principle—minimum amounts of recycling content—will apply to the automotive and building sectors, he said.

The extensive private sector network needed to create this new circular economy is only now gaining momentum, according to Wilts. “Eventually, the recycling industry is going to produce the basic materials for industrial manufacturing,” he said. “But we’re not quite there yet.”