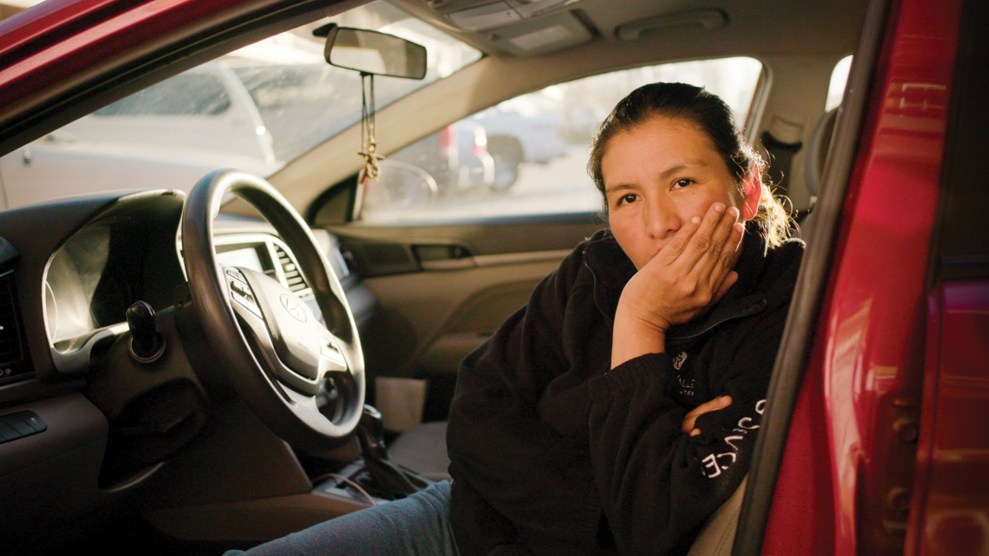 Alma Alvarez and her three children were among the first families to move into the Redwood Inn.Film still by Brandon Yadegari Moreno

Deep in the densely forested foothills of southern Oregon, near the town of Butte Falls, Lanette and Steve Martin lived with their son and his family—until last year, when a wildfire chased them away from their home. As embers the size of charcoal briquettes landed on their front deck, the retired couple and their family jumped into their cars, leaving behind five chickens and a cat. “If we’d waited another 10 minutes, we would have been engulfed in flames,” Steve Martin said.

That same day, September 8, 2020, an urban fire fueled by hot, dry weather and strong winds tore through the nearby towns of Talent and Phoenix, in the Rogue Valley. Alma Alvarez, a migrant worker, was working about 15 miles away when the fire began raging toward Phoenix, where her two younger children, aged 10 and 13, were home alone. Alvarez rushed back to find the neighborhood already in flames. The family escaped with the kids’ birth certificates and their cat, but everything else was gone. That night, they slept in their car. “All we would think about was the fire and if it could come get us in our sleep,” Alvarez said recently, speaking in Spanish. The next night, they checked into a hotel, the first of many where they would stay over the months to come.

The conflagrations, part of what were later labeled the Labor Day fires, killed three people and displaced roughly 8,000 in southern Oregon’s Jackson County. In mid-April, after bouncing between temporary homes for more than seven months, both Alvarez’s family and the Martins finally landed in the same place: the Redwood Inn in Medford, Oregon. This was no coincidence. The motel is part of Project Turnkey, a $65 million statewide initiative to convert hotels and motels into free housing for survivors of the September 2020 fires as well as other people experiencing homelessness. For Alvarez and the Martins, Project Turnkey offered much-needed stability—and a step toward a more permanent home.

Situated on a busy street lined with inexpensive motels, the Redwood Inn is one of as many as 20 motels that Oregon plans to buy by the end of June. Collectively, they could shelter up to 1,000 households. Project Turnkey is modeled on a similar program in California that began last summer. Cities and nonprofits have long rented hotel rooms for unhoused people, but states actually buying hotels is something new, triggered by the COVID-19 pandemic and the need for socially distanced shelters. Ernesto Fonseca, who leads Hacienda Community Development Corporation, an Oregon housing organization that serves Latino communities, said supporting Project Turnkey was a “no-brainer”; it’s a relatively quick and cheap way to provide emergency shelter and housing. “(But) it’s also not a permanent solution,” he said.

The state is putting up the money to buy the buildings, but local organizations have to run them—and cobble together the funds to do so. Rogue Retreat, a nonprofit, and the city of Medford received $2.55 million to buy the 47-unit Redwood Inn, which is prioritizing wildfire survivors. Later, the motel will house members of the general homeless population, who will pay a small rent. But for now, local and state grants, along with Federal Emergency Management Agency reimbursements, are paying the Redwood Inn’s estimated $91,000 monthly operational cost.

When the Martins pulled into the motel’s parking lot on April 12, they let out a sigh of relief. As a handful of new residents lingered outside, ready to move in, the Martins explained that their move-in date had been repeatedly delayed. Just that morning, the state had informed them that they could have one of the first eight rooms that were ready.

Inside the seating area of a makeshift lobby, Rogue Retreat staff members told them about a program that can connect residents with permanent housing, while emphasizing that there’s no time limit on their motel stay. Steve Martin seemed on the verge of tears as he signed the paperwork: “Our next option was the back of my pickup,” he told the staff.

The couple passed around a phone with pictures of their former home, a four-bedroom house that held them and their son’s family of three. Lanette Martin called it her “Shangri-La.” For five years, they were caretakers of the 40-acre property, where their power came from solar panels and their water came from mountain springs. In exchange, the Martins—who live on a fixed income—paid just $700 per month in rent. Now, the couple can’t find even a studio apartment for that price: In 2020, rents and home values skyrocketed amid high demand driven by the fires and an influx of out-of-state arrivals during the pandemic. The Martins lived in several friends’ homes after the fires, but had to leave the latest one when it sold in less than 24 hours—a typical occurrence nowadays in Jackson County, where Medford is located.

From 2013 to 2017, nearly a third of Jackson County residents were severely rent-burdened, spending more than 50 percent of their monthly income on rent, according to Oregon Housing and Community Services. And that was before the September 2020 wildfires exacerbated the county’s already acute affordable housing shortage. Of the nearly 2,500 homes destroyed in Jackson County, 60 percent were mobile homes.

The Martins lacked renters’ insurance and hadn’t applied for FEMA assistance. Their son’s family, however, now lives in a FEMA trailer, one of about a hundred Jackson County households the agency is housing; another hundred are on its waitlist. The state is providing hotel rooms and RVs to an additional 765 Jackson County fire survivors.

As the Martins sorted their few belongings into their room at the Redwood Inn, their 7-year-old dog, Keyeva, stretched out on the bed. Keyeva had made it out of the fire, but the Martins’ five chickens died in their coop, and their cat was nowhere to be found. Living in the Redwood Inn rent-free means they can save up for a down payment on a house, the Martins explained. “We’re not looking for a handout,” Steve Martin said. “We’re just looking for a hand.”

A few days later, the aroma of pork tacos and homemade salsa filled the air of an upstairs motel room at the Redwood Inn. Alvarez and her family were taking advantage of their room’s kitchenette; Rogue Retreat had spent extra time preparing units that already had kitchenettes to accommodate people with specific dietary or medical needs. Lanette Martin has Type 2 diabetes, and two of Alvarez’s three children have hemophilia, a bleeding disorder.

After they moved in, one of Alvarez’s first tasks was to give her 10-year-old son, Anthony Gonzalez, the weekly injection that helps his blood clot properly. Alvarez and her children moved from California to Oregon last year, drawn by the state’s good public schools and booming hemp industry. But the wildfires burned many of the region’s farms, and Alvarez has had trouble finding jobs trimming hemp.

“We can’t allow for people to be sleeping in their cars right after a disaster… You still have to go to your job the next day. Your kids have to go to school.”

According to the Oregon Climate Change Research Institute’s 2021 report, wildfires in the state are expected to become more intense and frequent. Fires tend to have the greatest impact on marginalized communities, whose members are often left with few resources following climate-related disasters, said Alessandra de la Torre, a staff member at Rogue Climate, a southern Oregon climate justice organization. The group helps run a wildfire relief mutual aid facility that, seven months after the fires, was still supplying food and clothes to about 300 people a week. “We can’t allow for people to be sleeping in their cars right after a disaster or an emergency,” she said. “Because, at the end of the day, you still have to go to your job the next day. Your kids have to go to school.”

Sinking into their new beds in the Redwood Inn, Alvarez’s two younger children eagerly asked their mom and 22-year-old brother, Diego Gonzalez, about school—when they could start going, and whether it would be in-person or virtual. They also asked if they could walk or take the bus to get there, since their mom and brother needed to work. Instead, while the family figured out transportation, the kids spent their first days in the motel watching TV, playing video games and tending to their cat, Biscuit. “They don’t go out anywhere,” Alvarez said. “They’re locked up.” Now, most weekdays the kids wait outside for a bus to take them to school.

Meanwhile, Alvarez, after finally landing one of the few remaining local hemp jobs, returns to the motel each evening, exhausted from working 10-hour days to save up for a small rental house or apartment. Squirming on the edge of one motel bed, Alvarez’s 13-year-old daughter, Alma Gonzalez, said she hopes to one day have a room of her own, and a dog. Anthony Gonzalez said he wants a backyard to run around in. “We just want to be kids,” his sister added.

But for now, the family crowds together in the Redwood Inn. “Hopefully,” said Diego Gonzalez, “from here, it’s not much farther until we can have a home.”