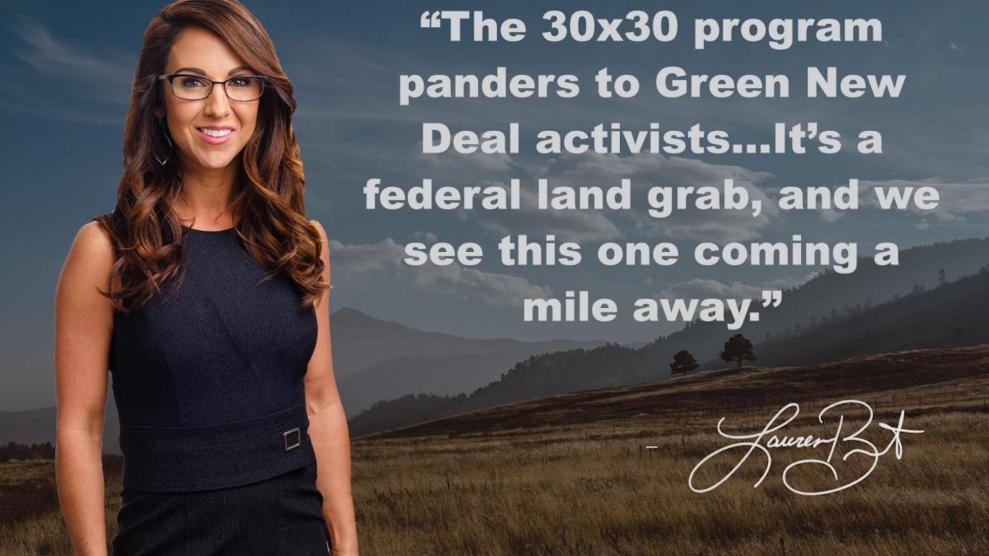 Farmers, sharpen your pitchforks: President Joe Biden is coming for your land.

At least, that is, according to Fox News, various Republican politicians, and the farm trade press. The outrage centers on an executive order Biden issued on Jan. 27, laying out the broad aim of “tackling the climate crisis at home and abroad.” As part of the effort, the order stated the goal of “conserving at least 30 percent of our lands and waters by 2030.” Ever since, the battle to nix “30 for 30″—shorthand for the executive order—has emerged as a cause celebré in GOP circles.

A group of scientists argue that to mitigate climate change and slow the extinction crisis, 30 percent of the globe’s land would have to be protected.

A Texas-based group called the American Stewards of Liberty recently launched a campaign to “fight the radical environmental agenda from taking 30 percent of America’s land by 2030,” citing a Biden-hatched scheme to transform the United States from a “nation founded on private property principles to one controlled by the administrative state.”

On June 8, in the weekly column he publishes on his website, Nebraska Gov. Pete Ricketts echoed these claims, urging his constituents to join his effort to thwart Biden’s “land grab,” a plan he says would “have major consequences for private property rights.” Back in April, Ricketts joined 14 other Republican governors in penning a letter to Biden declaring their objections to the president’s purported land designs. On Twitter, Texas Gov. Greg Abbott posted a copy of the missive, adding for good measure that “the President has no authority to dictate to states or citizens what to do with their private property.”

I joined Governors around the U.S. in standing against Biden's radical 30×30 plan.

The President has no authority to dictate to states or citizens what to do with their private property.

Biden also fielded a March letter from the conservative Congressional & Senate Western Caucuses, lambasting the supposed initiative as one that will “undermine private property rights” and “lock up more land.” Its 64 signors ranged from hard line right-wingers like Rep. Lauren Boebert (R.-Colo.) and Rep. Paul Gosar (R.-Ariz.) to relative moderates Sen. Mitt Romney (R.-Utah) and Lisa Murkowski (R.-Alaska). In May, Boebert filed a bill—co-sponsored by 22 House colleagues—to scuttle the alleged plot, which she called a “massive land grab being pursued by the Biden administration at the behest of extremist environmentalists.”

One problem: there’s no evidence whatsoever that the federal government plans to seize land from anyone.

Now, the conservative critics are correct that the “30 by 30” target emerges from environmentalist thought. Edward O. Wilson’s 2017 book Half Earth galvanized the notion, and it gained traction in 2018 when Swiss philanthropist and billionaire Hansjörg Wyss pledged $1 billion over ten years to expand global land conservation. In an influential 2019 Science paper, a group of mostly US researchers upped the momentum, arguing that to mitigate climate change and slow the extinction crisis, 30 percent of the globe’s land would have to be protected. Groups like Nature Conservancy, the World Wildlife Fund, and National Geographic, all on the corporate-friendly end of the environmentalist spectrum, have endorsed 30 by 30. At the G-7 meeting meeting in Cornwall, UK, on June 13, Biden reiterated his commitment to the goal, joining the leaders of Canada, France, Germany, Italy, Japan, and the United Kingdom in pledging to support “targets to conserve or protect at least 30 percent of global land and at least 30 percent of the global ocean by 2030.”

It’s also true that the definition of “protected” is hazy in the world of environmental policy. According to the International Union for the Conservation of Nature, it can mean everything from a “strict nature preserve” to an “area with sustainable use of natural resources.” So a forest cut off from human contact would meet the definition; and so could a farm managed so that it doesn’t, say, overuse or foul water.

Moreover, the Biden plan’s 30 percent target is undeniably ambitious. A 2018 Center for American Progress study found that just 12 percent US land area is currently managed as national parks, wilderness areas, permanent conservation easements, state parks, national wildlife refuges, national monuments, or other protected areas. Ricketts isn’t wrong when he writes that the plan would encompass a “land area the size of the State of Nebraska every year, each year, for the next nine years, or in other words a landmass twice the size of Texas by 2030.”

But the Biden administration has made clear from the start that it plans to pursue the goal not through land seizure, but rather through voluntary conservation programs that would compensate landowners who participate. US Agriculture Secretary Tom Vilsack, whose department will help oversee the process, has tried mightily to quell the fears being whipped up in conservative circles. “There’s no intention to take something away from folks,” he told agriculture press reporters in April. “It’s really designed to figure out creative and innovative ways to encourage folks to participate in what I think many farmers and ranchers are already doing, and may very well be inclined to do more, if the right set of incentives are in place.”

On May 6, amid an ongoing swirl of conservative criticism of the executive order, the administration released a document called “America the Beautiful” intended to answer the complaints. The paper restates that 30 by 30 goal, but pledges to “honor private property rights and support the voluntary stewardship efforts of private landowners and fishers.” Driving the point home, the word “voluntary” appears 18 times in the 23-page text. And while it doesn’t spell out the definition of “protected,” the piece makes clear that working farms that adopt or already utilize (as yet undefined) conservation practices can be included under the definition.

Now, there are legitimate concerns around big land-protection efforts. “In many instances, governments established protected areas through violent removal and policing,” Laura Martin, an assistant professor of environmental studies at Williams College and author of the forthcoming book Wild by Design: The Rise of Ecological Restoration, wrote in May. But the people being dispossessed weren’t the sort of landholders the American Stewards of Liberty or Greg Abbott have in mind. “The US military created the nation’s first national park, Yellowstone, by forcibly removing Nez Perce, Bannock, Shoshone, Crow, and Blackfeet communities from their ancestral lands.” She also noted that at a 2004 United Nations meeting, an Indigenous delegate warned that “conservation, not extractive industries, was the biggest threat to indigenous territorial and human rights.” A new Oakland Institute report documents just such a threat pending in Tanzania, where the government plans to evict over 80,000 Indigenous Maasai people from their land in an area targeted for protection.

The Biden team overseeing the 30 for 30 effort—which includes US Interior Secretary Deb Haaland, the first Native American to hold that position—appears intent on avoiding these pitfalls. The “America the Beautiful” document acknowledges that “For well over a century, the US Government waged war against Native peoples, taking their lands, killing their sacred wildlife, implementing brutal assimilation policies, and making and breaking promises.” And it pledges to “honor tribal sovereignty and support the priorities of tribal Nations.” As Martin puts it, Biden’s 30 by 30 plan “emphasizes conservation and restoration—to be led by locally designed conservation efforts and the priorities of Tribal Nations—over the establishment of strict protected areas.”

Yet the Biden plan’s right wing critics are falsely asserting that some jackbooted land seizure is afoot. Nebraska Gov. Rickett has been been barnstorming the state to whip up opposition to it. At a Stop 30 for 30 stop in Alliance, Nebraska on June 8, Ricketts denounced the “radical climate agenda” embedded in Biden’s “land grab.” One audience member sniffed a nefarious plot, the local Star-Herald reported: “I know exactly how they are going to do it… They are going to raise our taxes to the point that you can’t pay it so they can take it.” Ricketts concurred: “Actually, I think one of the implications of this is that they will raise our taxes.”

The spectacle of a governor shamelessly using his platform to hype up a phantom threat reminds me of my colleague Tim Murphy’s piece on the GOP’s transformation into a “party of shitposters.” Murphy writes: “Increasingly, as world-­historical crises unfurl all around them—often exacerbated by their own policies and actions—the GOP’s most ambitious officials view their primary responsibility less as public servants than as content creators, churning out an endless stream of takes, memes, stunts, and podcasts.”

Ricketts wants in on that action. While an increasingly severe drought settles in on the Nebraska’s farmers, their climate change-denying governor diverts their gaze to Biden’s imaginary land grab. On June 15, he took to Twitter to boast that another Nebraska county had joined more than 20 others in heeding his urge to pass Stop 30×30 resolutions.

Contact your county commissioners today and urge them to step up and make their voices heard. pic.twitter.com/eTCk7Iv36Y