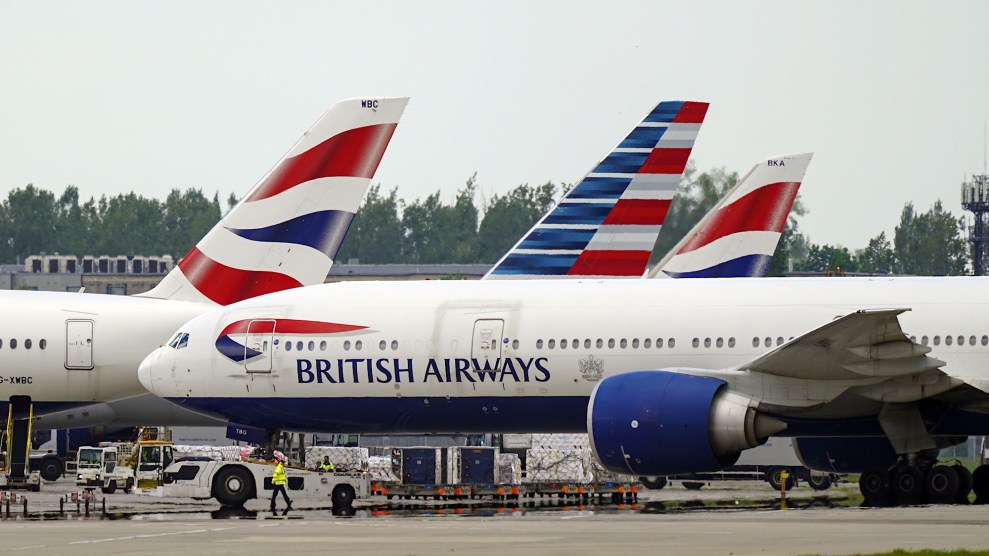 This story was originally published by the Guardian and reproduced here as part of the Climate Desk collaboration.

The nations that make up the G7 have pumped billions of dollars more into fossil fuels than they have into clean energy since the COVID-19 pandemic, despite their promises of a green recovery.

As the UK prepares to host the G7 summit, new analysis reveals that the countries attending committed $189 billion to support oil, coal and gas between January 2020 and March 2021. In comparison, the same countries—the UK, US, Canada, Italy, France, Germany and Japan—spent $147 billion on clean forms of energy.

The support for fossil fuels from seven of the world’s richest nations included measures to remove or downgrade environmental regulations as well as direct funding of oil, gas, and coal.

The G7 nations represent one-tenth of the world’s population, but almost a quarter of its carbon dioxide emissions.

The analysis from the development charity Tearfund, the International Institute for Sustainable Development,and the Overseas Development Institute showed that the nations missed opportunities to make their response to the pandemic greener. In most cases, money provided for fossil fuel industries was given with no strings attached, rather than with conditions requiring a reduction in emissions or pollution. The analysis found that eight in every 10 dollars spent on nonrenewable energy came without conditions.

This included lifelines that were thrown to the aviation and car industries, which received $115 billion from the G7 countries. Of that money, 80 percent was given with no attempt to force the sectors to cut their emissions in return for the support.

Only one in every 10 dollars committed to the COVID-19 response benefited the “cleanest” energies such as renewables and energy efficiency measures.

The UK prime minister, Boris Johnson, will open the G7 summit in Cornwall on June 11. He has said he wants to unite the nations to “build back better” from the coronavirus pandemic to create a greener, more prosperous future. As well as the G7, the UK has invited South Africa, Australia, India, and South Korea to take part.

The analysis of the actions of the seven major western economies in the last 15 months reveals they are not yet investing at sufficient scale in technologies that support fast decarbonization of their economies, and they have not created green jobs at scale in response to COVID-19.

The government bailed out highly polluting industries without pressuring them to “go green.”

Paul Cook, the head of advocacy at Tearfund, which operates in some of the poorest countries in the world most affected by global heating, said: “Every day, we witness the worsening consequences of the climate crisis for communities around the world—farmers’ crops failing; floods and fires engulfing towns and villages; families facing an uncertain future. “Choices made now by the G7 countries will either accelerate the transition towards a climate-safe future for all, or jeopardize efforts to date to tackle the climate crisis.”

The G7 countries are among the most polluting in the world. They represent one-tenth of the world’s population but are responsible for almost a quarter of CO2 emissions. “Their actions can set the scene for success or failure at the UN climate talks being hosted by the UK in November,” Cook said.

During the COVID-19 pandemic, unprecedented amounts of public money were spent by nations; it is estimated that the 50 largest world economies committed at least $14.6 trillion to fiscal stimulus measures in 2020. The authors said that well-designed and targeted stimuli could be used as a springboard for launching low-carbon societies.

The greatest support given by G7 countries was to transport. Bailouts were given to companies including Air France, British Airways, Ryanair, easyJet, Lufthansa, Japan Airlines, Alitalia, Renault and Honda. The financial support would end up sustaining highly polluting industries for decades to come, with very little pressure to “go green,” the authors said.

Since the bailouts, some G7 countries have increased their commitments to cleaner energy, including rail and electric vehicles. But the report said: “Investments in the transport sector remain significantly skewed towards fossil fuels and are at odds with G7 commitments to build back better.”

The propping up of the oil and gas sectors was particularly evident in Canada and the US, both major oil and gas producers. As well as direct support, both countries rolled back environmental regulations on fossil fuel companies.

Some G7 nations made positive steps towards halting support for dirty industries. In February, Italy extended a ban until September this year on fossil fuel drilling. The UK and France brought in policies designed to end international support for fossil fuels. The UK has also announced a ban on new petrol and diesel cars by 2030. “These actions should serve as a precedent for other G7 countries,” the report said.

This month, in the first comprehensive study of the journey to net zero, the International Energy Agency (IEA) said that pledges by governments, even if fully achieved, fell well short of what was required to bring global energy-related CO2 emissions down to net zero by 2050 and give the world an even chance of limiting the global temperature rise to 1.5 Celsius above pre-industrial levels, as the Paris agreement states.