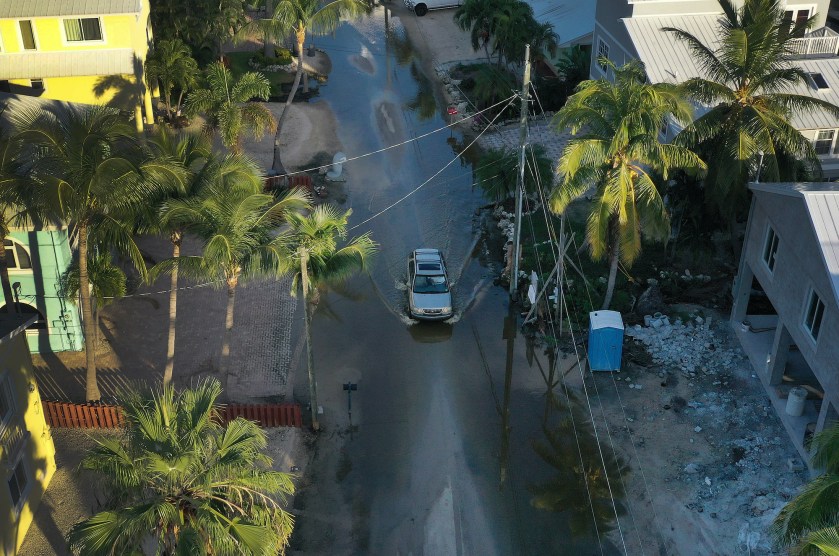 Long famed for its spectacular fishing, sprawling coral reefs and literary residents such as Ernest Hemingway, the Florida Keys is now acknowledging a previously unthinkable reality: it faces being overwhelmed by the rising seas and not every home can be saved.

Following a grueling seven-hour public meeting on Monday, held in the appropriately named city of Marathon, officials agreed to push ahead with a plan to elevate streets throughout the Keys to keep them from perpetual flooding, while admitting they do not have the money to do so.

The string of coral cay islands that unspool from the southern tip of Florida finds itself on the frontline of the climate crisis, forcing unenviable choices upon a place that styles itself as sunshine-drenched idyll. The lives of Keys residents—a mixture of wealthy, older white people, the one in four who are Hispanic or Latino, and those struggling in poverty—face being upended.

If the funding isn’t found, the Keys will become one of the first places in the US—and certainly not the last—to inform residents that certain areas will have to be surrendered to the oncoming tides.

“People don’t have a concept of what sea level rise will do to them. They just can’t conceive it.”

“The water is coming and we can’t stop it,” said Michelle Coldiron, mayor of Monroe county, which encompasses the Keys. “Some homes will have to be elevated, some will have to be bought out. It’s very difficult to have these conversations with homeowners, because this is where they live. It can get very emotional.”

Once people are unable to secure mortgages and insurance for soaked homes, the Keys will cease to be a livable place long before it’s fully underwater, according to Harold Wanless, a geographer at the University of Miami. “People don’t have a concept of what sea level rise will do to them. They just can’t conceive it,” he said.

On Monday, the county gave details of its plan to spend $1.8 billion over the next 25 years to raise 150 miles of roads in the Keys, deploying a mixture of new drains, pump stations and vegetation to prevent the streets becoming inundated with seawater. The heightened roadways are eagerly anticipated by residents who told the meeting of cars being ruined by the salt water and of donning boots to wade to front doors.

“The roads are shot, they’re full of cracks, the water is permeating up,” said Kimberly Sikora, who lives in a vulnerable neighborhood of Key Largo called Stillwright Point that is still awaiting a full road elevation proposal. “I’m just looking for some kind of relief.”

Another resident, Robert Schaller of Twin Lakes, an area further along in the planning process, muttered that he “should’ve done my due diligence” when buying his house last year. “I literally stand on my balcony and watch the water come up through my street,” he said. “It’s coming up right through the pavement.”

But Monroe county’s budget will not cover the raising of all the roads, nor any mass buyout of homes, and an appeal to Florida state lawmakers to levy a new tax to cover these mounting costs has been rebuffed. Further costs will pile up as the county grapples with how—and who pays – to keep critical infrastructure such as sewers and power substations, as well as people’s homes, from being flooded along with the roads.

“If we can’t raise additional money then we will have to look at prioritizing,” said Rhonda Haag, Monroe county’s chief resilience officer. “For example, should we spend money on raising roads if people aren’t paying to raise their yards? We are blazing trails here. We are ahead of everyone in having to think about this.”

The pancake-flat Keys are in jeopardy from rising seas that are, as a National Oceanic and Atmospheric Administration (NOAA) scientist told the county commissioners in the Monday meeting, accelerating upwards as the vast ice sheets of Greenland and Antarctica melt away. Human-caused global heating means an extra 17in of sea level rise by 2040, according to an intermediate NOAA projection used by the county.

Human-caused global heating means an extra 17in of sea level rise by 2040.

Compounding this problem, the islands’ porous limestone allows the rising seawater to bubble up from below, meaning it just takes high tides on sunny days to turn roads into ponds, while global heating is also spurring fiercer hurricanes that can occasionally crunch into the archipelago.

“The Florida Keys are one of the most vulnerable places to flooding in North America,” said Kristina Hill, an environmental planner at the University of California, Berkeley, who warned that the islands would face growing road and pipe maintenance costs, more pollution leaks and harmful algal blooms.

“Without a change in strategy, parts of the Keys will become accessible only by boat,” said Hill, adding that the islands could have to resort to floating structures and navigable canals to remain viable. “The islands will gradually disappear into a higher ocean, potentially leaving a ruined landscape of leaky underground storage tanks, old pipes, and flooded road segments behind to pollute the water.”

The threats faced by the Keys are shrugged off by some of its wealthy retirees who view the situation with a certain fatalism, while others in this Republican-voting bastion openly question the science. Eddie Martinez, one of the county’s five elected commissioners, challenged the NOAA scientist, William Sweet, on his sea level rise projections on Monday.

The sea level rise to date is “really a nothing number”, said Martinez, who told Sweet: “You’re a little bit more on this CO2 side, I’m more on the actual measurement side.” Another commissioner, David Rice, said that “predicting the future is probably best done with a crystal ball” and speculated that global temperatures could change following several volcanic eruptions.

“There are people who don’t want to sell because they love it here, others who want to get out while they can, and those in complete denial.”

“There are people who don’t want to sell because they love it here, others who want to get out while they can, and those in complete denial who call you a troublemaker who is driving down property values by talking about it,” said George Smyth, a retiree who moved to Key Largo a decade ago for the quiet, slow-paced lifestyle. In 2019, his neighborhood spent 90 days partially submerged in water.

The nature of the Keys has changed in this time. While the islands still include pockets of poverty, an influx of affluent second-home owners has caused new properties to sprout up around Smyth. “It used to be pretty rough and tumble, you’d see a few fights on a Saturday night,” he said. “Now everyone looks like they’ve just come from the cosmetic dentist.”

Other new realities are more laborious—Smyth has to wash his car continually to rid it of salt water and has to pay for trucks to unload piles of crushed-up rocks around his property as a buffer against the encroaching tides. While Smyth doesn’t class himself as particularly wealthy, these protections are beyond the means of low-income Keys residents, many of whom live in exposed mobile homes dotted along the islands.

Smyth fears that the county will require poorer residents to stump up the money for the roads, rather than put a levy on the tourists that flock to the Keys. “We feel we are being held hostage,” he said. “I feel sorrow for what is coming and the loss of what is a wonderful community.”

But the mayor defiantly insists the Keys can be saved, even if it is currently unclear how. “We know we live in paradise and we want to keep it that way,” said Coldiron.