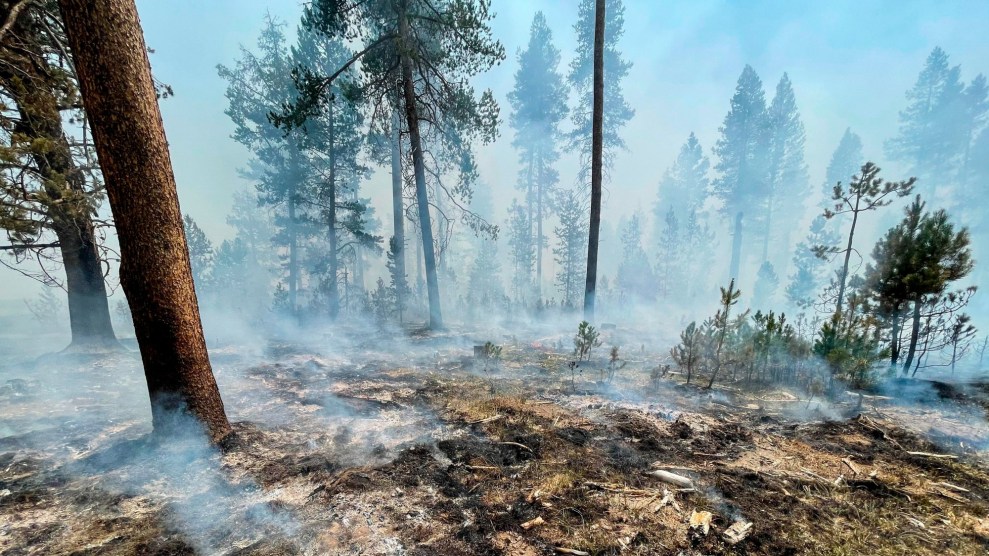 This story was originally published by the Guardian and is reproduced here as a part of the Climate Desk collaboration.

The Bootleg fire stampeded through southern Oregon so fiercely that it spit up thunderclouds. But when the flames approached the Sycan Marsh Preserve, a 30,000-acre wetland thick with ponderosa pines, something incredible happened. The flames weakened and the fire slowed down, allowing firefighters to move in and steer the blaze away from a critical research station.

That land belongs to the Nature Conservancy, an environmental nonprofit that has worked with the local Klamath Tribes to bring back pre-colonial forest management techniques such as prescribed fire—small, controlled burns that clear out fire-fueling vegetation, renew the soil and prevent bigger, runaway blazes.

Pete Caligiuri, the group’s forest program director, credits those efforts with saving the research center, suggesting that the ancient forest management tools can have a dramatic impact.

“That’s exactly what we had hypothesized and hoped would happen,” said Caligiuri. “The research station is completely unimpacted, unharmed by the fire—the fire moved all the way around it.”

A similar phenomenon occurred in the Black Hills Ecosystem Restoration Project, another area where the Klamath Tribes had worked with the US Forest Service to thin young trees and apply prescribed burning. When the Bootleg fire finally swept through, the forest was far less damaged than other areas that were not treated, the forest service said, noting that deer were even seen grazing on a “green island” preserved by the treatment.

After years resisting fighting fire with fire, state and federal agencies are increasingly embracing the strategy.

The weeks-long battle against the Bootleg fire, one of the largest burning in the US, has offered new evidence that Indigenous land management techniques and prescribed burns can change how megafires behave. Tribal experts and ecologists told the Guardian that, with enough investment, the application of “good fire” throughout the US west could make a big difference in defending ourselves against increasingly fierce and destructive fire seasons.

Hundreds of tribes across the west used prescribed burns for thousands of years until European settlers outlawed the practice. After years of resisting the idea of fighting fire with fire, state and federal agencies have begun increasingly embracing the strategy, said Don Hankins, a pyrogeographer and Plains Miwok fire expert at California State University, Chico.

“These hopeful stories from the Bootleg fire—there are lots of stories like that,” Hankins added. Last year, when the explosive Creek Fire hit the town of Shaver Lake, where the landscape had been treated with prescribed fire over the past two decades, the inferno calmed. Two decades ago, when the Cone Fire approached the Blacks Mountain experimental forest in north-eastern California, foresters reported that the flames fell to the ground and in some cases fizzled out when they reached areas that had been thinned and treated with fire.

Still, despite decades of scientific evidence and centuries of cultural understanding that prescribed fire is crucial to averting catastrophe in California’s wildlands, the current levels of funding and institutional support for the practice are insufficient, said Hankins.

This week, the US Forest Service chief, Randy Moore, said that with thousands of firefighters struggling to contain blazes across the US west, the agency would cease its use of good fire. “We are in a ‘triage mode’ where our primary focus must be on fires that threaten communities and infrastructure,” Moore said in a letter announcing the new policy. “When western fire activity abates, we will resume using all the tools in our toolbox.” Dozens of scientists sent a letter asking the agency to reconsider, as did retired fire managers for the Forest Service.

“The amount of land that’s treated with fire can’t be a postage stamp. We need to really scale it up.”

As severe drought and increasingly frequent heatwaves exacerbated by the climate crisis fuel more dangerous fires, investment and support for cultural burns are needed now more than ever, Hankins said. Prescribed burning “doesn’t necessarily stop fires per se, but it changes the fire’s behavior”, he said. “To really make a difference, the amount of land that’s treated with fire can’t be a postage stamp. We need to really scale it up.”

For example, the North Complex fire, 2020’s deadliest wildfire, initially simmered slowly around the Plumas national forest—which foresters said was to be expected, because the area had been treated with fire. But fanned by fierce winds, the fire zipped through untreated land to the south, destroying the small town of Berry Creek. Experts have suggested that using more “good fire” to clear out the shrubs and dried vegetation in the areas surrounding the town could have saved it.

A look back in time offers further evidence that regular burns—natural and prescribed—can temper the most damaging blazes. During a severe drought in 1918, 200,000 acres burned in the same region the Bootleg fire is torching now—but back then, “almost all the forest canopy survived”, said Keala Hagmann, a research ecologist at the University of Washington who published a 2019 study of tree rings that chronicled the history of fires in the area. Centuries-old trees survived droughts and fires back then, before the US government began aggressively suppressing wildfires and shunned prescribed burns.

Before European settlers arrived, “we lived with fire. It was as common as a summer thunder shower.”

That is why the tribe has sought to work with nonprofits like the Nature Conservancy and state and federal agencies, to steward and restore their historical landscape, Gentry said. Before European settlers arrived, “we lived with fire. It was as common as a summer thunder shower,” he said. Now, as the region enters an era of megafires incited by global heating, Indigenous fire practitioners, scientists and local governments need to help the public embrace the idea that “fire is a treatment for fire.”

“Looking around, I can already see that the Klamath Tribes have lost massive areas of hunting grounds, valuable cultural plants and probably some archaeological sites,” said Steve Rondeau, the natural resources director for the Klamath Tribes, who has been driving through some of the areas the Bootleg fire seared. “But, at the same time, I feel we’ve gained a lot as well.” The fire, he said, has helped validate the decades of work Indigenous practitioners of prescribed fire have put into the land.

“The tribes have a saying: ‘Heal the land, heal the people,’” Rondeau said. “And our lands around here need a lot of work, and a lot of hands coming together to heal them.”