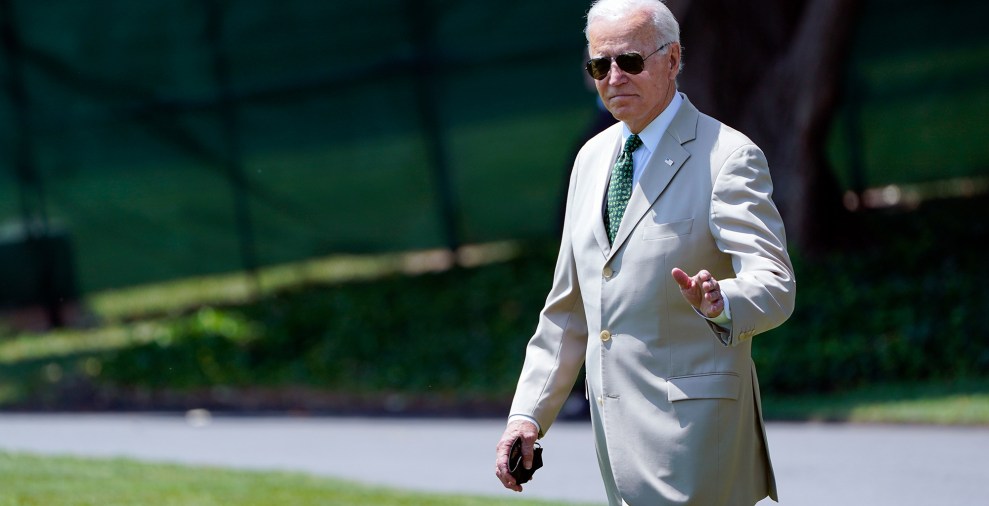 This story was originally published by the Guardian and is reproduced here as a part of the Climate Desk collaboration.

A stark UN report on how humanity has caused unprecedented, and in some cases “irreversible,” changes to the world’s climate has heaped further pressure on Joe Biden to deliver upon what may be his sole chance to pass significant legislation to confront the climate crisis and break a decade of American political inertia.

The US president said the release on Monday of the Intergovernmental Panel on Climate Change report showed that “we can’t wait to tackle the climate crisis. The signs are unmistakable. The science is undeniable. And the cost of inaction keeps mounting.”

The IPCC report, developed over the past eight years by scientists who combed over more than 14,000 studies, shows that the US, like the rest of the world, is running out of time to avoid disastrous climate impacts, with a critical global heating threshold of 1.5 C to be breached far earlier than previously expected, potentially within a decade.

“This is not a future problem, it’s a problem now. I’m literally seeing climate change out of my window, climate change is in my lungs,” said Linda Mearns, an IPCC report co-author located in Boulder, Colorado, which has been baked in extreme heat and wildfire smoke in recent weeks.

Mearns, who has been involved in IPCC reports since 1990, said the latest iteration was “very through and disturbing” and demanded a strong response. “I’m not sure what will be required for people to get it, but my hope is that it will galvanize everyone in Glasgow to meet their agreements,” she added in reference to UN climate talks between world leaders in October.

Much of that global action will hinge upon the response mustered by the US, the world’s second-largest carbon emitter. Biden’s narrow window of opportunity to drastically cut emissions is dependent upon the contents of a $3.5 trillion bill that Democrats hope to pass before midterm elections next year, when the party may well lose control of Congress.

“Congress didn’t pass a climate bill in 2009 and it’s taken over a decade to get us back to serious climate legislation,” said Leah Stokes, a climate policy expert at the University of California, Santa Barbara. “This summer is the best chance we have ever had to pass a big climate bill. This is it. President Biden is poised to become the climate president we need. But there are no more decades left to waste.”

Stokes said she was “very optimistic” the reconciliation bill would include two critical climate measures to help the US slash its emissions in half this decade—a scheme to help utilities to phase out fossil fuels from the electricity grid and tax credits to encourage renewable energy and electric cars.

The measures will need the support of all Senate Democrats, including Joe Manchin and Kyrsten Sinema, who have expressed doubts over the scope of the bill. Republicans, who have long allied with the fossil fuel industry to oppose any significant action to avert the climate emergency, are uniformly opposed to the bill.

“If senators truly followed the science in this report, we’d have 100 votes for climate action,” said Ed Markey, a Democratic senator who help craft the Green New Deal proposal with Alexandria Ocasio-Cortez. Markey said the IPCC report “must be the final warning to the world that time has run out to save the planet from dangerous and irreversible climate change”.

Climate campaigners have urged Biden to do more to match his rhetoric, pointing out that the IPCC report highlights the sharp increase in methane, a potent greenhouse gas produced from oil and gas drilling, as well as from animal agriculture. The federal government is mulling new restrictions on methane, although new leases for drilling are still being issued.

“Our politicians shouldn’t need a report to tell them how bad things are.”

“This latest IPCC report must be a wake up call for Biden and Congress that the half measures they’ve proposed are not nearly enough to end the climate crisis,” said Varshini Prakash, executive director of Sunrise Movement, who said she had woken up “enraged” at the IPCC’s findings. “Our politicians shouldn’t need a report to tell them how bad things are. We’re already living it.”

Scientists, too, have called for their repeated warnings over the climate crisis, so often eclipsed by political intransigence or falsehoods spread by the fossil fuel industry, to finally be heeded by US lawmakers. “There’s really one key message that emerges from this report: we are out of time,” said Kim Cobb, a climate scientist at Georgia Tech.

Several climate impacts are now locked in even if planet-heating emissions are severely cut, including global sea level rise of at least a foot and a half by the end of the century, imperiling coastal American cities already struggling with increasing flooding. The increase could even balloon to 7 ft if the Antarctic ice sheet collapses more quickly than expected.

The US west is now racked by prolonged drought, extraordinary record-breaking heat and enormous wildfires and the IPCC report warns all of these phenomena will get worse, with dangerous heatwaves that once would have occurred every 50 years already becoming more common and expected once every five years at 1.5 C of warming.

“The continued dithering is no longer about the lack of scientific evidence, but rather directly tied to a lack of political will and the overwhelming influence of the fossil fuel industry,” said Kristina Dahl, senior climate scientist at the Union of Concerned Scientists. “The scientists keep showing up time and time again. Now it’s time for policymakers to do the same.”