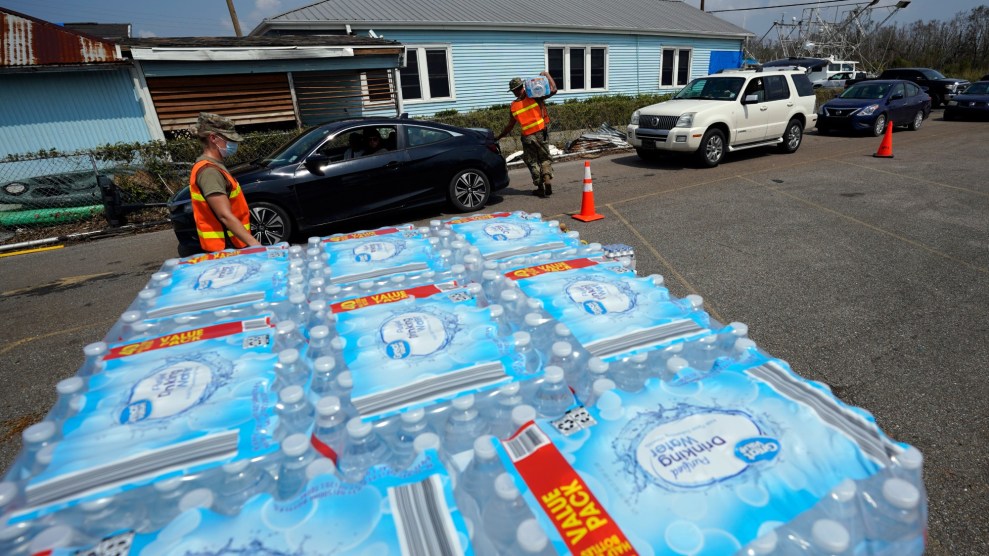 It has been a week and a half since Hurricane Ida hit the Gulf Coast and the devastating impacts of the Category 4 storm are still being felt throughout the region. Some 418,000 people in Louisiana remain without power, unable to run air conditioning units to deal with scorching late summer temperatures or keep food fresh in homes and grocery stores. The storm has also forced hundreds of municipal water systems offline, creating a drinking water crisis that officials warn could last weeks.

As of Tuesday, 51 water systems across Louisiana, each serving between 25 to 20,000 people, remained shut down due to Ida. Another 242 remained under boil water advisories. Around 642,000 people remain without access to clean water, according to the Louisiana Department of Health. In Mississippi, the state Department of Health has 10 active boiling water notices, affecting 7,142 people.

“There is no particular timeframe for all systems to come back up to 100 percent,” Kevin Litter, a spokesperson for Louisiana Department of Health, said in an email. “This will be different for every system and also based on location.”

Louisiana has one of the worst water systems in the country, which has left it vulnerable to storms like Ida.

The reasons for the immediate water crisis are two-fold: Across Louisiana and Mississippi, Hurricane Ida ripped down power lines, leaving water systems unable to get the electricity they needed to pump groundwater or to run treatment facilities. Even though Louisiana mandates that all water systems have backup, fuel-powered generators, many don’t comply with the rule, Litter explained. Those who do have backup pumps are being affected by the extended blackout still crippling parts of the Gulf a week post-storm—a situation that has created fuel shortages that leave generators useless. Flooding on roads can also leave critical infrastructure, like water wells or pump stations, out of reach, making it impossible to fix storm damage. Lastly, the destruction of roads and bridges has literally ripped apart water pipelines, disrupting the whole system.

Intensified by climate change, Hurricane Ida is one of the strongest storms on record to hit the Gulf Coast. But the 150-mile-per-hour winds that took down electric lines, trees, and homes, as well as the powerful storm surge that briefly reversed the flow of the Mississippi River, can’t fully explain the state’s water systems failures.

Underlying the immediate devastation is the fact that Louisiana has one of the worst water systems in the country, which has left it vulnerable to storms like Ida. In 2017, the American Society of Civil Engineers, or ASCE, gave the state’s drinking water system a D- in a recent infrastructure report card. “We have an antiquated water supply and water pumping system,” Craig Colten, professor emeritus of geography at Louisiana State University and an expert on resilience, told Grist. “Our sewage treatment system is aged, and our infrastructure has not been maintained.”

Nearly 60 percent of Louisiana’s water systems—1,335—are more than half a century old. Most of these systems are chronically underfunded, according to the ASCE, creating threats to water quality. Just last year, 831 water systems (serving 606 communities) had 4,582 violations of water quality standards, according to the Louisiana Department of Health. National analyses from the Natural Resources Defense Council have found that drinking water systems in constant violation of the law are 40 percent more likely to serve populations with higher percentages of residents who are people of color.

Many of these violations come from the fact that small towns can no longer fund the maintenance and repair of their water systems, explained Colten. Especially in northern and central Louisiana, people have been moving away from rural towns into bigger cities. As a result, many of those communities have found themselves unable to provide public services for those who stay, forcing some neighborhoods to take care of the systems themselves, according to reporting from The Advocate. The lack of resources has led to a situation in which about 20 percent of the state’s water systems are constantly violating the law, The Louisiana Illuminator reported earlier this year.

The pre-existing fragility of Louisiana’s water systems creates a situation in which, as demonstrated last week, it doesn’t take much to tip the scales from dysfunctional to full-blown shut downs. “It might be somewhat unrealistic to expect that systems that are serving 500 people or even the smallest systems, 25 people, would be resilient to a [hurricane like] Ida,” said civil and environmental engineer Christine Kirchhoff, an associate professor at the University of Connecticut.

Roughly 30 percent of state parishes are at risk of saltwater intrusion into their wells and aquifers.

But the problems go beyond power and pipelines. With rising sea levels, approximately 30 percent of the state parishes are at risk of saltwater entering the wells and aquifers where they source their water, according to ASCE’s 2017 report card. The Investigative Reporting Workshop and WWNO/WRKF found that many aquifers in the state  are shrinking fast, mainly because agriculture and oil and gas industries are over-pumping groundwater reserves.

Finding long-term solutions to the state’s water woes will not be easy, but experts say funding is a must. Louisiana’s drinking water infrastructure will need $7 billion in additional funding over the next 20 years, Karine Jean-Pierre, President Biden’s deputy press secretary, said in May at a press briefing. The $111 billion infrastructure bill recently approved in Congress will surely breathe some air into the asphyxiated finances of local water systems.

However, money to modernize infrastructure or buy backup generators for emergencies is not enough, said Kirchhoff. Part of what needs to happen, she said, is to have “a pool of staff who are available to these smaller systems to help them apply for funding or understand the regulatory changes, and be able to bring their system up to compliance.”

Conservation and creating a water resource and management plan can also help.  “We’re a state that gets 60 inches of rainfall a year on the average, and we’re expecting more rain, more moisture with climate change,” Colten said. “There’s plenty of water. Water availability isn’t the issue.” We need to invest in water systems that can handle this influx, he said.