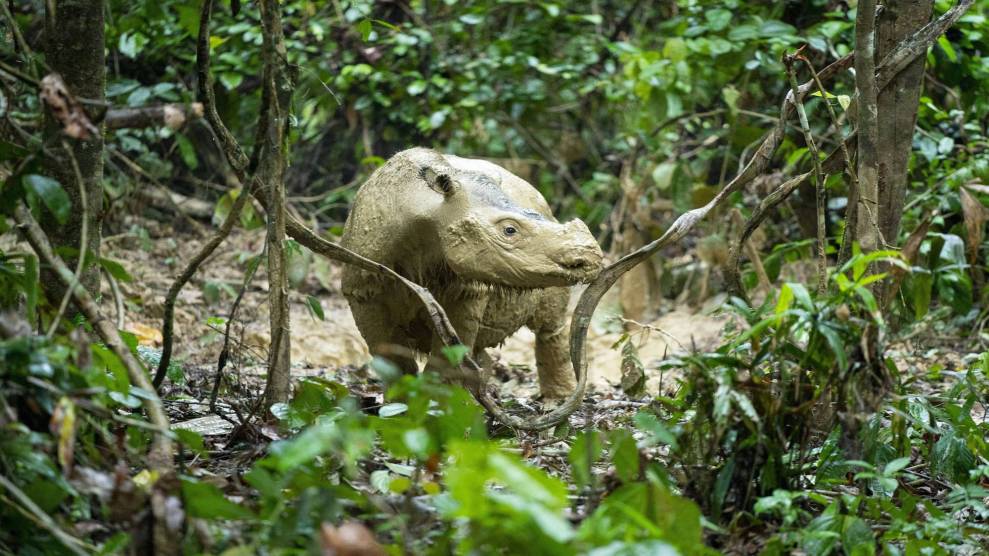 The last Sumatran rhinoceros photographed at her sanctuary on the island of Borneo. October 30, 2019.Kaisa Siren/Imago/ZUMA

The Sumatran rhino, the smallest, shaggiest, and most endangered of the world’s five rhinoceros species, is found only on the Indonesian islands of Sumatra and Borneo. This rhino’s solitary nature and preference for dense forests makes it difficult to count, but researchers believe that fewer than 80 survive outside captivity; most of those are isolated in tiny populations, severely threatened by poaching and road construction. The species was one of the first added to the international Red List of Threatened Species when the list was established in the 1960s, and it has remained on the list ever since, its status slipping from “Endangered” to “Critically Endangered” in 1996. Like so many other species on the Red List, the story of the Sumatran rhino appears sadly two-dimensional, a single line that too often points downward.

The official story of the Sumatran rhino—and that of other vulnerable species worldwide—is now undergoing a dramatic revision. At the quadrennial World Conservation Congress, which begins this week in Marseille, France, the International Union for Conservation of Nature (IUCN)—the intergovernmental organization that oversees the Red List—will formally introduce the Green Status of Species, a set of metrics designed to characterize the past and potential future recovery of each species on the Red List.

While the Sumatran rhino’s low numbers may well keep it in the Critically Endangered category for decades to come, its Green Status assessment puts its long-term recovery potential near 50 percent, meaning that continued conservation efforts over the next century could take the species nearly halfway to full recovery. Conservation progress has been slow so far, the assessment acknowledges, and the species remains wholly dependent on conservation measures. The good news, however, is that Sumatran rhinos can survive in hilly terrain that is little threatened by deforestation. And given expected improvements in captive breeding technologies and reductions in the black-market demand for rhino horn in the coming decades, experts say, it’s feasible that hundreds of rhinos could be reintroduced to well-protected sites in Sumatra and Borneo. For a species that has long been considered little more robust than a museum display, that’s a radical shift in its narrative—one that may well lead to new commitments of money and effort.

“We don’t want to only be preventing extinctions, we want to be getting species closer to full recovery.”

“So many people think about species in terms of how close to endangerment or extinction they are, but actually, what we want to do is recover species,” says Barney Long, director of conservation strategies for Re:Wild and co-chair of the IUCN Green Status Working Group. “We don’t want to only be preventing extinctions. We want to be getting species closer and closer to full recovery.” The Green Status assessments, Long hopes, will direct the attention of conservationists, governments, and the general public toward “what we want to achieve as well as what we want to avoid.”

The conservation movement wasn’t always so focused on preventing extinction. When the modern conservation movement began in the United States and Europe in the late 1800s, conservation leaders were primarily concerned with passing laws designed to keep common species common—either because they liked to hunt them or because they saw that they were being cruelly exploited. With the prominent exception of the American bison, which was nearly driven extinct in the early 1900s after decades of commercial hunting, the global extinction of treasured species was a motivating but relatively distant threat.

Priorities began to shift in 1948, when the British biologist Julian Huxley and other prominent conservationists founded the international network now known as the IUCN. The newborn union tasked itself with the not-so-modest goal of conserving “the entire world biotic community,” but it faced what the historian Robert Boardman calls “a data gap of awesome proportions.” There was no single source of information about the world’s species, and the information that did exist was spotty and cached all over the globe.

Resolving that they had to start somewhere, the IUCN’s scientific advisers drew on studies by the New York Zoological Society to assemble a list of 14 mammals and 13 birds thought to be most in danger of extinction—a list that included two of the three Asian rhino species. In 1963, Peter Scott, son of the ill-fated Antarctic explorer Robert Scott, became head of the IUCN Species Survival Commission. Under Scott’s direction, the commission compiled research from around the world into a series of profiles of threatened species.

What began as a stack of index cards is now a database describing the conservation status of more than 130,000 animal and plant species, and scientists classify and periodically reclassify those species into categories ranging from Least Concern to Extinct. The list’s assessments underlie international agreements such as CITES, the Convention on International Trade in Endangered Species of Wild Fauna and Flora, and are used by conservation organizations and their funders to set priorities and measure progress.

By showing the world that thousands of species were closer to extinction than anyone realized, the Red List has surely saved many plants and animals from oblivion. The list’s global reputation raised media and conservation interest in emergency cases, and it continues to do so. But Resit Akçakaya, a professor at Stony Brook University who chairs an IUCN committee charged with resolving disputes over Red List decisions, says that while “the Red List is doing what it’s supposed to be doing,” the complaints he hears have a common theme: “Most of the controversies have to do with the fact that extinction risk is not sufficient for deciding how to protect species, how to distribute funding, and how to decide if a species has recovered.”

Green Status assessments could be used to characterize the current and potential recovery of entire groups of species.

Species decline, after all, can be measured with relative ease. Species recovery—the point at which a species is healthy enough to rejoin the “biotic community” that the IUCN strives to protect—is much harder to quantify. Though a Red List species might be promoted from, say, Near Threatened to Least Concern, that only indicates that the species has gained a certain distance from extinction. It hasn’t necessarily restarted its relationships with other species, or resumed its role in its ecosystem, or repopulated its former range. Those are the hallmarks of recovery, and the Red List wasn’t designed to include them.

In late 2012, the delegates to the IUCN World Conservation Congress in South Korea passed a resolution in support of “objective criteria for a Green List of species, ecosystems, and protected areas.” The focus on avoiding and reversing species declines was “critical but insufficient,” the delegates wrote, and “therefore must be complemented by a strategy for recovering species and ecosystems.”

The criteria for the Green List of Protected and Conserved Areas were approved in 2017, and since then, 59 protected areas in 16 countries have met the requirements for inclusion. Developing a Green Status assessment process for species took longer, as IUCN scientific advisers first had to agree on a definition of “full recovery” and then establish standard methods of estimating the past and potential future recovery for species ranging from mosses to whales. That job is far from complete, but a paper published in Conservation Biology in late July analyzed preliminary Green Status assessments for 181 species, including the American bison, the gray wolf, the Patagonian bumblebee, the Honduran rosewood, and a fern-like plant called the Piedmont quillwort.

The more than 200 experts involved in the study assessed each species for its conservation legacy (how much it has benefited from past conservation actions), its conservation dependence (how it would fare over the next decade if conservation were to cease), and its short- and long-term recovery potential. These metrics were used to assign each species a Green Status category ranging from Extinct to Fully Recovered.

The researchers found that species in the same Red List category sometimes had very different prospects. While two Australian species, the Lord Howe stick insect and a pink-flowering shrub called Caley’s grevillea are both in the Critically Endangered category on the Red List, the Lord Howe stick insect has far greater recovery potential in the short and long term because suitable habitat is available for its reintroduction. On the other end of the spectrum, the saltwater crocodile is in the Least Concern category on the Red List, but because it occupies only a very small part of its former range, its Green Status is relatively low.

Eventually, Green Status assessments could be used to characterize the current and potential future recovery of entire groups of species—pollinators, for example, or wild relatives of domesticated crop species such as wheat and corn, or soil-dwelling organisms. Green Status indexes of these groups, Long says, could help focus government and aid-agency attention on measures most likely to support and protect the human food system.

Together, the Red List and the Green Status tell a story that combines fear and hope. Molly Grace, an ecologist at the University of Oxford who co-chairs the Green Status Working Group with Long, says the fuller narrative comes at the right time. “We’re inundated with bad news about conservation, and even people who have been in conservation for a long time sometimes wonder if it’s worth it,” she says. “But conservation is such a necessary field, such a necessary science and practice. Providing a clear-eyed look at where we’ve had success—and where we can have success—can be really powerful and really motivating.”