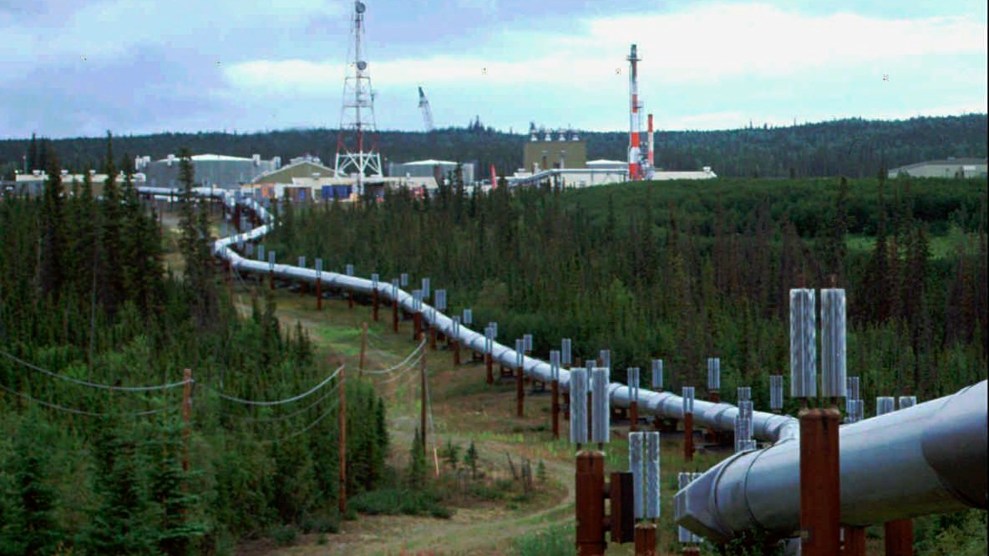 The Trans-Alaska pipeline and pump station north of Fairbanks.Al Grillo/AP

The United States and the EU made a joint pledge on Friday to cut global methane emissions by almost a third in the next decade, in what climate experts hailed as one of the most significant steps yet towards fulfilling the Paris climate agreement.

The pledge came as the UN secretary-general, António Guterres, warned of a “high risk of failure” at the vital UN climate talks, Cop26, set for Glasgow this November.

Methane is a potent greenhouse gas, about 80 times more effective at trapping heat in the atmosphere than carbon dioxide, and emissions have been rising in recent years. Natural gas production and fracking, meat production and other forms of agriculture are among the chief sources.

The pact between the United States and the EU sets a target of cutting at least 30 percent from global methane emissions, based on 2020 levels, by 2030. If adopted around the world, this would reduce global heating by 0.2 degrees Celsius by the 2040s, compared with likely temperature rises by then. The world is now about 1.2 degrees Celsius hotter now than in pre-industrial times.

Boris Johnson said the UK would be one of the first to join the US-EU methane pledge, when it opens for more signatories at Cop26. He told a meeting of world leaders from major economies on Friday: “Over the last 30 years the UK has cut emissions of methane by something like 60 percent. And there are good commercial uses for methane, you can use it to make fabrics, you can use it to make antifreeze. So the world could slash its output of this powerful greenhouse gas tomorrow if we wanted to.”

The announcement was an important win ahead of Cop26. Momentum on the Cop26 talks has faltered in recent days, as two reports were published that showed key targets at the talks were far off track.

“Cutting methane is the single biggest and fastest way to slow warming in the next two decades.”

The UN published a report on Friday that found current pledges on emissions from national governments would result in an increase of 16 percent in emissions in 2030 compared with 2010 levels, whereas scientists warn that emissions must fall by 45 percent in that period to stay within 1.5 degrees Celsius. The OECD also published a report on Friday showing that climate finance—funding from private and public sources that flows from the rich world to developing countries, to help them cut emissions and cope with the impacts of extreme weather—was falling about $20bn short of a longstanding target of $100 billion a year.

Guterres said: “The world is on a catastrophic pathway to 2.7 degrees Celsius of heating. There is a high risk of failure of Cop26. It is clear that everyone must assume their responsibilities. We need more ambition on finance, adaptation and [emissions cuts] … This is a crucial question of trust.”

He added that the failure to come forward with stronger pledges on emissions was “breaking the promise made six years ago to pursue the 1.5C goal of the Paris Agreement. Failure to meet this goal will be measured in the massive loss of lives and livelihoods.”

Guterres and the UK prime minister, Boris Johnson, will co-host an emergency summit of more than 30 world leaders on Monday at the UN general assembly in New York, aimed at breaking the deadlock over climate finance and laying the groundwork for a new global climate push at Cop26. The UK’s aim as host of Cop26 is to show that the world can “keep alive” hopes of limiting global heating to 1.5 degrees Celsius, the lower of two limits in the 2015 Paris agreement.

Cutting methane emissions would make a substantial contribution to achieving that goal, said Paul Bledsoe, of the Progressive Policy Institute in Washington DC and a former climate adviser in the Clinton White House. “The EU and Joe Biden deserve real credit—this is the first concrete step on the possible road to success at Cop26.”

According to a report from the UN in May, cutting methane is the fastest and most effective way to reduce the rate of global temperature increase and keep within the 1.5 degrees Celsius goal. The Intergovernmental Panel on Climate Change, the global authority on climate science, also called in August for “strong, rapid and sustained reductions in methane”.

There was a record rise in emissions of methane last year, according to the UN, coming mainly from the fossil fuel industry, cattle and rotting waste. But the UN also found that methane emissions could be almost halved by 2030 using existing technology and at reasonable cost. A significant proportion of the actions would actually make money, such as capturing methane gas leaks at fossil fuel sites.

Durwood Zaelke, president of the Institute for Governance and Sustainable Development, said: “President Biden and his climate envoy John Kerry have changed climate politics in the last few months by shifting the focus from 2050 to 2030 and the need to make this the decade of action. To do this, they’ve wisely put methane mitigation in the spotlight, and elevated it to the heads of state level.”

He said: “Cutting methane is the single biggest and fastest way to slow warming in the next two decades, and it gives us the best chance for keeping the 1.5 degrees Celsius goal in sight. Cutting methane is our best and probably last hope to keep the planet safe. The key is to use the global methane pledge as a beachhead for an all-out assault to cut this super climate pollutant as fast as possible.”