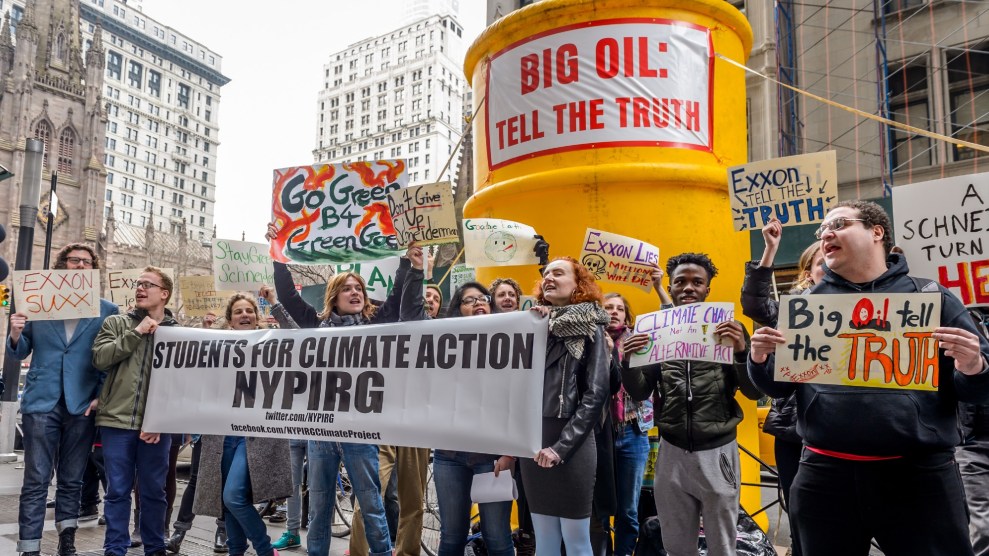 Activists deliver a letter to then New York Attorney General Eric Schneiderman in support of his investigation of ExxonMobil. Erik McGregor/LightRocket/Getty

For more than a decade, researchers and journalists have tried to lay bare the PR machine employed by fossil fuel companies to delay climate action. In Merchants of Doubt, science historians Naomi Oreskes and Erik Conway detailed the critical role some scientists played in denying the soundness of climate science. Later, an investigation by InsideClimate News revealed that while Exxon denied climate change publicly, its own scientists were aware for decades of how fossil fuels warm the planet.

Political leaders have long cited economic research on how taking action on climate change would be prohibitively expensive. President Donald Trump even used the findings as part of his reasoning to withdraw the United States from the Paris Agreement. But who exactly is behind that economic research?

Legal expert, physicist, and now science historian Benjamin Franta, of Stanford University, decided to take a deeper look. He recently published his findings in the journal Environmental Politics: Since the late 1980s, economists at private consulting firms, funded by the fossil fuel industry, have played a key role in shaping public discourse about climate policy in the United States, hawking flawed research and spreading disinformation everywhere from newspapers to congressional testimonies. In an interview with Grist, Franta discusses economists’ role in the fossil fuel industry’s PR campaign, and why these relationships flew under the radar for such a long time. “For decades, [these] economists have been inflating the cost of action,” Franta said, “and downplaying the cost of inaction.”

What inspired you to do this particular research on the economic think tanks that have influenced climate policy?

It happened by accident. About four years ago, in 2017, I was doing research for one of my graduate history classes at Stanford about the American Petroleum Institute and its history with regard to climate change. I was downloading large collections of newspaper articles and I noticed that it wasn’t just the denial of climate science that the industry was promoting, it was these economic talking points as well. I also noticed that the economic experts or sources that the industry cited tended to be the same few people over many years, often Charles River Associates, an economic consulting firm. As I was doing all this research, then-President Trump announced that the United States was going to withdraw from the Paris Agreement. He cited economic statistics that sounded a lot like what I’d been reading from newspaper articles in the 1990s. The study was written by some of the exact same people I had been reading about.

Who were these people, and what were their strategies?

I tried to track all the activities that I could from the economic consulting firm Charles Rivers Associates. Every time a major climate policy was proposed, these economists would be there, writing newspaper articles and giving testimony in front of Congress. From carbon tax conversations in the Clinton administration to [opposing] international treaties, like the Kyoto Protocol and the COP meetings. They also worked to defeat the cap and trade bills that were proposed throughout the 2000s in the United States. When that was basically defeated, and climate policy became an issue for the states, like in California, they would go to address the California climate policies too.

There is one advertorial in the New York Times, an advertisement presented as a news article, from March 6, 1997. This was around when the Kyoto Protocol was being negotiated. The piece iss called “Stop, Look and Listen before we leap,” and it starts off: “International efforts to deal with climate change are lurching from speculation towards actions that could wreak havoc on nations, even as the underlying science and economics continue to signal caution.” It represents this two-prong strategy that the industry used again and again, where it would cast doubt on the science and say, “Well, actually, we don’t know if climate change is happening, or if it’s from fossil fuels.” And then they would go, “And even if it does, it’s too expensive to act.”

Were these statistics peer-reviewed? How credible were they?

It’s a very corrupt process where the industry pays the consultants to come up with the result that the industry wants. And they can’t give anything else because their model can only produce this outcome. It’s not a peer-reviewed publication, the details are not even available to other economists to scrutinize because their models are proprietary. And then it’s printed in newspapers, like the New York Times, and it’s given in congressional testimony to senators and representatives, where it’s passed off—often by the oil companies that paid for it—as independent, rigorous research when it was neither one of those things.

You mentioned that the models are designed in a way that rigs the game from the start. Can you explain that?

Basically, the model starts off assuming that the economy is already optimal, and is already working the best that it can. When you assume that, then the inevitable outcome of any policy to intervene in the economy is, by definition, going to cost money instead of saving money. And of course, that’s not a logical outcome. These economists were assuming things like that renewable energy will always cost eight times more than fossil fuels, even 100 years into the future. They ignored all the benefits of avoiding climate change. Without any sort of evidence, they would say things like, “Climate change is not going to hurt the economy until around the year 2100.” They only add the costs of moving away from fossil fuels.

Did anyone catch those errors in calculations back when they were done?

Some people did notice at the time. When I’m reading the historical record, I’ll sometimes see somebody like Florentine Krause, director of the International Project for Sustainable Energy Paths, say, “Hey, it looks like these models were designed to come up with this answer.” But these were lone voices in the wilderness.

We’ve been talking for years about science denial, and how companies like Exxon publicly denied the problem even when their own scientists were warning them of the changes underway. Why do you think the contributions of economists to this disinformation campaign have been able to fly under the radar for so long?

These economists weren’t completely alone in their approach. Charles River Associates was simply the preferred source for the industry. We might laugh at some proclamations in these economic reports, like that climate change is not going to hurt us until the year 2100. But what surprised me the most is that I found even more outlandish things said by prestigious professors at universities like Stanford, heads of departments, who themselves were getting a lot of funding from the oil and gas industry. They used their academic credentials to kind of launder their bad science.

Has the strategy changed or mutated in more recent years? Are the same economists  writing reports today like the ones you found in the 1980s and 1990s?

A lot of the consultants working on climate left Charles River Associates around the same time, and they ended up at NERA, or National Economic Research Associates. That was actually the firm that produced the report that former President Trump cited to justify leaving the Paris Agreement. So the firms change, and sometimes the people change, there are new people that get involved over time, and others retire. But the basic strategy has stayed largely the same for over 30 years now.

What do you think should be the main takeaway from these new findings?

For decades, economists have been inflating the cost of action, and downplaying the cost of inaction. And largely, they’ve been doing that based on an outmoded economic paradigm. Just because a lot of people have built their careers based on this approach, it’s not a good enough reason to keep doing it, if it’s hurting us.

This interview has been edited for length and clarity