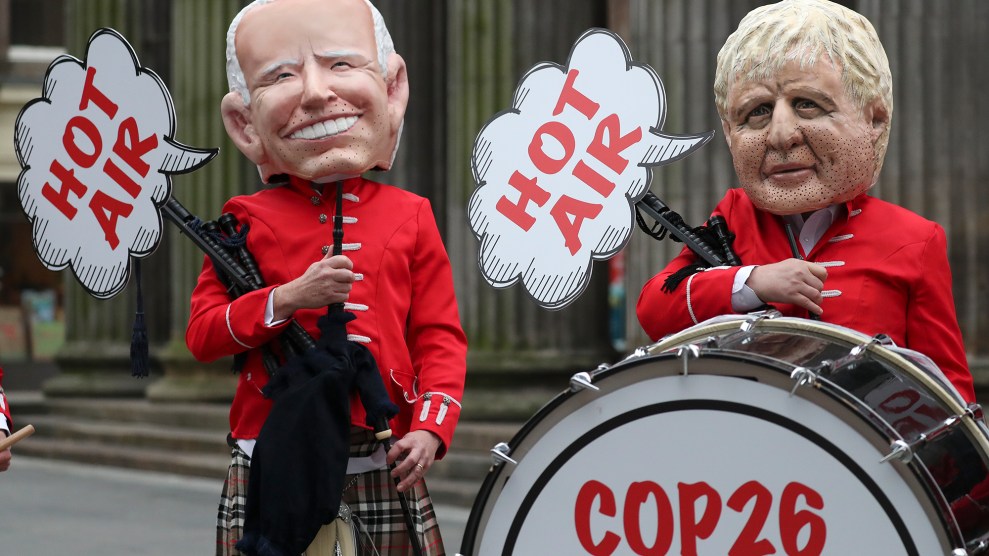 The United Nations climate talks in Glasgow, Scotland, are on pace to conclude in two days with an agreement that, despite acknowledging the scope and cause of the climate crisis, appears set to fall far short in bending the emissions curve.

The draft agreement released early Wednesday made history as the first formal pact to explicitly mention fossil fuels as a source of climate-changing pollution after more than a quarter-century of these summits.

The document calls upon signatories “to accelerate the phasing out of coal and subsidies for fossil fuels” and asks them to hasten plans to cut climate-changing emissions in hopes of keeping global temperatures from climbing 1.5 degrees Celsius, or 2.7 degrees Fahrenheit, beyond pre-industrial averages.

But the draft pact fails to muster the $100 billion per year in financing developing countries need to fortify themselves against climate damages and lift their populations out of poverty without tapping all their available fossil fuel resources. And while it sets a faster timeline for nations to up their ambition, it provides no real way to enforce that process.

The language could, in theory, be strengthened before it is ratified. But it’s more likely to be watered down as negotiators seek to settle on something more than 200 countries—including oil-pumping Saudi Arabia, coal-digging Australia, and the gas-drilling U.S.—can sign.

1. It would be the first global climate pact to call out fossil fuels by name.

The 2015 Paris Agreement made history as the first to include the United States and China—the world’s No. 1 cumulative emitter and No. 1 annual emitter, respectively—in a pact that acknowledged the crisis of spewing carbon into the atmosphere and agreed to reduce the output. But the agreement did so without ever naming fossil fuels, the primary source of CO2 pollution.

The 19th of 71 bullet points in the draft agreement “calls upon Parties to accelerate the phasing out of coal and subsidies for fossil fuels.”

If that counts as a breakthrough, it’s only because of how successful the fossil fuel industry’s efforts to sow doubt over the long-understood relationship between burning oil, coal and gas and rising global temperatures.

The planet is already 1.1 degrees Celsius warmer than it was in the early 1700s, before factories, power plants, automobiles and airplanes started belching carbon into the atmosphere. The signs of that warming are evident in increasingly extreme weather, prolonged droughts and shorelines disappearing into the sea. If temperatures rise another 1.5 degrees Celsius, those effects are projected to become far worse.

In 2015, campaigners in Paris chanted the slogan “1.5 to stay alive” to highlight the reality that another half-degree of warming threatened to damn low-lying island nations to an Atlantis fate and render desert countries close to the equator uninhabitable. Today, activists are just trying to stoke hope for maintaining that goal with the new chant: “Keep 1.5 alive.”

They have their work cut out for them. An analysis published Tuesday by the nonprofit Climate Action Tracker found that countries’ current emissions-cutting pledges have set a course for the planet to warm another 2.4 degrees Celsius. That would blow past even the Paris Agreement’s less ambitious goal of keeping warming below 2 degrees Celsius.

That alone doesn’t offer much to vulnerable countries, but it goes on to recognize “that the impacts of climate change will be much lower at the temperature increase of 1.5°C compared to 2°C and resolves to pursue efforts to limit the temperature increase to 1.5°C, recognizing that this requires meaningful and effective action by all Parties in this critical decade on the basis of the best available scientific knowledge.”

The draft also heeds the reality that “limiting global warming to 1.5°C by 2100 requires rapid, deep and sustained reductions in global greenhouse gas emissions, including reducing global carbon dioxide emissions by 45 per cent by 2030 relative to the 2010 level and to net zero around mid-century.”

3. When it comes to making those cuts faster, the plan is to make a plan next year.

The Paris Agreement asks signatories to reassess and ratchet up their emissions-cutting plans every five years. This year’s conference was so important because it marked the first scheduled five-year ramp up. (Technically, it’s six years later, but last year’s summit was postponed due to the COVID-19 pandemic.)

This agreement looks unlikely to accomplish that goal. But the draft calls on countries to submit new, more ambitious plans next year and to prepare proposals that comply with the 1.5-degree goal by 2023.

At the 2018 summit in Katowice, Poland, negotiators agreed to most of what became known as the “Paris rulebook”—a set of standards for countries to adhere to the Paris Agreement’s goals. But one section remained an open question: Article 6, a complex portion that aims to set up a trading system that would allow countries to exchange rights to spew pollution into the atmosphere.

In theory, a carbon market would make countries that cannot avoid pollution pay a price, and nations that can absorb carbon through lush forests or technological investments reap a reward. But that sort of system of exchange fails to reckon with the fact that CO2 accumulates in the atmosphere, meaning that countries such as the U.S., Britain and Norway bear far more responsibility for the present crisis than nations whose emissions are still growing, such as India, Indonesia and Tanzania.

Advocates say Article 6 is a distraction from the more difficult work of simply reducing emissions. Statements from the fossil fuel industry have only increased that perception. In 2018, an executive from Royal Dutch Shell boasted about helping to write Article 6: “We have had a process running for four years for the need of carbon unit trading to be part of the Paris Agreement.”

“Carbon markets provide cover for empty greenwashing schemes, and are thus a way to distract from the real action people and the planet need, urgently,” said Rachel Rose Jackson, the climate research and policy director at the watchdog Corporate Accountability, over email Wednesday. “Article 6 is one of the battlegrounds where we are seeing the interests of polluting countries and corporations be pitted against the people’s and the planet’s.”

5. There have been some other pledges, too.

While the agreement is the main event in Glasgow, the gathering has yielded some other significant pledges. More than 100 countries signed a pledge to halt and reverse deforestation by the end of this decade—though there’s reason to doubt its effectiveness.

Nearly as many countries signed the Global Methane Pledge to cut emissions of the super-heating greenhouse gas at least 30% from 2020 levels by 2030. And the U.S. and about two dozen other nations joined an effort to halt public financing for fossil fuel projects overseas, while the United Kingdom wrangled another two dozen countries into an agreement to stop the buildout of coal—a goal that, while long expected, looks slightly out of reach during a year when coal use surged in response to a global energy crisis.

Perhaps most notable was a pledge from six automakers and more than two dozen countries to phase out internal combustion engine vehicles no later than 2040. The promise is in line with what France and the state of California have already mandated and has credibility thanks to soaring sales of electric vehicles. But big automakers, in particular, have made 180s on climate promises before.