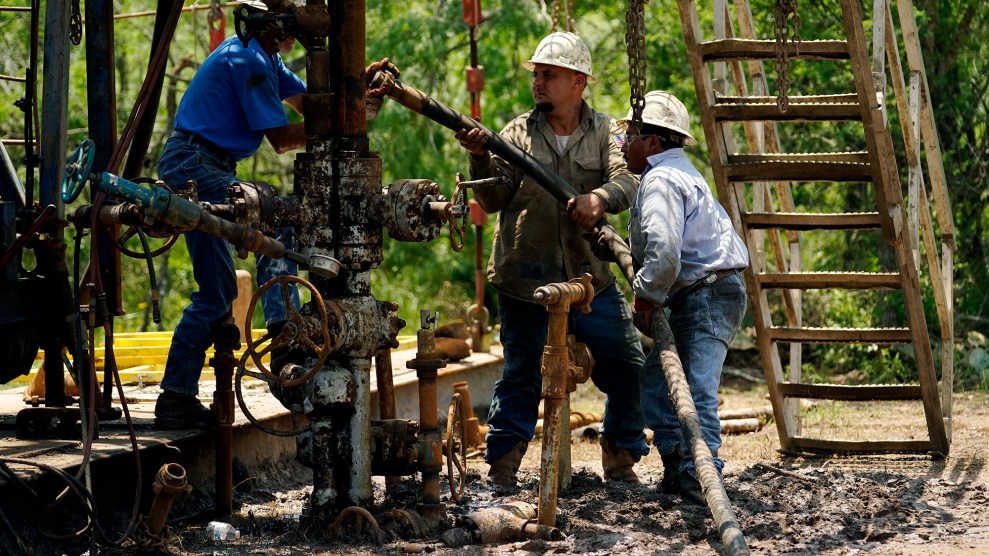 In January, the Department of the Interior stated what many have suspected: There are far more orphaned oil and gas wells in the US than previously estimated. In a memo, the agency wrote that more than 130,000 documented wells exist across the country that lack a responsible company on the hook to pay for cleanup—the remnant of more than 150 years of extracting oil and natural gas. This figure, based on data provided by the states, is two-and-a-half times the agency’s 2019 estimate, which put the figure at 56,000.

This ballooning estimate comes in response to Infrastructure Investment and Jobs Act that President Biden signed in November, which includes $4.7 billion to plug and reclaim abandoned and orphaned wells. This is a historically large figure, but the injection of cash pales in comparison to the full cleanup cost for the new abandoned-well figure. Plugging wells is a time-consuming and expensive process. Using estimates from a 2021 Government Accountability Office report, the cost of plugging all 130,000 abandoned wells could range from $2.6 billion to more nearly $19 billion. According to industry experts and the plugging cost estimates used by oil state regulators, the expected cost is very likely to fall on the upper end of that spectrum. And it’s likely that this larger figure represents only a fraction of the problem: The Environmental Protection Agency stated in an April 2021 report that there could be as many as 3.4 million abandoned wells nationally.

In a memo announcing the recent plugging program, the agency noted that “millions of Americans live within a mile of the tens of thousands of abandoned mines and oil and gas wells.” Interior Department Secretary Deb Haaland has emphasized the environmental justice aspects of this push to plug abandoned wells. In addition to their public health effects, abandoned wells are a well-documented sources of methane, a potent greenhouse gas.

The recent infrastructure spending package includes $250 million for wells on public land, which are overwhelmingly concentrated in the West, and an additional $150 million for tribal governments. Colorado, New Mexico and Wyoming alone account for 65 percent of all public land oil and gas leases, according to Bureau of Land Management data. Compared to many oil states, the BLM has a far less stringent system of required financial assurances from oil and gas companies to ensure cleanup in case the well becomes orphaned.

The agency recently held an online forum, led by BLM Director Tracy Stone-Manning and Deputy Director Nada Culver, to roll out the new well plugging program. The program featured testimony from industry experts, environmental groups, state oil and gas officials, and more. Several speakers urged the agency to increase the bonding requirements. Sara Kendall, the program director at the Western Organization of Resource Councils, described the federal minimum bond requirements as “decades out of date” and blamed the system for “the problems and the delays in getting … inactive wells plugged and reclaimed.”

During her tenure as Interior secretary, Haaland has emphasized the job-creation potential of a large-scale effort to deal with abandoned wells. She has backed a proposal included in the White House’s Build Back Better spending bill that would create 250,000 jobs plugging oil and gas wells. That bill is currently stalled in the US Senate. Job creation came up often during the public forum.

“We shouldn’t have to choose between good jobs and a clean environment; we can and must have both,” said Jason Walsh, the director of the BlueGreen Alliance, a coalition of environmental groups and labor unions. “And well remediation and reclamation is kind of a perfect embodiment of that principle.”

“We shouldn’t have to choose between good jobs and a clean environment; we can and must have both.”

So far, 26 states have stated that they intend to apply for these grants. On this list are the West’s leading oil and gas states, including: Alaska, Arizona, California, Colorado, Montana, New Mexico, Utah and Wyoming. Of these states, California (5,151), New Mexico (3,375) and Wyoming (1,350) had the highest number of reported orphaned wells, according to the most recent state reports from the Interstate Oil and Gas Compact Commission. Extra grant funding is available to states that “improve their plugging standards” or increase the financial assurances that oil and gas companies put forward to prevent wells from becoming abandoned. On Tuesday, the Interior Department made public a cross-agency agreement that includes the BLM, the Energy and Agriculture departments, the EPA, the IOGCC and tribal governments. The agreement details how funding decisions will be made and states that annual reports on well plugging will be submitted to Congress. The funds will begin to be allocated to states at the end of February, according to the Interior Department.

“These legacy pollution clean-up efforts will advance the Department’s goals of environmental justice by helping historically marginalized communities address the devastating and long-lasting effects of legacy pollution,” the memo stated.