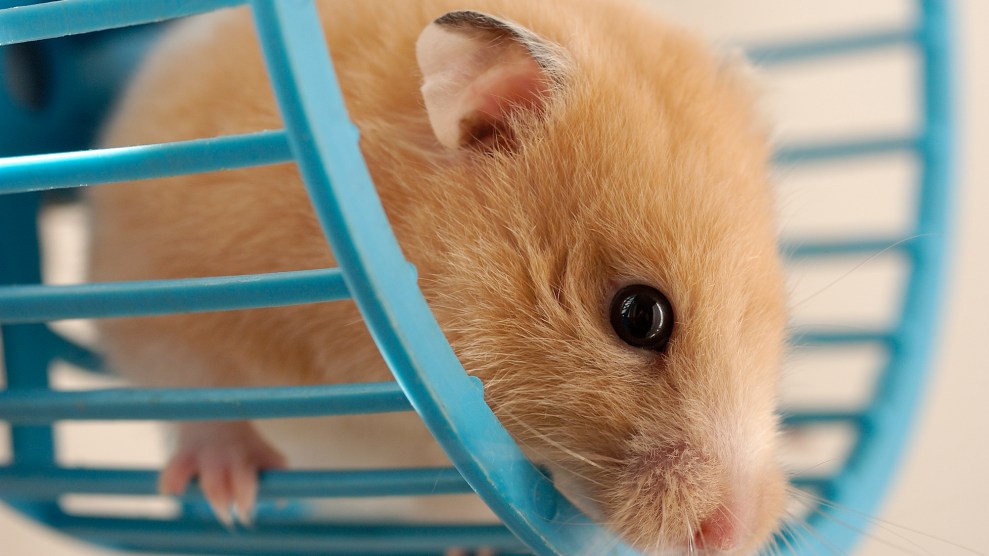 You lookin' at me? Bartolome Ozonas/Getty

In the universe of charismatic rodents, the hamster looms large. They’re great pets for kids; as emotional-support animals, they’re “adorable, portable, and convenient,” according to the website ESA Doctors.

But, in what’s perhaps another sign of our dawning dystopia, scientists have managed to use emerging genetic technology to make your friendly hamster into a hyper-aggressive tyrant. Using CRISPR Cas9, a gene-editing technique, a group of University of Georgia researchers took a bunch of hamsters and eliminated a “neurochemical signaling pathway that plays a critical role” in affecting group behavior in mammals—DNA thought to shape “social phenomena ranging from pair bonding, cooperation, and social communication to dominance and aggression,” according to the university’s press release. Shocking the Georgia team, the gene-edited hamsters emerged as bullies. Put a couple into a small cage, and it might turn into the equivalent of an MMA ring—a kind of portable Fight Club set.

The researchers figured what they did would make the fuzzy critters more passive, because they assumed the pathway, known as vasopressin, triggers conflict. “We anticipated that if we eliminated vasopressin activity, we would reduce both aggression and social communication. But the opposite happened,” the eminent neuroscientist  H. Elliott Albers, one of the study’s authors, said in the press release. In other words, they thought the modified hamsters would be more chill. Instead, they became more hostile. Oops.

Interestingly, male hamsters are prone to showing aggression to other males, but females don’t have that trait. Nixing the vasopressin pathway not only dramatically ramped up same-sex aggression among males, but it made females just as mean to each other as their male counterparts, a finding Albers called “startling.”

In addition to generating funny headlines about turning tiny cuddly pets into “rage monsters,” the Georgia study gets at an important point. Hailed for its precision, CRISPR Cas9 is an incredibly potent tool, and the Georgia study counts as an impressive display of its power.

“Developing gene-edited hamsters was not easy,” Albers said in the press release; and could not have been done without CRISPR. But it also demonstrates the limits of our knowledge of how tinkering with genes affects traits in the real world. “We don’t understand this system as well as we thought we did,” Albers said. “The counterintuitive findings tell us we need to start thinking about the actions of these receptors across entire circuits of the brain and not just in specific brain regions.”

Let’s hope scientists keep their CRISPR experiments confined to the lab until we know much more about the relationship between DNA and traits. Because what the world needs now is not more rage monsters.