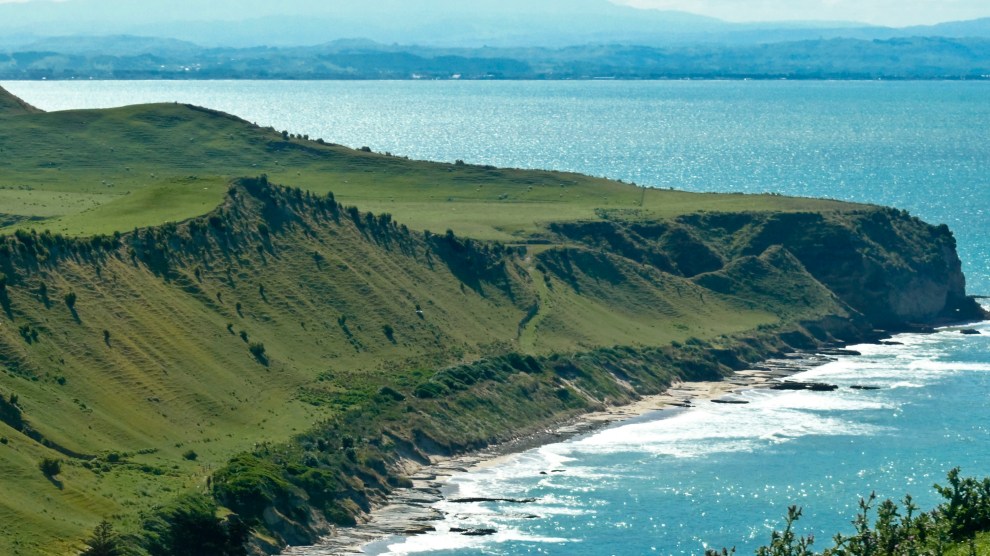 Two kilometers inland from Hawke’s Bay on the North Island of New Zealand, a dark-red gate just off the highway marks the entrance to the Tangoio Marae. This marae (meeting place) is where a local Māori hapū (community) holds regular gatherings and ceremonies. The location seems perfect: surrounded by lush green hills, close to the city of Napier, and just a stone’s throw from the ocean. But there is one problem: The marae is at very high risk of flooding. The hapū of Tangoio Marae have a serious decision to make about this place that is so central to their community, and one of their decision-making tools is unorthodox: a board game.Called Marae-opoly, the Māori community designed the game in partnership with researchers from New Zealand’s National Institute of Water and Atmospheric Research with the explicit goal of helping the hapū decide how to manage the flood risk to their marae. While the researchers from NIWA contributed scientific data about known flood risks and projected climate change effects, the hapū brought their own experiences and values to the table during game development brainstorming sessions.
“It’s quite an inclusive approach because you consider all of the different things that could be possible.”

“Brainstorming is really important,” says Paula Blackett, a social scientist at NIWA who co-designed Marae-opoly. “It allows people to express their thoughts on what could be done [to address the flood risk], and why. It’s quite an inclusive approach because you consider all of the different things that could be possible.”

A turn in Marae-opoly plays out in several steps. First, teams debate how to address the flood risk and choose to either make the marae more flood resistant by waterproofing buildings, raising the flood banks, or improving drainage works; move its location; or wait and save money. In each round, a random “rainmaker” event reflecting the real odds of extreme weather determines the rainfall for that decade. Sometimes the team is hit by a devastating flood, other times it is dry, but it is impossible to predict what will happen when. Turns go on like this until players have experienced 100 years of climate change, with the decisions they made early on compounding over time.

Once the game was ready to play, several dozen of the hapū gathered at their marae to spend a Saturday playing. It was a lively event, with teams debating their choices each turn.

“Although it was a safe environment, it actually made people realize that whatever decision they made there will be consequences,” says Tania Hopmans, chair of the Maungaharuru-Tangitū Trust, which represents the hapū of Tangoio Marae. For example, investing money early in the game to save for larger expenses could leave them at risk of higher costs due to flood damage, but spending a small amount could mean insufficient protection against bigger floods.

Games like Marae-opoly are what researchers refer to as serious games—games designed for a specific educational purpose. NIWA has been using serious games for a few years as a way for people to better understand the risks of climate change.

“Most people struggle with being able to integrate all of the different streams of information that they need in order to make robust climate change adaptation decisions in an unknown future,” says Blackett. Games make that kind of information more manageable and let people experience it at a small scale.

In the past few years, board games have been used around the world to teach a wide range of topics, from medical skills to cultural history and more. Like Marae-opoly, games can be used to model real-world environmental scenarios. For example, Azteca Chess helped Mexican coffee farmers make decisions about pest control.

According to Rebecca Bayeck, an expert on the educational value of games at Utah State University who was not involved in the Marae-opoly project, board games have inherent qualities that make them suitable learning environments. “Collaboration, mathematical thinking, computational thinking—all these skills that you will need in the 21st century—are actually found in board gaming.”

Even commercially designed games can be used educationally. For example, Pandemic, a board game in which players work together to stop the global outbreak of several infectious diseases, has been used to teach group decision-making. Recently, the game received new interest during the COVID-19 pandemic as a casual way to understand the complexity of what was happening in the world.

But why board games? Unlike video games, Bayeck sees board games as fostering a welcoming space because they facilitate in-person connections. Playing the game “invites personal interaction where you can see the face of the other [players], see their expression, ask a question,” she says.

The casual setting of playing Marae-opoly allowed the hapū to openly have difficult discussions about their options—to either stay and defend the marae from oncoming floods, or move the cultural and spiritual hub of their community. By playing the game, Hopmans says, “people can have great arguments at the table about what to do or what not to do, and the consequences came five minutes later.”

Besides facilitating debates, the game also clarified complex concepts. “One of the things that has really stood out for me is how people think about and process risks,” says Blackett.

For instance, the type of flood that is of particular danger in New Zealand is often referred to as a 100-year flood, which makes it sound unlikely to happen any time soon. The reality is that every year has an equal chance of seeing a 100-year flood, and it’s possible to get two 100-year floods back to back. Climate change is also making these extreme floods more likely.

After weighing all the options, the community made their decision for real: “We’re moving the marae.”

Marae-opoly helped the Māori community of Tangoio Marae better assess the risk to their meeting place and how their actions affected possible outcomes. It was a low-stakes trial for an important decision—and after weighing all the options, the community made their decision for real. “We’re moving the marae,” says Hopmans.

Through a stroke of luck, a local farm recently sold them a patch of land just 300 meters away from the marae’s current site, on slightly higher ground. “Over time, we still may need to move further,” cautions Hopmans, as the floods may eventually catch up with the new site. But, she adds, “at this point, we are definitely moving up the road.”

Moving a site of such cultural and spiritual significance was a tough decision, with real people and real money at stake. But playing a board game made it a bit easier to process.