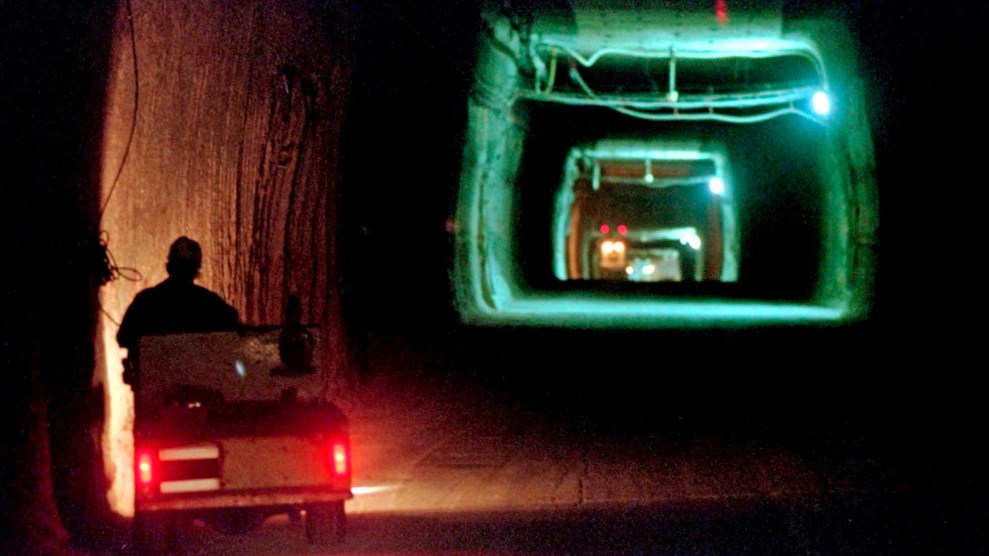 The Waste Isolation Pilot Plant near Carlsbad, New Mexico, the nation's only deep geologic repository for nuclear waste, is not suitable for storing the waste from nuclear power plants.Eric Draper/AP

Lindsay Krall decided to study nuclear waste out of a love for the arcane. Figuring how to bury radioactive atoms isn’t exactly simple—it takes a blend of particle physics, careful geology and engineering, and a high tolerance for reams of regulations. But the trickiest ingredient of all is time. Nuclear waste from today’s reactors will take thousands of years to become something safer to handle. So any solution can’t require too much stewardship. It’s gotta just work, and keep working for generations. By then, the utility that split those atoms won’t exist, nor will the company that designed the reactor. Who knows? Maybe the United States won’t exist either.

Right now, the US doesn’t have such a plan. That’s been the case since 2011, when regulators facing stiff local opposition pulled the plug on a decades-long effort to store waste underneath Yucca Mountain in Nevada, stranding $44 billion in federal funds meant for the job. Since then, the nuclear industry has done a good job of storing its waste on a temporary basis, which is part of the reason Congress has shown little interest in working out a solution for future generations. Long-term thinking isn’t their strong suit. “It’s been a complete institutional failure in the US,” Krall says.

But there’s a new type of nuclear on the block: the small modular reactor. For a long time, the US nuclear industry has been stagnating, in large part because of the tremendous costs of building massive new plants. SMRs, by contrast, are small enough to be built in a factory and then hauled elsewhere to produce power. Advocates hope this will make them more cost-effective than the big reactors of today, offering an affordable, always-on complement to less-predictable renewables like wind and solar. According to some, they should also produce less radioactive waste than their predecessors. A Department of Energy-sponsored report estimated in 2014 that the US nuclear industry would produce 94 percent less fuel waste if big, old reactors were replaced with new smaller ones.

Krall was skeptical about that last part. “SMRs are generally being marketed as a solution—that maybe you don’t need a geological repository for them,” she says. So as a postdoc at Stanford, she and two prominent nuclear experts started digging through the patents, research papers, and license applications of two dozen proposed reactor designs, none of which have been built so far. Thousands of pages of redacted documents, a few public records requests, and a vast appendix full of calculations later, Krall, who is now a scientist with Sweden’s nuclear waste company, got an answer: By many measures, the SMR designs produce not less, but potentially much more waste: more than five times the spent fuel per unit of power, and as much as 35 times for other forms of waste. The research was published in the Proceedings of the National Academy of Sciences earlier this week.

Startups seeking licenses to build SMR designs have disputed the findings and say they’re prepared for whatever waste is generated while the US sorts out permanent disposal. “Five times a small number is still a really small number,” says John Kotek, who leads policy and public affairs at the Nuclear Energy Institute, the industry’s trade association.

But the authors say the “back-end” of the fuel cycle, which includes waste and decommissioning, should be a bigger factor in what they consider to be the precarious economics of the new reactors. “The point of this paper is to prompt a discussion,” says Allison Macfarlane, a former chair of the US Nuclear Regulatory Commission and a coauthor of the paper. “We can’t get to how much it is going to cost until we understand what we’re dealing with.”

Designing smaller reactors may make them easier to build, but it also creates a problem: neutron leakage. Reactors produce energy by firing neutrons at uranium atoms, causing them to split. This sends out more neutrons, which in turn find other targets and cause a chain reaction. But some of these neutrons miss. Instead, they fly out of the core, hitting other parts of the reactor that become “activated,” or radioactive. Inside SMRs, there’s less space for the neutrons to jostle around in, so more of them leak. There’s no getting around the issue. “We’re basically dealing with gravity here, the laws of physics,” Krall says. “It’s something you have to engineer your way around.”

One fix is to encase the core in materials like steel and graphite that reflect or reduce the speed of the neutrons rattling inside. But in time, these materials are being so thoroughly bombarded with neutrons that they become radioactive themselves, and need to be replaced. In addition, some of the reactor designs include sodium or liquid metal coolants that develop their own radioactivity issues. The authors point to experimental reactors in Scotland and Tennessee, where scientists have spent decades trying to figure out how to decommission parts that have become contaminated by the cooling systems. So that was the first problem Krall’s team found: The crowded conditions inside SMRs mean more neutron leakage, but the materials needed to contain such leaks inevitably become radioactive waste.

Problem number two is the fuel. The other major workaround for neutron leakage is to use fuel that’s more highly enriched with Uranium-235—the atoms that are actually split. But the researchers estimate that even with a greater concentration of atoms to hit, these reactors will end up with higher volumes of leftover fuel, given a lower rate of “burn up.” Once spent, the fuel needs to be handled with special care. With a higher concentration of fissionable atoms in the waste, its “critical mass”—that is, the amount of material to sustain a chain reaction—declines sharply, making the waste more volatile. The result is a bigger volume of material that needs to be divvied up into smaller batches for safe-keeping.

Those varied streams of waste complicate the calculus for a permanent storage facility, which needs to be carefully designed to ensure the surrounding geology can safely sequester the material for thousands of years. “What is clearly dead-on is that you’re going to have a whole bunch of types of spent nuclear fuel, and that is going to be much more difficult to manage than having one type of fuel,” says Peter Burns, a nuclear expert at the University of Notre Dame who wasn’t involved in the research.

And Burns, for one, isn’t shocked by the magnitude of the findings, though he adds that it’s important to keep the issue in perspective. After all, SMRs are one potential solution to the climate crisis that resulted from another part of the energy industry’s failure to clean up its waste. “The back end of the coal cycle was to release all the gas to the atmosphere, and anything that didn’t fly away you put in an ash pile,” he says. “I would argue that the nuclear industry has done a fantastic job of dealing with waste, but eventually it has to be disposed of. The extent that a proliferation of SMRs will make the issue worse is real.”

Representatives for SMR builders say the calculations overestimate the amount of waste their facilities will emit, the exact size and nature of which varies by design. Diane Hughes, a spokesperson for NuScale, the reactor designer that was the subject of the paper’s most extensive analysis, says that the researchers’ assumptions lead to an overestimate of spent fuel. She adds that the company’s design, though smaller, is chemically similar to existing reactors, and doesn’t create novel kinds of waste.

Jacob DeWitte, CEO of Oklo, which hopes to build a sodium-cooled design, notes that radioactivity in the spent coolant is typically short-lived, and that the contamination issues that afflicted previous sodium-cooled reactors were specific to those designs. “This is a limited-scope analysis which is designed to point out negative comparisons,” DeWitte says. All of the companies contacted by WIRED noted that the overall volume of waste is small and can be easily stored while the US figures out a permanent solution for it.

Kotek of NEI adds that the drive to develop new reactors is also pushing the industry toward new solutions for waste, like reusing spent fuel and developing safer and cheaper methods of storage. It has also added urgency to dealing with long-term disposal, he says, noting that the Biden administration’s support for advanced nuclear power as part of its decarbonization plans has been accompanied by a push for a new office to handle waste.

One big factor that isn’t included in the analysis is the potential to recycle nuclear fuel, which could significantly reduce how much goes to waste. The authors cite concerns about other forms of waste generated by recycling processes and the failure of recycling to catch on for the current generation of US reactors, despite more success in places like France. But many SMR companies, including Oklo, have baked the idea into their business, in part to reduce operational costs and also because of the current lack of easy sources for newly enriched fuel. DeWitte says that the company also hopes to find ways to recycle other forms of non-fuel waste, like the activated steel.

And he points to ongoing work on permanent storage, funded in part by the Department of Energy. Oklo is working with another startup called Deep Isolation, which is exploring the idea of drilling boreholes deep into the ground and sending down canisters of waste. In theory, that could expand the kinds of places that could serve as repositories, since they don’t rely on finding a place with the right type of natural cavern, like Yucca Mountain.

But the pathway for making that happen—getting that method approved and then finding a place to do it—is uncertain. Macfarlane, who is now head of the University of British Columbia’s public policy school, notes that any solutions for SMR waste will run into the same pushback that Yucca Mountain did over environmental concerns. “It’s a societal problem, not a technical one,” she says. She believes both US regulators and the vendors themselves should be doing more to anticipate how waste will be handled before the reactors are approved and built to anticipate and factor in the costs. The SMR industry looks brightest to her in places that are doing a better job of figuring out long-term storage, she adds, pointing to Finland, Sweden, and the United Kingdom. “The real issue is that the US doesn’t have a plan for its spent nuclear fuel,” Macfarlane says. “I’m not feeling optimistic right now.”