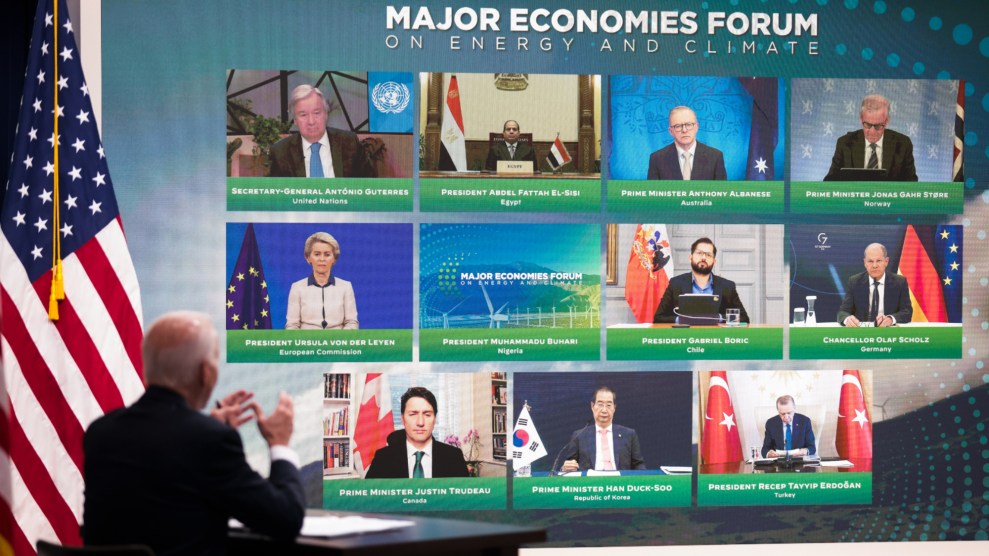 Fossil fuel companies and the banks that finance them “have humanity by the throat,” the UN secretary general has said, in a “blistering” attack on the industry and its backers, who are pulling in record profits amid energy prices sent soaring by the Ukraine war.

António Guterres compared fossil fuel companies to the tobacco companies that continued to push their addictive products while concealing or attacking health advice that showed clear links between smoking and cancer, the first time he has drawn such a parallel.

He said: “We seem trapped in a world where fossil fuel producers and financiers have humanity by the throat. For decades, the fossil fuel industry has invested heavily in pseudoscience and public relations—with a false narrative to minimize their responsibility for climate change and undermine ambitious climate policies.”

“They exploited precisely the same scandalous tactics as big tobacco decades before. Like tobacco interests, fossil fuel interests and their financial accomplices must not escape responsibility.”

Speaking to the Major Economies Forum, a climate conference organized by the White House, Guterres also castigated governments that are failing to rein in fossil fuels, and in many cases seeking increased production of gas, oil, and even coal, the dirtiest fossil fuel. He said: “Nothing could be more clear or present than the danger of fossil fuel expansion. Even in the short-term, fossil fuels don’t make political or economic sense.”

US president, Joe Biden, is traveling to Saudi Arabia to push for more oil production, some EU countries are seeking to source gas from Africa and developing countries around the world, and the UK is licensing new gas fields in the North Sea.

Governments are concerned about soaring energy prices and rising food bills. Energy experts have advised more renewable energy and improvements to energy efficiency as better alternatives, but much of their advice has been ignored.

Bumper profits resulting from war in Ukraine are likely to be invested in fresh exploration and expansion of fossil fuel resources.

The Guardian understands Guterres has been incensed by the recent behavior of fossil fuel companies, which have been reaping a bonanza from energy prices sent soaring by the Ukraine war. Much of these bumper profits are likely to be invested in fresh exploration and expansion of fossil fuel resources. The Guardian recently uncovered nearly 200 new projects—”carbon bombs”—that if completed would put paid to the world’s chances of limiting global temperatures to 1.5C above pre-industrial levels.

Guterres is understood to be furious that, six months after the Cop26 climate summit, and after three dire reports from the Intergovernmental Panel on Climate Change—the “starkest warning yet” from climate scientists—countries and businesses are ignoring the science and squandering opportunities to put the world on a greener path, when renewable energy is cheaper and safer than fossil fuels.

The International Energy Agency warned last year that all new exploration and development of oil, gas and coal must cease this year to hold to the 1.5C threshold.

A senior UN official told the Guardian: “Even given the secretary general’s impressive track record of speaking truth to power, this is a blistering intervention, to the leaders of the world’s largest economies. The fossil fuel industry is taking a page out of big tobacco’s playbook, and that is utterly unacceptable to the secretary general. He’s determined to call out the fossil fuel industry and its financiers, and he won’t be constrained by any diplomatic niceties.”

The official added: “For the secretary general, this is the fight of our lives, and he won’t take a backwards step.”

The latest round of UN talks on the climate crisis, intended to pave the way for the next major summit, Cop27 this November in Egypt, ended without much progress in Bonn on Thursday evening. The outgoing UN climate chief, Patricia Espinosa, warned there was “still a lot to do” before Cop27, where countries are supposed to make good on promises made at Cop26 to strengthen their emissions-cutting plans in line with the 1.5C limit.