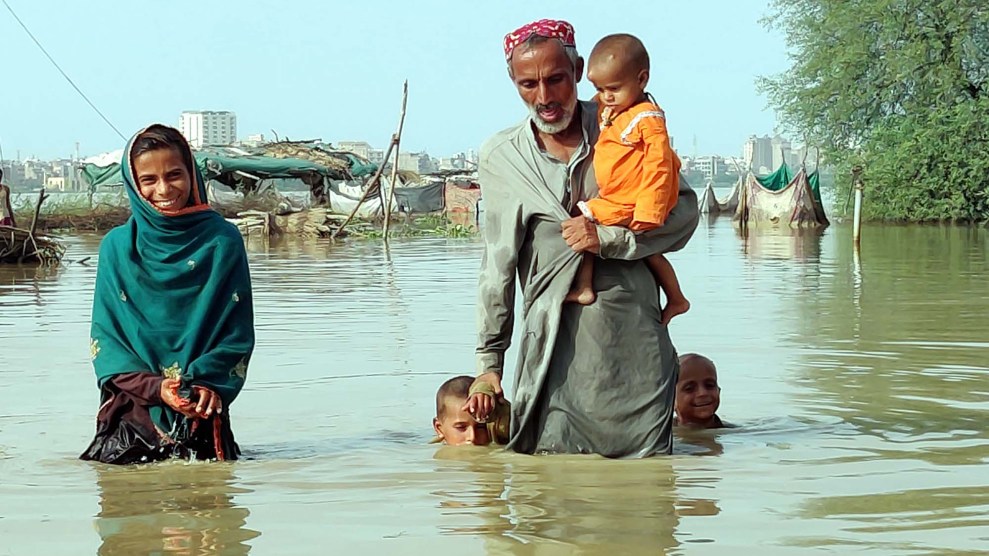 A family navigates floodwater on Monday after a monsoon downpour in Sukkur, Pakistan.PPI via ZUMA Press Wire

The UN secretary general, António Guterres, has warned that Pakistan is facing a “monsoon on steroids” as the government issued more flood warnings for the next 24 hours.

Heavy rains over two months have caused the worst flooding in more than a decade and damaged more than 1 million homes.

Guterres said on Tuesday that south Asia was a hotspot for the climate crisis and that the catastrophic flooding in Pakistan that has left tens of millions needing help was a warning to every nation of the destruction wreaked by human-caused global heating.

“The Pakistani people are facing a monsoon on steroids—the relentless impact of epochal levels of rain and flooding,” he said. “It breaks my heart to see these generous people suffering so much.” The UN has issued an urgent appeal for $160 million to provide help.

“I will leave my home town after I leave the luggage and other stuff on the rooftop.”

“People living in these [climate crisis] hotspots are 15 times more likely to die from climate impacts,” Guterres said. “As we continue to see more and more extreme weather events around the world, it is outrageous that climate action is being put on the back burner, putting all of us, everywhere, in growing danger.”

In Pakistan, Balochistan and Sindh provinces have had more than four times the average rainfall of the last three decades

Majid Ali Bughio, 30, left his home town in Sindh with 20 extended family members in the early morning on Monday after they heard of breaches in a nearby embankment

Bughio said by telephone that he had asked his family members to go towards Karachi, as many parts of Dadu and Badin districts were under water. “We need ration, food, medicines and emergency help from the Sindh government and the government must help us to vacate. We have been left on our own,” he said. “More than 70 percent of the population in the [wider city of Khairpur Nathan Shah] have left. The shops and all bazaars are deserted and many villages are underwater.”

Flash floods fueled by the climate crisis have affected more than 33 million people, officials have said. The National Disaster Management Authority said on Monday the death toll from the monsoon rains and floods in Pakistan had reached 1,136—with 75 killed in the last 24 hours. The NDMA said that more than 1 million houses had been damaged.

In an immediate warning issued on Tuesday, Pakistan’s Flood Forecasting Division said that over the next 24 hours a very high level of flooding was likely to continue in the Kabul River, which flows into Pakistan’s Indus River.

The Indus highway, in Sindh, was submerged under two feet of water. The highway connects Sindh with Punjab and Balochistan provinces.

A video shared by residents showed a coach that had slipped on the highway while water was flowing and authorities were involved in the rescue of passengers. Local people say there were no casualties.

The local media reported that there was a rise in waterborne diseases in Sindh and other parts of Pakistan. In some parts of Sindh, there has been a 100 percent increase in diseases.

The flash flood triggered by an abnormal monsoon has washed away bridges, roads, houses, livestock and people across the country.

Gul Hasan, 38, in Khairpur Nathan Shah, had sent his three children and wife to upper parts of Sindh, while he stayed in his home town. He said: “I did not leave because after some of my neighbors had left yesterday, people barged into their houses and stole their belongings.”

“This is so sad at this hour of calamity we are witnessing such issues. I will leave my home town after I leave the luggage and other stuff on the rooftop and water comes to the city completely and I know that now no one can steal our decades of savings.”