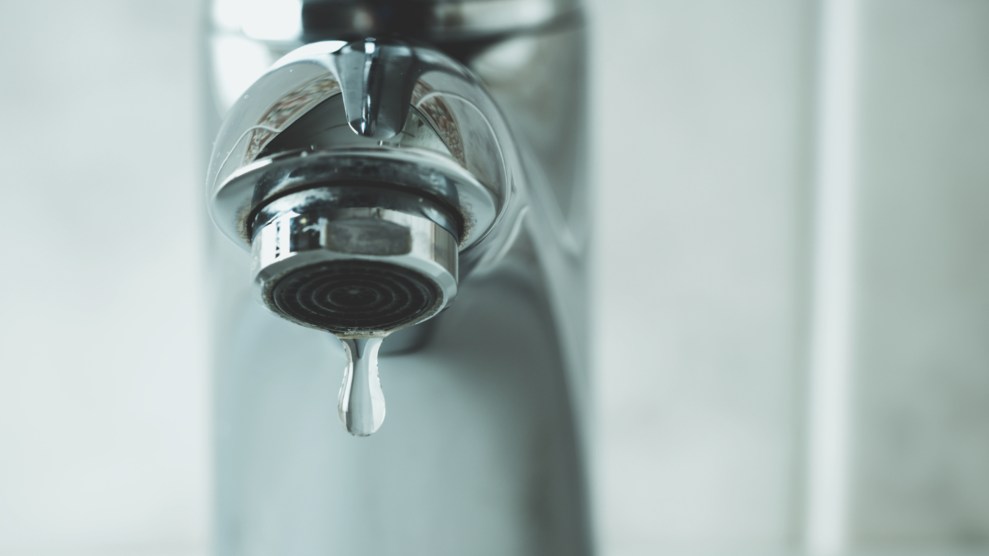 I can’t forget to turn the kettle on before bed. In the morning, I’ll need that water to wash my hands and brush my teeth. The rest I’ll carefully store in the fridge, away from light and bacteria. It’s a routine I shared with at least 1,500 neighbors—for the better part of a week—when E. coli bacteria tainted West Baltimore’s water, bringing risks from stomach bugs to lethal kidney disease. Welcome to life without clean, running water.

Across the country, extreme weather is accelerating breakdowns decades in the making. Storms are battering old water and wastewater networks, many with parts built a century ago or more for vastly different climate conditions. Floods are overwhelming existing facilities, sometimes contaminating water at the source.

Baltimore officials still can’t pinpoint a cause, but storms caused dire flooding here in August, and that’s contaminated the water before. Such storms are getting more common and less predictable, with climate change the likely reason. Rising sea levels make coastal floods even more dangerous, despite mitigation plans. A 2019 storm even flooded our harbor with more than a million gallons of sewage. And Baltimore is far from the only example.

Running water is everything, which you don’t realize fully until you’re without. Your morning coffee? Bottled or pre-boiled water. Pets? They need theirs bottled or boiled, too. Showers? Fine, if you keep your mouth closed throughout. But that’s harder for kids, and the CDC recommends using bottled or boiled water (cooled first!) to bathe them. Are you one of the lucky few who found powdered infant formula? Don’t forget to use bottled water, too. But city officials, after telling us to do just that, set up exactly three bottled-water pickup spots for everybody at risk.

This is all more likely to sound familiar if you live in a largely Black or Indigenous zip code. In Nevada, a recent report found that the number of Native families without indoor plumbing is actually increasing, and there remain Indigenous communities from South Dakota to Alaska without running water at all. Residents of Jackson, Mississippi, endured close to two months under a boil-water notice that was lifted last week.

Jackson’s water system was already subject to a 2012 EPA consent decree. Its pipes and sewers are riddled with breaks, driving sewage problems that, despite the decree, only got worse. Torrential rainfall in July, which led to floods at a water treatment facility, were the final straw. A broken pump left thousands of residents with undrinkable water—or none at all. My five days were a breeze by comparison.

Much of the wider national water system traces to massive, state-funded postwar development projects, or retrofits to meet the new standards of the 1972 Clean Water Act. But the lifespan of a typical drinking water plant is 60 to 70 years. A 2020 report from the American Society of Civil Engineers says we’re in a “replacement era”: most drinking water pipes in the country need to be repaired or replaced by 2040. In 2019, ASCE found, we’d have needed $129 billion in public funding to stay on track—but “total capital spending on water infrastructure at the local, state, and federal levels was approximately $48 billion,” leaving a gap almost double the size.

Water, it turns out, can’t flow unless cash does. You need “continual funding, so that you can have projects planned,” explains Natalie Exum, an environmental health scientist at Johns Hopkins University. Projects like water-source protection, reliable drinking water treatment, and installing new piping are how communities avoid the reactive “band-aid” projects that you’re stuck with in a crisis.

We already pay a high price for disinvestment. Some six billion gallons of treated water—imagine 9,000 swimming pools—are lost daily to broken water mains. Meanwhile, from 1977 to 2017, federal spending on water infrastructure fell from 63 percent to just 9 percent of total need. Another study found that closing the roughly $81 billion water infrastructure underfunding gap could generate up to $200 billion in economic activity, and as many as 1.3 million jobs.

The same principle holds at the household level: if you can spend in advance, you’ll be much safer. Most people can’t. In almost every way, I was unusually prepared. After begging our landlord for months, I got a dishwasher with a sanitize cycle—but many neighbors didnt, and had to wash dishes in any boiled water they could spare. I’ve reported on too many climate and water disasters not to keep a large Costco pack of bottled water at home, and my partner is the son of doomsday preppers, so we have food-safe containers and water filters in the closet.

But E. coli first appeared in Sandtown-Winchester, an almost entirely Black neighborhood now best known as Freddie Gray’s home. One-third of its row houses are empty; one-third of people living there are in poverty. And emergency preparation isn’t too cheap. (The public school where my partner teaches didn’t have to change a thing—its water was already unsafe, thanks to lead pipes.)

Austerity gets expensive sooner than later. The infamous Flint, Michigan, water crisis started with a plan to save $5 million by making the Flint River the city’s main water source. Its costs have been almost unimaginable: $626 million to help treat some 20,000 children exposed to dangerous levels of lead, $53 million in legal fees alone. Then there are the social and economic knock-on effects—among them, kids coping with lead-based brain damage are more likely to age into worse jobs, less money, and higher odds of arrest and criminalization. That still leaves the unquantifiable value of human life. By CDC estimates, low-level lead poisoning took about 1760 years of healthy life from Flint’s kids.

The Biden Administration is trying to fill some of the underlying holes. Its Infrastructure Investment and Jobs Act sets aside EPA funding for water programs to the tune of $50 billion over five years, the largest contribution to water infrastructure that the federal government has ever made. More than $20 billion will go to safe drinking water, and another $15 billion to replacing lead pipes. Even that pales next to some of the bill’s spending, and it’s a drop in a well that we’ve been depleting for decades. But its spending on water does include earmarks for underserved communities and those most at risk, bringing them an estimated 40,000 jobs.

Our crisis in Baltimore overlapped not just with Jackson’s, but another in a Manhattan public housing complex, where 2,600 people went eight days without water after now-disputed tests surfaced arsenic. A month earlier, 130,000 Michigan residents went a hot August day without water when a main failed. All evidence points to the likelihood that we’ll see more boil-water notices and system disruptions each year.

Water failures and natural disasters are closely tied, one of many relationships that mean we can’t tackle climate and infrastructure separately—or guard public health without deep investments in both. “You want to have those water notices be short-lived, so that you can still maintain the public’s trust,” says Exum, the environmental scientist. “But the more frequently it’s happening, the harder it is to trust the system.”