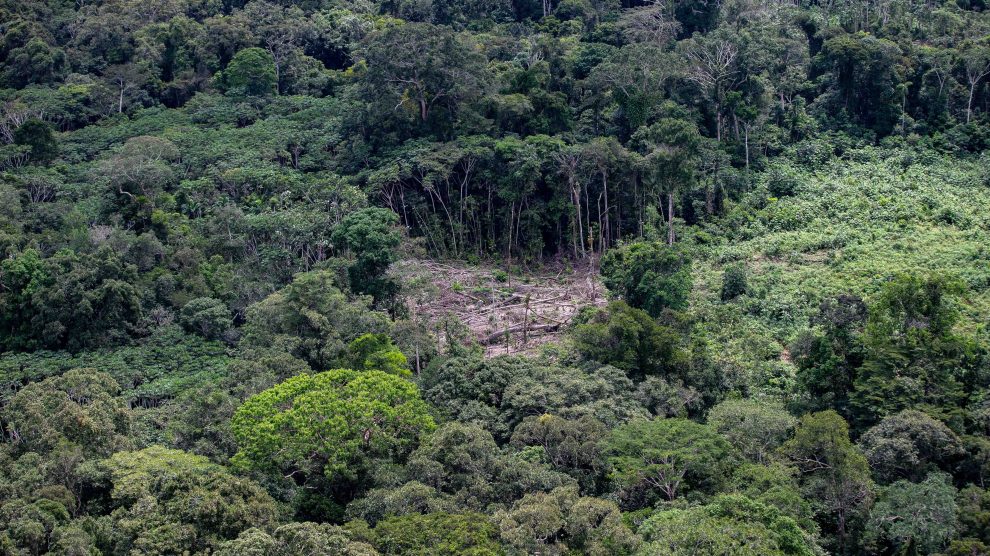 Illegal deforestation in the Amazon rainforest in the upper Rio Negro, Amazonas state, near the border with Colombia. Paulo Lopes/ZUMA Wire

Government satellites show a 562-square-mile area of rainforest was destroyed in September, as environmental criminals raced to wreck the region before a possible change of president could bring Jair Bolsonaro’s era of destruction to an end.

The Climate Observatory watchdog said that figure was up nearly 48 percent compared with last September and on a par with the destruction wrought in September 2019, the first year of Bolsonaro’s far-right administration. August saw a 81 percent rise in deforestation.

More than 2 billion trees were killed over the last four years, Sumaúma reported, and up to 3.8 million monkeys and 90 million birds killed or injured.

The number of Amazon fires rose 147 percent compared with September 2021, with more than 41,000 blazes detected by satellites. “This is a very dangerous moment,” warned Marcio Astrini, the Climate Observatory’s chief executive. “The Bolsonaro government is a forest-destroying machine.”

Astrini said Friday’s grim figures exposed how criminal syndicates of illegal loggers and ranchers were scrambling to clear the rainforest before Bolsonaro could be voted out of power in the second round of Brazil’s presidential election on October 30. Bolsonaro lost the first round to his leftist rival, the former president Luiz Inácio Lula da Silva, but received more votes than forecast by polls.

“They can see that their president could lose the election so they’re taking advantage of this final stretch of Bolsonaro to tear down everything they possibly can,” Astrini said.

Deforestation has soared under Bolsonaro, a pro-development nationalist who has slashed environmental regulations, debilitated the government agencies tasked with protecting the Amazon and incentivized the invasion of Indigenous lands. More than 2 billion trees have been killed over the last four years, the Amazon newsletter Sumaúma reported last month, as well as up to 3.8 million monkeys and 90 million birds which may have been killed, injured or otherwise affected.

Violence against Indigenous communities and environmentalists has also increased, a reality laid bare by the murders of Guardian contributor Dom Phillips and the Brazilian activist Bruno Pereira in June.

Astrini said Bolsonaro’s defeat was essential to efforts to slow such destruction and protect the global climate, given the Amazon’s crucial role as a carbon sink. ”If [this government] is given another four years the Amazon’s future will be uncertain,” he said, noting that 2022 had already seen 4% more deforestation than 2021 – and there were still three months to go.

“What’s at stake here is either us continuing to have any hope that the Amazon can be kept from collapsing – or definitively surrendering it to environmental criminals,” Astrini said.

Lula, who managed to reduce Amazon destruction during his 2003-2010 administration, has vowed to revive protection efforts, stamp out illegal gold-mining and create a ministry for native peoples, if elected. In August, the veteran leftist told foreign journalists he would make the climate crisis “an absolute priority” although critics say Lula was far from an environmental saint given his construction of the Belo Monte mega-dam.

Reports in the Brazilian media suggest that if he beats Bolsonaro, Lula will call an immediate climate summit in an effort to restore Brazil’s international credibility, obliterated, like the Amazon, during Bolsonaro’s four years in office.