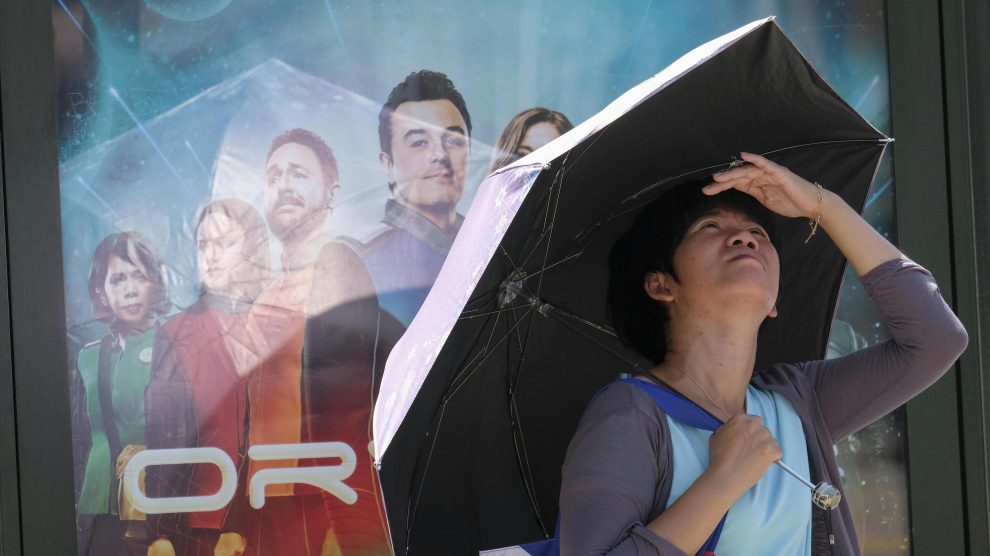 A woman shields herself while waiting for a bus in Los Angeles during a 2017 heat wave.Zhao Hanrong/Xinhua/ZUMA

In the late 1970s, a physicist and textiles engineer in Texas named Robert Steadman published a paper called “The Assessment of Sultriness.” The title reflected an unpleasant sort of steaminess—how temperature and humidity combine to make life hard on the body. To do it, he drew on a long history of experimentation. In the 18th century, people climbed into ovens warmed to 250 degrees Fahrenheit to see how long they could suffer, as they watched steaks cook beside them. In the 19th and early 20th centuries, researchers observed people sweat in Turkish baths and reported from mines where they measured the ambient conditions as workers collapsed from heat exhaustion. Later on, the military picked up more of the testing, deriving equations for how blood flow, sweat, and breathing respond to atmospheric extremes.

What was unique to Steadman was his intimate knowledge of clothes; he was known for projects like a universal sizing system for garments, and motors that could spin fine cotton yarn. After all, he theorized, people are rarely naked in the heat, so our perception of it must be mediated by a combination of physiology and clothing. His formulas assumed precise percentages of how much skin would be covered with fabric, and how specific mixes of air and fiber would transfer heat from the air.

Researchers David Romps and Yi-Chuan Lu found that the heat index model underestimated the severity of the most intense heat waves—sometimes drastically.

What’s surprising is that, for a set of calculations developed by a textiles researcher, Steadman’s measure of sultriness proved useful for weather forecasters, especially in the United States. In 1990, a scientist at the National Weather Service adapted them with Steadman’s key features more or less intact. Henceforth, the sultriness index came to be known more (or perhaps less) pithily as the “heat index,” though it’s also sometimes called the “apparent temperature” or “real feel.” If you have been caught in this summer’s heat waves, this is likely a number you have consulted to better understand the torturous outdoors. It’s the measure that’s supposed to include an overlooked factor in the human experience with heat: humidity. That wetness in the air slows the evaporation of sweat off your skin—a key way of staying cool.

What made Steadman’s index successful was that the numbers felt right, in a literal sense. The heat index reads like a temperature, but it’s wobblier than that, a perception rooted in physiological reality. When two different combinations of heat and humidity result in the same heat index—say, 96 degrees Fahrenheit/50 percent humidity and 86 degrees/95 percent humidity, which both have a heat index of 108—this is meant to signal that the body in each scenario is under a similar level of stress as it tries to cool down. As the heat index rises, the miracle of internal thermoregulation that fixes our bodies at 98.6 degrees begins to crumble. Our core temperature rises, which starts off as unpleasant and then gets dangerous. There’s a roughly 10 degree window before all the chemistry that sustains life begins to fail. That means death.

But there’s a problem with Steadman’s calculations: They weren’t actually built to handle those sorts of extreme conditions. At a certain threshold—one that includes a plausibly steamy combination of 80 percent humidity and 88 degrees Fahrenheit—the heat index veers into predicting what David Romps, a physicist and climate scientist at the University of California, Berkeley, calls “unphysical conditions” that rarely happen in the lower parts of atmosphere. This includes supersaturated air making contact with the skin—that is, air that’s more than 100 percent saturated with water.

Temperature and humidity conditions beyond that threshold are somewhat rare—and when they do happen, it’s possible to extrapolate from Steadman’s model to come up with an estimated heat index value. But estimates are estimates, and those kinds of heat waves are becoming more common as temperatures rise. So Romps and his graduate student, Yi-Chuan Lu, began taking a look at the model’s fundamentals. They quickly realized that, for the long list of assumptions in the equations, certain things were missing. For one thing, there is a natural solution to the supersaturation problem: When the air is too wet for human sweat to evaporate, it can still bead and drip off the skin, providing some relief.

With the relevant variables tweaked, the pair noticed a clear pattern: The heat index model was underestimating the severity of the most intense heat waves—drastically, in some cases. When applied to the infamous 1995 Chicago heat wave, the updated model spat out a revised heat index of 154, much higher than the original predicted peak of 135. That underestimate would help explain the severity of the crisis, which killed more than 700 people. An Associated Press article covering a mass burial, the largest in the county’s history, describes impoverished Chicagoans caught unexpectedly in their oven-like homes.

That’s why, even though heat indexes of 135 and 154 both appear abstractly high, no one should get hung up on the idea that “hot is hot,” Romps says. After all, the heat index is supposed to say something about the body and the level of danger. Distinctions at the extremes matter. Indeed, a year after the heat wave, a group of scientists chastised the city for failing to send more urgent warnings to Chicagoans that would have pushed people to seek out cooler shelter and water.

“If I had a choice of which metric to use, the heat index would be near the very bottom,” says climatologist Matt Huber.

But it’s here that the usefulness of the heat index again retreats into murkiness. A common way of visualizing the heat index is as a color-coded chart that tracks the growing toll on the body. But some have argued those categories are suspect. In 2020, lawyers for the US Postal Service argued for the invalidation of five citations brought by the Occupational Safety and Health Administration for alleged failures to adequately protect workers from heat. There was not enough scientific evidence, they said, to tie “extreme danger” from heat disorders to a particular range of heat index values. “Where did the legends and color-coding come from? I had to dig that out,” says Arthur Sapper, one of the lawyers who represented USPS. “I found out that they originated from an unlikely place: not a peer-reviewed scientific journal but a popular magazine called Weather Magazine.” The judge agreed.

That reflects how niche the heat index really is, says Matthew Huber, director of the Institute for a Sustainable Future at Purdue University. Though second nature to US forecast consumers, it’s mostly unknown to the rest of the world. And in scientific circles, it’s not held in the highest regard. Much of the research done on physiological responses to heat is instead tied to other scales, such as the wet bulb globe temperature (WBGT), which includes factors like wind variability and solar radiation that the heat index leaves out for simplicity. “It has a very sound physiological basis and a very sound empirical basis,” Huber says.

One reason the heat index has stuck around is that measuring those extra variables involves cumbersome tools that aren’t available at most weather stations. And WBGT is also trickier to read, because the readings don’t map as closely to our understanding of humidity-free temperature. But ideally, we’d learn. “If I had a choice of which metric to use, the heat index would be near the very bottom,” Huber says.

Another issue for the heat index is that it imagines a particular kind of person inhabiting particular conditions: someone who’s healthy and a specific height and weight, and who has easy access to water and shade. And because humidity isn’t measured everywhere, heat index measurements aren’t geographically precise either; in some places, like a vast stretch of Eastern Oregon, there’s only a single weather station that measures it. “We don’t really know what we’re experiencing on a day-to-day basis just under our noses,” says Vivek Shandas, a professor who studies climate adaptation at Portland State University and has been developing strategies for more localized measurements.

That’s one of the reasons why agencies like the National Weather Service have been testing other approaches, such as a “heat risk” system that categorizes heat waves according to additional local factors like the likeliness of power outages and the unusualness of the weather. But scientists like Huber and Romps say they haven’t yet seen information to determine the accuracy of those measurements and how they match up with human physiology. “There’s 10 ways they could do this wrong,” Huber says. (The NWS didn’t reply to questions about how it calculates the heat risk categories.)

In the meantime, both Shandas and Huber say it’s good to be figuring out better math for the heat index, especially at the extremes. The world is only getting more sultry, and the heat index is sticky in the American consciousness. That’s especially true in places east of the Rockies, where humidity reigns in the summers—and not just in the Deep South, but the Midwest and mid-Atlantic too. “I can talk trash about the heat index,” Huber says. “But actually, this will make a difference as we start going into this warmer world.”