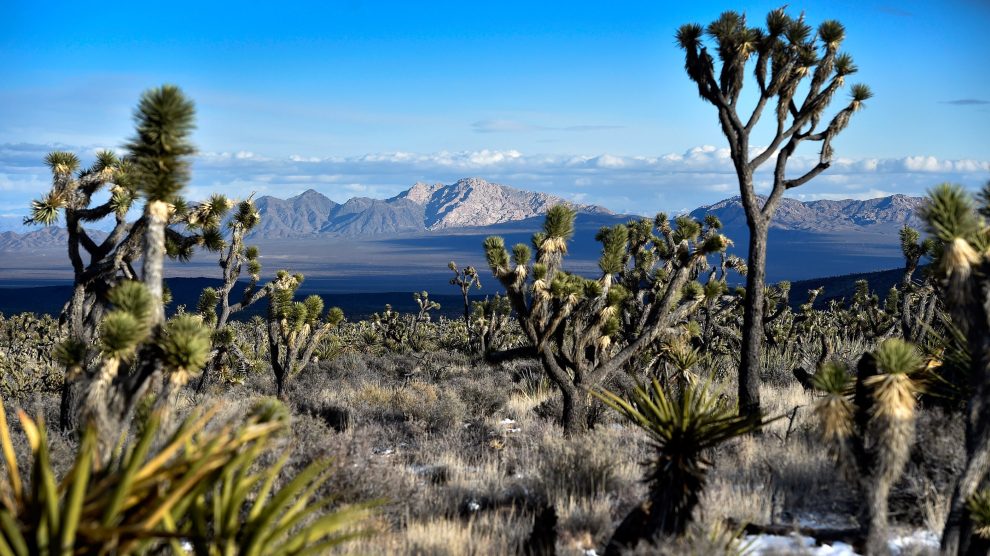 Spirit Mountain is seen across the desert from an area near the Castle Mountains, Nevada. David Becker/ZUMA

Ammon Bundy only got 17 percent of the votes in the Idaho governor’s race. Phew, I thought. What a relief. Then: Wait, 100,000 people voted for Ammon Bundy? Yikes!

That sorta sums up the 2022 midterm elections: Western voters generally chose pragmatism over ideology, moderation over extremism, and competent governance over outright lunacy, drawing a collective sigh of relief from most reasonable folks. Voters appear to care about climate change, they don’t want oil and gas companies running roughshod over the landscape, and they’re still in favor of protecting public lands.

At the same time, a fairly deranged guy who played a leading role in not one but two armed insurrections against the federal government was not only on the ballot, he even received a substantial number of votes. The radical right-wing MAGA faction of the GOP clearly endures and even dominates parts of the West. Still, if I were a political strategist for either party in Washington, DC (yeah, right), I’d be urging my clients to look west right now and take heed of a few major themes from this year’s vote.

Public lands won—even when they lost.

When President Joe Biden called to congratulate victorious Colorado Democrats after the election, he wore a hat commemorating his October establishment of Camp Hale-Continental Divide National Monument. It was fitting, since the designation likely helped Democratic Sen. Michael Bennet—a public-lands champion with a 90 percent lifetime score from the League of Conservation Voters—trounce his challenger, Republican Joe O’Dea. Also:

But even in these losses there is cause for optimism. Zinke spent a good portion of his candidacy trying to get Montana voters to forget his time as Trump’s Interior secretary, during which he outdid most of his predecessors when it came to eviscerating public-lands protections. Despite his devotion to industry, he has long preferred to describe himself as a Teddy Roosevelt-esque conservationist. Maybe now that he’s no longer under Trump’s thumb, he’ll begin to walk the talk.

Boebert’s razor-thin margin in a Republican-leaning district against a well-to-do, relatively unknown Aspen moderate, shows how unpopular she has become. It’s worth noting that in the election run-up, Boebert came out in favor of Bennet’s bill to establish a Dolores River National Conservation Area to protect the western Colorado watershed. Perhaps she sensed that even Republicans rather enjoy being able to hike and hunt and fish on un-industrialized public lands.

Voters want some limits on oil and gas development

Republicans spent the past several months weaponizing high gasoline prices, trying to pin them on the Biden administration and on Democratic energy policies. They claimed that Biden’s cancellation of the Keystone XL pipeline and oil and gas leasing pause and proposed methane rules stifled production. Although this is untrue—federal policies do little to affect the global petroleum market—the approach worked: Historically, high fuel prices tend to hurt whichever party controls Congress and the White House.

If that gas-price shtick were to play anywhere, it would most likely be in New Mexico, where oil and gas related revenues account for as much as one-third of the state’s budget. Yet it didn’t happen. Instead, Democrats swept nearly every up-ticket race in what can only be called a blue tsunami:

Despite the Republican rhetoric, New Mexico’s oil and gas industry has never been healthier than it is today, under state and federal Democratic control. Oil production from the Permian Basin hit an all-time high of about 5 million barrels per day, and the state is looking at a second consecutive year of record oil- and gas-related revenue. The industry, unlike consumers, thrives when oil prices are high, a fact that Republicans sometimes forget.

New Mexico Democrats also have learned to govern delicately when it comes to energy. Lujan Grisham has helped wean the state off coal-generated power and established safety nets for workers and communities affected by the energy transition. She also tightened oil and gas regulations and stepped-up enforcement as a way to fight climate change. But she’s certainly no keep-it-in-the-grounder, and she is an enthusiastic booster of methane-derived blue hydrogen, which could help revive the beleaguered natural gas industry in the northwestern part of the state. Vasquez is a die-hard conservationist, but when it comes to oil and gas he says he’ll take a “balanced” approach, defying GOP attempts to paint him with a greener brush.

This sort of balance—which tends to make environmentalists cringe—appears to be a political winner. In California, Gov. Gavin Newsom was easily reelected. Newsom wants to phase out oil and gas drilling in the state as well as petroleum-powered cars. But he’s also pushing to keep California’s last nuclear plant and its natural gas plants running beyond their planned retirement dates to shore up the climate-change-strained power grid.

Similarly, Democratic Rep. Mary Peltola—who ran on a “pro-fish, pro-family and pro-freedom” platform—beat Sarah “Drill, Baby, Drill” Palin to represent Alaska in Congress. Peltola, who earlier defeated Palin in a special election, supports oil and gas development within limits and has even come out in favor of ConocoPhillips’ massive proposed Willow drilling project in the Alaskan Arctic.

Extremism doesn’t fly in (most of) the West.

If there was one across-the-board loser in these midterms, it was the Trump school of extremism. The MAGAs ran a slate of raucous , er, outspoken candidates across the region, from Bundy in Idaho to Kari Lake in Arizona, who parroted Trump and bashed old-school GOPers Rep. Liz Cheney and the late Sen. John McCain during her run for governor. Very few succeeded. Bundy was bashed by incumbent Republican Gov. Brad Little, and Lake lost to Democrat Katie Hobbs, who supports clean energy, tribal sovereignty, rational immigration reform, and economic justice. (Lake, of course, refuses to concede).

Other MAGA losses include:

From a distance, Wyoming seems like a MAGA stronghold through and through. After all, Hageman decisively deposed arch-conservative Rep. Liz Cheney in the primaries only because of Cheney’s lack of fealty for Trump.

But consider, for a moment, Gov. Mark Gordon, who easily won reelection. He’s a Republican and a conservative—but a conservationist? Well, no, he’s not what you’d call an environmentalist in, say, Colorado. But for a Wyoming Republican he is surprisingly moderate on green issues.

Sure, Gordon denounced the Biden administration’s moratorium on oil and gas leasing, calling it “draconian.” But he also acknowledges anthropogenic global warming and touts carbon capture and wind, solar, and nuclear power as means to fight it. Gordon tepidly supported Trump, but condemned the Jan. 6 invasion of the US Capitol. (Earlier this year, the former president dissed Gordon on a Wyoming radio show for failing to adequately support him.)

Gordon’s background has a greener tint to it than he lets on during campaign seasons. (Fun fact: He actually served on the High Country News Board of Directors from 2000-2004, as did Idaho Gov. Brad Little during the 1990s.) Gordon was also the treasurer of the national Sierra Club, where he fought coalbed methane drilling. In scathing comments opposing a plan to drill in Wyoming’s Shoshone National Forest in the 1980s, Gordon wrote: “Does it make sense to impair the wild value of these potential additions to the Washakie and North Absaroka Wildernesses? Is it worth it?”

Hageman, along with Trump-endorsed Foster Friess, challenged Gordon in the 2018 primaries, and hard-liner Rex Rammell went after him this year for being inadequately conservative. But Wyoming voters were not impressed. According to a Morning Consult poll conducted this summer, Gordon is the most popular governor in America. That’s in spite of—or most likely because of—his relatively middle-of-the-road ways.