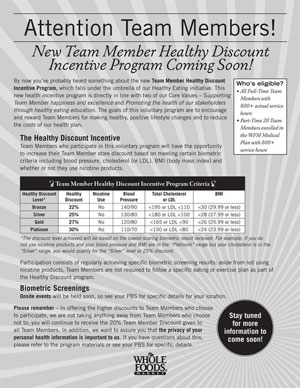 The idea that Whole Foods Markets might not be as wholesome as consumers assume isn’t really news. Kate Sheppard recently reported that the grocery chain earned a 27 out of a possible 100 rating on its sustainable business practices according to a recent report, and CEO John Mackey is a climate change skeptic. An August op-ed in the Wall Street Journal by Mackey against healthcare reform led some consumers to call for a boycott. But Mackey’s most recent antics have angered not only those in favor of healthcare reform, but also consumers who care about privacy issues and body policing.

According to documents received by Jezebel, employees who participate in Whole Foods’ new Team Member Healthy Discount Incentive Program will be ranked according to BMI, cholesterol, blood pressure, and nicotine use. While all Whole Foods employees receive a 20 percent store discount, those who achieve the “Platinum” level in the program by having low results in all four metrics get bumped up to a 30 percent discount. But it’s not just employees’ lifestyles that count. The program also rewards employees simply for having good genes: Non-smoking employees who have a BMI under 24 (18.5-24.9 is considered normal), but have inherited high cholesterol, will be relegated to “the lowest-scoring biometric” and will have to make due with a 27 percent discount. Employees who do not meet Platinum requirements for other health reasons (like diabetes) are similarly out of luck.

Documents state that the initiative is “directly in line with two of our core values—supporting team member happiness and excellence and promoting the health of our stakeholders through healthy eating education.” While it’s common knowledge that not smoking and having lower blood pressure and total cholesterol can lead to better health, it seems a bit much to assume that hitting the questionable BMI metrics will lead to happy and healthy employees. Good thing Mackey doesn’t have to worry about employee unions collectively questioning the new policy, since those, like high BMIs, are frowned upon.

In a letter sent out to employees, Mackey states that the program is being implemented to lower rising healthcare costs for both Whole Foods Markets and its employees. Mackey might do better working towards real health care reform—policies that could lower costs for all US employers and individuals—rather than whittling the waistlines of his employees.