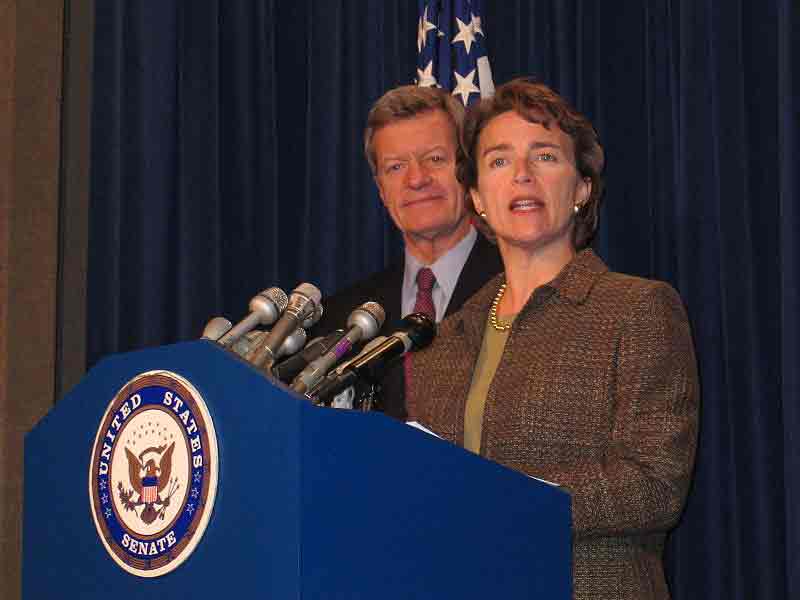 Sen. Blanche Lincoln (D-Ark.) is generating plenty of buzz in financial circles for her new bill to regulate derivatives, those tricky financial products, whose value is linked to the price of commodities or interest rates, used to hedge risk and also make risky gambles. Lincoln’s ambitious derivatives reform bill would require nearly all derivatives trades to take place on an exchange, where details on prices and the make-up of the deals would be transparent. (Right now, these deals take place essentially in the dark, between buyers, sellers, and brokers who privately negotiate the terms of the deal. That makes it practically impossible for, say, an airline company buying a contract to hedge against fuel price increases to look at similar deals done before and get a sense for what it should pay.)

As Felix Salmon pointed out, if derivatives will be exchange-traded, that means they’ll be cleared, too, i.e., the risk of default on those deals will be distributed across the many members of the clearinghouse, instead of falling all on one counterparty. It essentially protects against another AIG-esque collapse, when billions in derivatives losses were absorbed by the global insurer leading to its near-demise.

Lincoln’s bill would also call for swaps outfits to be cut out of big investment banks and essentially made into separate operations. This, of course, would prevent crippling losses on a swap desk from dragging down the rest of the firm—again, a la AIG’s Financial Products division mortally wounding the entire company. Lincoln would also make a narrow exemption for specific end users of derivatives—the airlines and farmers and utility companies looking to legitimately hedge risk—without letting the speculators squeeze through that exemption.

So, that’s all great, right? If you support tough new derivatives reform—like many Congressional Democrats; Gary Gensler, chair of the Commodity Futures Trading Commission and the top administration officlal overseeing derivatives; and reform advocates—then you’re ecstatic. If you’re Wall Street, then you’re pissed. Don’t be surprised to see the likes of Goldman Sachs and Morgan Stanley—whose profits would likely diminish with exchange trading and clearing (with price transparency and competition, they can’t set prices to their liking and rip off clients)—lobby furiously to kneecap Lincoln’s bill.

As tough as the bill is, realistically, it’s even tougher to envision it surviving the gauntlet of special interests and GOP lawmakers. Here’s Felix on it:

…it’s also pretty clear that none of this is going to happen. Never mind Republican support: this is going to have a hard time even getting Democratic support. It’s all a good idea, but it’s far too radical: while it might have had more of a chance if it had been introduced during the height of the crisis, at this point the banks have got their mojo working again and will quite easily be able to ensure that the beating heart of Lincoln’s proposals is surgically excised before it even gets anywhere near a vote.

That said, if Lincoln and her allies can at least preserve the exchange trading and clearing requirements, that’ll amount to a major victory. Dragging these trades into the light of day is paramount because the OTC market is inherently stacked against end users. Right now, so many of these deals are opaque, and a whole host of costs bundled into the transactions aren’t disclosed or well understood. If derivatives were traded in the open, however, you’d shed light on all that and compress what’s called the bid-ask spread—the difference between the highest amount the buyer wants to pay and the lowest amount the seller will take to offload their product. That’s good for companies using derivatives—it lowers the cost for them.

All told, there’s no chance Lincoln’s bill will emerge weeks or months down the road untouched. But it’s laudable that she set the bar so high, and if she and her allies can preserve the transparency measures, that alone will be victory for financial reformers.