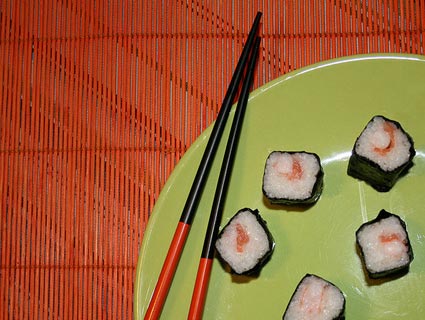 The oceans around Japan’s Fukushima Daiichi nuclear power plant are beginning to show troubling signs of radioactivity. Recent tests by TEPCO found levels far surpassing legal limits, iodine by 7.5 million times and cesium by 1.1 million times. As MoJo environmental correspondent Julia Whitty has reported in several recent posts, radioactive material is now entering the marine food web, and will likely only continue to work its way up. And ocean currents are carrying the contaminants far and wide. As a result of the increased radiation levels, several countries, including Hong Kong, Russia, and India, have enacted temporary bans on Japanese seafood imports. But so far, there is no such ban in the US.

So should I steer clear of sushi?

Some experts believe that there’s little cause for concern. Andrew Maidment, an associate professor of radiology at the University of Pennsylvania, points out that people are typically exposed to 3 millisieverts of “background radiation” every year. (Did you know that Fiesta ware, smoke detectors, and bananas all emit low levels of radiation?) Maidment says that according to data from TEPCO, eating seafood from near the Fukushima plant for a year would up your radiation exposure by .6 millisieverts, roughly a 20 percent increase from normal background exposure. “But all kinds of things can increase your radiation levels,” says Maidment. “People who live at high altitudes can easily be exposed to twice the radiation of people at sea level, for example.”

FDA spokeswoman Siobhan DeLancey assured me that so far, imported seafood that the agency has tested has not shown elevated levels of radiation. She attributed this in part to the ocean’s ability to both dilute radiation and protect marine life. “Airborne radiation settles on the surface of the water and acts as a barrier to fish under the surface,” she wrote in an email. “In the case of a direct release into the sea, the amount of water in the ocean rapidly dilutes and disperses the radiation to negligible levels.”

But other scientists are not so sure that ocean ecosystems are in the clear. Over at Yale e360 Elizabeth Grossman has a great, comprehensive rundown of what scientists know about radiation’s effect on sea life, and what they have yet to figure out. This is interesting:

How the radioactive materials released from the Fukushima plants will behave in the ocean will depend on their chemical properties and reactivity, explained Ted Poston, a ecotoxicologist with the Pacific Northwest National Laboratory, a U.S. government facility in Richland, Washington. If the radionuclides are in soluble form, they will behave differently than if they are absorbed into particles, said Poston. Soluble iodine, for example, will disperse rather rapidly. But if a radionuclide reacts with other molecules or gets deposited on existing particulates—bits of minerals, for example—they can be suspended in the water or, if larger, may drop to the sea floor.

Given all the unknowns, you’d think testing US oceans for radiation would be top priority for the government. Is it?

Sure doesn’t seem like it. I emailed the National Oceanic and Atmostpheric Administration to ask how the agency was testing for radiation in the ocean. A spokeswoman would only tell me that “NOAA is playing a supporting role in the Administration’s response effort.” When I asked her to describe exactly what that role was, she declined to answer.

Meanwhile, the environmental health advocacy group Food & Water Watch has criticized the FDA for inadequate inspection of imported seafood. FWW executive director Wenonah Hauter told me that the agency inspects only 2 percent of all seafood imports. The FDA’s DeLancey would neither confirm nor deny Hauter’s assertion, saying only: “While it’s difficult to quantify exactly how much of a given product is subject to inspection, FDA uses its knowledge of various import factors and vulnerabilities to target for the most efficient and effective public health intervention. Because of the potential for radionuclide contamination, we have chosen to screen all foods from Japan very stringently until the situation stabilizes.”

So which elements could eventually wind up in my sushi, and how long will they stick around?

It’s hard to find specific information about the health effects of radiation, but here’s what I’ve cobbled together: The three radioactive elements present in greatest quantities around Fukushima are iodine-131, cesium-134, and cesium-137. Iodine is of the greatest immediate concern, since both humans and sea mammals accumulate it in the thyroid. Luckily, it only has a half-life of eight days, so the levels around Fukushima are already dropping dramatically. The cesiums, on the other hand, are more of a long-term risk: Cesium-134 has a half-life of two years, and cesium-137, 30 years. Damon Mogler, director of the climate and energy program at the environmental advocacy group Friends of the Earth, told me that “cesium builds up in bottom feeders, crustaceans and bivalves, which in turn get eaten by bigger fish, and ultimately, people.” Maidment explains that since cesium is chemically similar to potassium, the body processes it similarly, meaning it can build up in muscle tissue.

What are the potential health effects of ingesting radiation from seafood?

No one knows yet whether the radiation from the Fukushima disaster will build up in levels high enough to cause human health problems, but we do know that accumulation of radiation in your body can lead to cancer. The EPA has a pretty good explanation of how it works here.

Are people eating less seafood because of radiation fears?

Yes, report Bloomberg and the NY Times. Several important fish auctions around the world were canceled in the wake of the nuclear disaster, and NPR reports that prices at Japan’s famous Tsukiji fish market have “plummeted.” FWIW, I called a local sushi restaurant called Tsukiji in Mill Valley, California, and they told me business had slowed down “a little bit” in recent weeks.