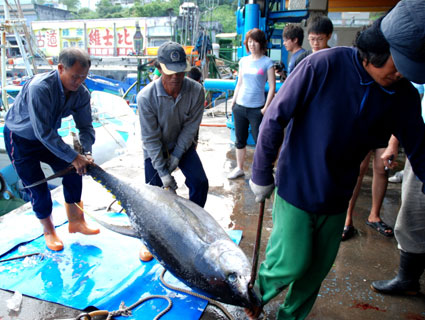 The Atlantic bluefin tuna’s days could be numbered. The tuna’s spawning population, which used to thrive in the Gulf of Mexico, has for decades been on a steep decline due to overfishing, shrinking by more than 80 percent since 1970. While acknowledging this trend, the National Oceanic and Atmospheric Administration announced today that the Atlantic populations of bluefin tuna did not warrant federal protection under the Endangered Species Act, at least for now. From the agency’s press release:

NOAA’s status review…indicates that based on the best available information and assuming countries comply with the bluefin tuna fishing quotas established by ICCAT, both the western and eastern Atlantic stocks are not likely to become extinct.

That’s a big assumption to make, especially considering that national fishing fleets routinely breach the standards set by ICCAT (the International Commission for the Conservation of Atlantic Tunas). ICCAT’s standards, moreover, tend to be much weaker than what scientists recommend: In November, the commission set the species’ annual fishing limit at about 14,200 tons, but the World Wildlife Fund recommends less than half that amount. NOAA’s decision is particularly puzzling because in 2010 the US was one of three countries to support a proposal to the United Nations to ban international trade of bluefin tuna until it rebounds in number, which was voted down after facing strong opposition from major tuna consumers like Japan.

One reason NOAA posits for rejecting the bluefin tuna protection is the declining number of tuna caught in the US, arguing that domestic catch levels have consistently fallen well below its ICCAT-designated quota. But that isn’t really a matter of choice, since the tuna’s population in the Gulf and West Atlantic Ocean have already declined so significantly. There simply aren’t fish left to catch.

A petition, filed last May by the Center for Biological Diversity, also raised concerns about the BP Deepwater Horizon’s effect on bluefin, following the European Space Agency‘s finding that the spill had reduced the young bluefin tuna by 20 percent. And as Mother Jones correspondent Julia Whitty reported last fall, the spill’s damages to deep-sea creatures (bluefin tuna included) could be far worse than we think.

But for now, NOAA has decided the study was flawed and inconclusive, and that it will wait to see what the agency’s Natural Resources Damage Assessment has to say in 2012 about the BP spill’s impact on the fisheries.