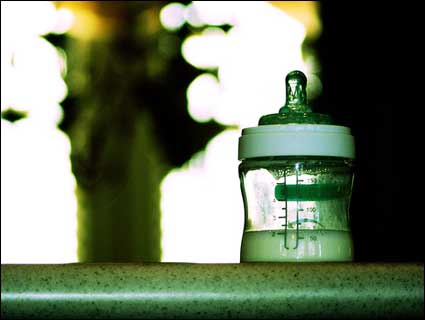 By now, the virtues of breastfeeding your baby are well known: Breast milk protects against obesity, allergies, Sudden Infant Death Syndrome (SIDS), and bad teeth, among other health problems.

Sometimes, though, for a variety of reasons, women can’t breastfeed. But a couple of scientists in Argentina just may have solved that problem—by genetically engineering a cow to produce human milk.

To achieve this strange feat, a team from the Institute for Biotechnology Research, the National Institute of Agribusiness Technology, and the National University of San Martin harvested human genes carrying two proteins that are present in human milk, but virtually non-existent in cow’s milk. They then used the cells to create a genetically modified calf embryo, which they implanted in an adult cow. The calf was born in April, and was named Rosita. (The Telegraph reports that the calf was nearly named after Cristina Kirchner, President of Argentina. Kirchner politely declined the honor, however, asking “What woman would like to have a cow named after her?” Wise words).

As an adult, Rosita should produce milk that is similar to humans’, in what will make for “a development of great importance for the nutrition of infants,” the Bueno Aires-based National Institute of Agribusiness Technology said in a statement.

But Nancy Mohrbacher, author of four books on breastfeeding, isn’t so sure. It “would be a big stretch, to say that it can be substituted for mother’s milk,” Mohrbacher says. That’s in part because cow’s milk must be processed to be sold on the market. (We learned recently that, apparently, the same goes for straight-up breast milk. Recall the brouhaha over London’s breastmilk ice cream). The refining process required for all milk could eliminate some of what would make Rosita’s milk human-like in the first place.

“Mother’s milk has live cells in it,” Mohrbacher explains. “If this milk, whatever it is, and however it’s different from regular cow’s milk, if it’s going to be sold to mothers, it will be processed, and so any living aspects of the milk would be killed, because that happens during any processing.”

Live cells are a big part of what makes breastmilk beneficial for infants. Leukocytes, for example, are living cells found in breast milk that help fight infection. By Mohrbacher’s reasoning, such cells—because they are living—would likely be maimed in the milk-refining process, making this cow-milk-turned-human less healthful than the real stuff. That processing, though, wouldn’t necessarily destroy all of the substance’s breastmilk-like benefits—certain baby-friendly proteins and enzymes could probably withstand pasteurization.

Even so, the economics of producing cow-human milk at scale are pretty daunting. And, um, unsettling. One Rosita is weird enough. But a whole herd?