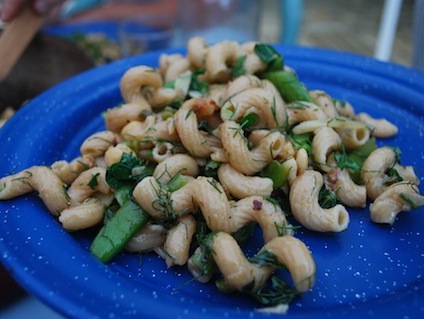 Welcome to my occasional cooking column (a continuation of something I started on Grist). The idea of Tom’s Kitchen isn’t to show off my flashy cooking skills (which are actually quite modest); or rub your face in how amazing it is to cook on a small veggie farm. Rather, what I want to do is contribute to a tradition established by much more accomplished cooks than me—e.g. Deborah Madison, Mark Bittman—of showing that cooking delicious, healthful food really isn’t all that hard or time-consuming.

When I first started cooking seriously 20 years ago, I would grab an “authentic” cookbook centered on some faraway land—say, Paula Wolfert’s classic 1973 opus Couscous: And Other Good Food from Morocco—choose some recipes, jot down a vast shopping list brimming with esoteric ingredients, and set off on a day-long adventure (and a long night of dishes). You can learn plenty from that style of cooking—I have—but really, it’s a hobbyist’s activity. It’s not going to put dinner on the table on a Tuesday night after a long day at the office (or of writing and farm work). These days, my cooking is simpler: I see what fresh ingredients are available, check out what’s in the pantry, and figure out some quick way to bring it all together in palatable fashion. It’s often influenced by techniques and pantry ingredients I picked up over the years from the likes of the great Wolfert, but there’s no attempt to be authentic or fancy or do special shopping. There’s just no time.

I think this style is a much more user-friendly way of drawing more people into cooking—a critical task, I think, when tens of millions of people have no idea how to cook and outsource their diets to the food industry.

So, for Tom’s Kitchen, what I usually do is document some dish I’ve thrown together for myself and my mates at the farm. It’s true that I have access to great fresh ingredients, but nothing I use can’t be readily found at most farmers markets or CSAs across the country. In fact, the column is ideally suited for people who get most of their fresh food from these sources or would like to—and for those who grow their own. My intention is not that you replicate my recipes precisely by shopping for each ingredient I mention. Rather, it’s that that they inspire you to try something similar with whatever good stuff you have on hand.

With no further ado: 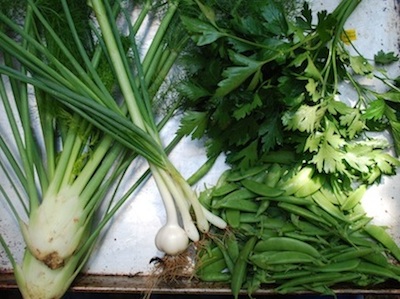 Pasta With Snap Peas and Fennel

1 pound whole wheat pasta.* For this dish, I used a short, twirly, tubular cut called gobetti. Other cuts work, too.

Extra-virgin olive oil, for sauteeing and also for dressing the finished pasta

1/2 to 1 teaspoon “radical salsa,” or a pinch or two of crushed red chile pepper

3 small heads of fennel, with fronds

About a cup of freshly grated Parmesan or other hard cheese, plus a chunk for grating at table

Place a large cast-iron skillet over low heat, and add enough olive oil to cover the bottom. Peel and mince the green garlic. Separate the green and white parts of the spring onions. Mince the white part; reserve some or all of the green part for garnish. And the chopped onion whites and garlic to the pan and stir; add the radical salsa or chile flakes, and a pinch of salt. Stir again.

While that mixture is gently sauteeing—be careful that it doesn’t burn by giving it an occasional stir—prep the fennel. For each bulb, trim away the stalks and the root end (reserve some of the green tops, known as fronds, for garnish). Peel and discard tough outer layer. Cut bulb length-wise, and then cut cross-wise into thin slices. Add to the skillet along with another pinch of salt; turn heat heat to medium, stirring often to keep fennel from scorching. 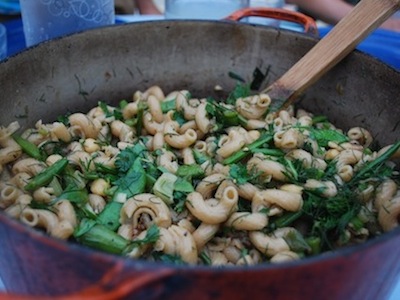 While the fennel is sauteing, prepare pasta using the great food-science writer Harold McGee’s radical, low-water, fast method (which generates a valuable pasta pot liquor that you’ll be adding to the skillet later).

Add the chickpeas to the pan, turn heat to low, and let saute a bit with the fennel mixture. Meanwhile, prep the snap peas. Snap off stem ends of each one; then very coarsely chop them into bite-sized pieces. By now, the fennel should be soft. Return heat under the pan to medium and add the snap peas along with another pinch of salt and saute, stirring. You want them to retain their crunch, but pick up the flavor of the aromatic veggies already in the pan. This will only take a couple of minutes.

When the snap peas are done, dump the contents of the skillet into a large bowl.

Chop the parsley together with the onion tops and and fronds from several inches of fennel top. Add to the bowl. Now your pasta should be almost ready. Before straining it into a colander, use a metal ladle to grab a half-cup or so of the pasta water and add that to the bowl, too. Strain pasta and dump into the bowl. Now add grated cheese, a generous lashing of olive oil, and a good grind of black pepper. Gently fold to mix. Taste and see if it needs salt; add more if so.

Serve immediately, passing a chunk of hard cheese and a grater at table.

* A lot of people think whole-wheat pasta sucks. I think they’re wrong. I’ve lost interest in eating refined white flour, and turned to whole-wheat pasta several years ago. It has grown on me, and now I actually prefer its full, nutty flavor. My go-to brand is Bionaturae.