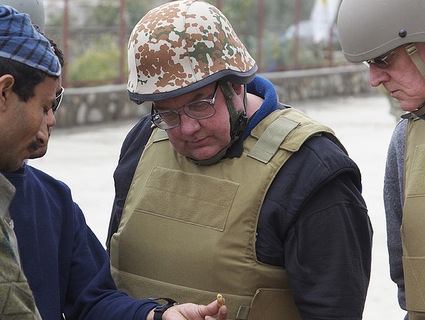 My post on the organic-farming surge in Gaza got me thinking about ag-development policy—and how what’s happening in occupied Palestine goes against the grain, so to speak, of most efforts to bolster farming is distressed areas.

Responding to immediate needs for food in a place where water is scarce, agrichemicals are hard to come by, and trade is severely limited, aid agencies and local policymakers in Gaza are urging farmers to grow food for themselves and their neighbors to eat using water-efficient, low-input techniques. And what they’re growing isn’t industrial crops like corn and soy, which need to be subjected to heavy processing before they can be eaten, but rather nutrient-dense, ready-to-consume fruit, vegetables, and fish.

How different is this setup from the norm? An example recently crossed my desk in the form of this Huffington Post item by Howard Buffett, son of gazillionaire Warren. Now, Buffet the younger is not your standard trust fund baby. According to his bio, he owns and operates a 1,240-acre corn-and-soy farm in Illinois and manages another 400-acre farm in Nebraska. His farming efforts have netted him ample federal crop subsidies over the years. In the early 1990s, he worked as an executive and board member for grain-trading and processing giant Archer Daniels Midland. He recently joined the board of directors at Coca-Cola.

But Buffett mainly occupies himself as a philanthropist, putting some of his family’s ample wealth to work in various ag-related projects in Africa. As this 2009 Wall Street Journal article shows, Buffet takes a highly engaged, hands-on approach to his development work. Here’s a sample:

After a meeting with farmers in Fufuo, Ghana, Howard Buffett stood up to shake hands, African style. He extended his right arm, marked with a faint scar from a cheetah bite, and then launched into a rapid combination of finger snapping and palm slapping.

Now, I by no means intend to question Buffet’s motives for working in Africa. The Journal portrays him as a tireless fighter against hunger, and I don’t doubt it. But considering that US philanthropists are increasingly setting the agenda for agriculture development in Africa—the biggest player of all is the Bill and Melinda Gates Foundation, to which Howard Buffett’s father has given billions—it’s not unfair to question his vision for change.

In the HuffPo piece, Buffet lays it out. The broad argument he makes is not objectionable. He is defending a perfectly sensible program within the UN’s World Food Program (WFP) called Purchase for Progress, which turns traditional food aid on its head. In the old system, the UN would alleviate hunger by taking money from donor governments like the United States and using it to buy grain and other ag commodities from US and European farmers;  it would then distribute the food to people facing extreme hunger. Purchase for Progress shakes that paradigm up by buying the food from farmers in the global south—thus alleviating hunger and pumping money into the ag economy in one swoop.

US shipping interests have lashed out at Purchase for Progress on the grounds that it cuts them—as well as large US grain traders like Archer Daniels Midland and Cargill—out of the (quite profitable) supply chain for food aid. The argument is monstrous; it’s short form might read: “We transnational corporations demand a cut of the money intended to alleviate the hunger of desperately poor people.”

So here’s Buffet’s response to the shipping industry’s demand for its cut of the aid action:

[Purchase for Progress] provides training, access to credit and market access for poor farmers. The objective is to use WFP’s buying power as an interim step. It is expected that farmers will eventually forgo sales to WFP and in the future sell to companies who operate in their country like ADM, Bunge, Cargill, Maseca [the Mexican corn-flour giant part-owned by ADM], or Tiger brands. Once these farmers learn about contracts, quality requirements and delivery obligations while building a credit rating, they have found a permanent way out of poverty. They can eat three meals a day and send their children to school.

So according to Buffett, the goal of development policy for African farmers is to get them to scale up to the point where they can sell industrial commodity crops to the globe’s big grain buyers. When they do, there will be another benefit for western transnationals:

One point that seems to be missing in this discussion is that as countries work their way out of poverty, increase their GDP and overall wealth, they become consumers of goods produced from countries such as the US. Their purchasing power increases and they import our products—creating US jobs and sustaining our industries…

Now, critics of industrial agriculture like me are often dismissed as pie-eyed idealists. But this is pie-eyed idealism. To get big enough to sell profitably to massive companies like ADM, farmers will have to scale up, buy annual doses of chemical fertilizers, pesticides, and high-tech seeds  (another boon to US companies that Buffett could have mentioned), and invest in massive machines. All of that requires taking on vast amounts of debt, which makes farm operations extremely vulnerable.

Indeed, the path to prosperity promoted by Buffett actually leads to desolation in farm country. The United States provides a telling case study. As our agriculture began to scale up and industrialize after World War II, farms began to close at the rate of hundreds of thousands per year as input prices rose and crop prices fell. In 1940, the US had 6 million active farms. By 1990, fully two-thirds of them had shut down. The survivors scaled up—according to the USDA, the average US farm size nearly tripled between 1940 and 1990.

True, the surviving farmers have managed to become the prosperous consumers of corporate goods that Buffett envisions. But it’s worth noting that the incomes of large-scale US commodity farmers are propped up by two significant government programs: crop subsidies and biofuel mandates. (Buffett is also an ardent corn ethanol booster). It’s hard to imagine the government of, say, Ghana coming up with similar largess.

The more vexing question, of course, is what happens to the millions of farmers who would be forced off of the land in Buffett’s vision of industrial agriculture for Africa. In the postwar United States, a manufacturing boom greeted former farmers and their offspring, giving them ample opportunity to join the middle class. As Nick Cullather shows in his recent book, The Hungry World—which I reviewed here—things went rather differently in Mexico and India when their farmers turned to industrial agriculture in the postwar years. Some of them gained manufacturing jobs, but millions were forced into chronic poverty in urban shantytowns.

I fear something similar will happen in Africa if Buffett’s aspirations come to pass. And I keep thinking about the contrast with what’s happening in Gaza: the push to grow food for hungry people to eat, not industrial crops to be bought and processed by transnationals. I wonder if Gaza, cut off from global agribusiness, might be in the process of developing an approach to agriculture that actually works for farmers and their surrounding communities.